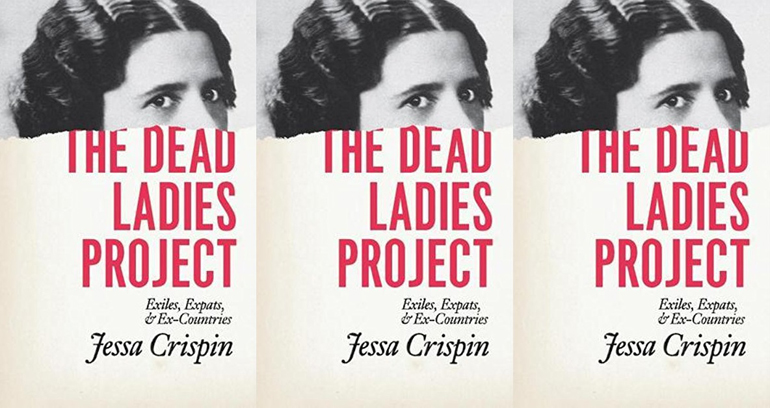 Summer always puts me in the mood to travel, but sometimes I only travel to a beach chair under an umbrella armed with a very good travel book. Travel books mean different things to different people, and I’m most partial to travel books that don’t just gawk at Big Ben, the Eiffel Tower, or what-have-you. I like to get lost in the back alleys, the deserted beach fronts, and the quaint back roads followed by travelers who are looking for something besides a great Instagram photo. This summer, I decided to take Jessa Crispin’s travel memoir The Dead Ladies Project with me to my back porch for some summer reading.

For those who may not know, Jessa Crispin is a woman who wears a lot of hats: writer, editor, tarot card reader, founder of the iconic book lovers’ blog Bookslut. She famously refuses to wear the feminist hat. She does not mince words. If you think she is hard on the women’s movement, wait until you see how hard she is on herself.

In 2009, after shooing the police out of her Chicago apartment by convincing them she had no plans to kill herself (even though she sort of did) she sold or gave away everything that didn’t fit into an easily liftable suitcase, grabbed her laptop, and left.

Instead of suicide, Crispin traveled to Europe chasing literary ghosts and looking for answers. The resulting memoir and travelogue takes on the twin themes of trying to understand the lives of others while hoping to make sense of her own confusing history. The two complement each other well without emphasizing one narrative over another.

“My thoughts don’t need control,” she writes. “Only replacement, by people’s better thoughts.” Dead Ladies Project has many storylines, perhaps to match the many anxious ideas running through Crispin’s critical and fevered brain.

In this literary travelogue, we travel with the author through a series of unglamorous apartments and hotels across Europe, dining on roast chicken and brussels sprouts, drinking vodka, rendezvous-ing with her very married lover, and of course sleuthing around literary haunts.

The secret to the book’s success is Crispin’s willingness to let herself be a stranger in a strange land. When the book first appeared she spoke to Travel and Leisure about the responsibility she felt writing about places she was only visiting. “Travel writers have an even greater responsibility [than travelers or tourists] because then they are telling stories about this place that has nothing to do with them, and there is a very long history of travel writers doing and saying terrible things.”

She begins her journey in what is for her an obvious place, Berlin. Crispin sets up home to discover more about William James, author, philosopher, and brother of novelist Henry. The philosopher’s works are a source of inspiration and comfort for her. She sympathizes with James’s feelings of loneliness during his time in Berlin more than a century ago. She takes a train to the Henry James Center at the University of Potsdam and finds herself in one tiny room gossiping about James with the center’s director, a university professor from Iceland. This is the kind of thing I always hope will happen to me when I travel abroad, to find something surprising and maybe a little bit sad and a like-minded person I never expected to encounter to share it with.

“I want to bend time and snatch William out of his lonely gatehouse,” she writes after her visit. “But I know how this story ends. He has to stay in Berlin a bit longer so that he can become a great man. And me? Who knows what I’m doing.”

And so she moves on to Trieste, to the one place in the book that is nothing more than a visit to a train station to wonder about Nora Barnacle, the put-upon wife of James Joyce and allegedly his inspiration for Molly Bloom. Crispin heads to the train station where Joyce famously left Nora, to whom he was not yet married, sitting on a suitcase while he went off supposedly to find lodging. He disappeared, leaving Nora perched on her suitcase overnight. It seems Crispin’s original plan was to find out something new about the woman who was famous for being ignored by even the most diligent Joyce biographers. In the end, she gives up. “No amount of digging through the written record will help us get into the experience of Nora Barnacle,” she writes. “As much as I write around that image of her alone in the dark, Nora is mostly blank space and dead air. She was not dedicated to penning herself down . . . And we humans are not good with blank space. We fill it, unconsciously with bits of ourselves, with what we just assume would be there. I put my hat on Nora’s head and say ‘Look how we share the same taste in hats!’”

And that’s how it goes when you travel, you go in search of something, a forgotten historical figure, long-lost ancestors, a perfect bowl of pasta, love. I have a friend who insists the Moulin Rouge doesn’t exist because in many trips to Paris over the years, she’s never been able to find it. Sometimes no matter how far you travel to find something, there’s a solid chance that what you went there to find will have to be left to the imagination.

Sometimes when traveling, it’s impossible not to be seduced by its myths and legends as Crispin is when she arrives in Galway, in the Republic of Ireland. She’s there to trace the footsteps of Maud Gonne, the English-born Irish revolutionary, friend, and collaborator of William Butler Yeats and rumored black magic practitioner. But the secret to Gonne’s success comes to her wrapped in myth and religion and politics that it takes some time to assemble, like pieces of a complicated jigsaw puzzle. What starts out as a frivolous, last-ditch effort to find a beloved lost necklace, she leaves a shot of whiskey and a slab of butter on her opened windowsill in hopes that the legendary fairies might appear to help. The next day, she locates the missing item. Coincidence or a bit of Irish magic? From here she explores the legend that Gonne sold her soul to the devil. “But what had she sold her soul to the devil for?” she asks. “The whole point of black magic is to work it so that your will can be done. It is the opposite of the Christian concept of Thy Will Be Done and We Will All Just Sit Around and Try to Adjust. . . . Black magic was a way to say I do not move for the universe, the universe moves for me.”

Sitting in her Galway flat, Crispin connects the legend of Maud Gonne with the fairies who may or may not have found her lost necklace and the Protestant “rule by anxiety” over Catholic Ireland at the start of the twentieth century. Once the mystery is solved, she knows she has to go. And then she is off to her next destination, her next literary icon, and her next mystery.

The combination of history, travelogue, and self-examination is thoughtfully blended and an ideal escape into the far off worlds of travel and ideas. She doesn’t judge or condescend to her heroes or to the residents of any of her stops. It’s a European vacation with the smart friend you’ve always wanted who knows the secrets of all the great writers but is completely willing to find out even more.