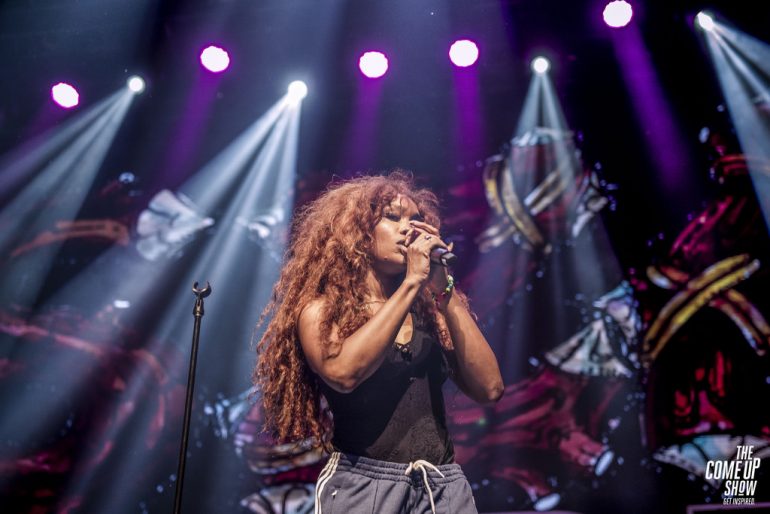 SZA’s debut studio album, Ctrl, impresses fans with her lyrical honesty. In a lengthy and confessional letter to Drew Barrymore, SZA wrote how Drew’s movies Poison Ivy and Never Been Kissed shaped her and eased her anxiety “about being awkward and having crooked teeth.” By watching the formerly troubled icon on screen, SZA became comfortable with herself, and apparently, bestowed the benefits of self-discovery upon her audience. However, even though Ctrl addresses young love in “Drew Barrymore,” SZA also offers sound resolution to grown woman doubts with songs like “Garden (Say It Like Dat).”

SZA’s mellow voice and soothing lyrics remind us of teenage angst and grown woman insecurity, such as in “Drew Barrymore” when SZA sings, “I’m so ashamed of myself think I need therapy-y-y-y” and in “Garden (Say It Like Dat)” when SZA sings, “Hope you never find out who I really am.” Due to SZA’s harmonic sound and relatable lyrics, it’s impossible not to reminisce on the anxiety of youth and the longing for unconditional love, even when you’re hiding from the one who has the greatest power to unmask you.

You came with your new friends
And her mom jeans and her new Vans
And she’s perfect and I hate it, oh so glad you made it
I’m so glad you could come by

SZA’s deep powerful voice taps into teenage angst with “Drew Barrymore.” With the words, “You came with your new friends,” SZA’s observation suggests a level of competitiveness. With one new girl in particular, SZA’s determined that she’s regretfully perfect. Even in her uncool “mom jeans” and hip “new Vans.” Then, SZA employs a paradoxical line to reveal her conflictual feelings: “And she’s perfect and I hate it.” On one hand, SZA succumbs to the youthful envy of superficially thinking another female is flawless. But, due to the girl’s lack of imperfections, SZA sardonically says she can’t stand her. Nevertheless, even if SZA is not in the mood for any new friends, she’s glad the focus of her interest has arrived.

For the “Drew Barrymore” music video, SZA is featured lying back against a couch. Like a silent stock character, large buildings loom in the background, shrinking her petite figure, as she stands against the huge window. All the while, she wallows in loneliness when he’s not there. She sings about him, the object of her affection, as she takes the subway solo. And, as she drifts further into her tale of love deferred, she’s in the foreground of a Laundromat.

She’s seen in nothing but a purple wide rimmed hat, bending down, knees inward propped up only by her plastic clear heels. In the background, clothes are swishing behind the washer machine glass. Here, she’s emotionally exposed, but she’s trying to clean the dirty laundry of her past. Nevertheless, she’s afraid of being unmasked for the woman she is. In “Garden (Say It Like Dat),” SZA’s resistance to unrequited love is in line with the other songs on her album.

With the words “Hope you never find out who I really am,” SZA sings behind the mask lovers wear. SZA is fighting the insecurity that we’ve all felt. If he learns she’s not perfect or that she’s a flawed individual, will he uncover her disguise and “never love” her for her authentic humanity? But, like any lover, when he says he loves her in the right way, the tone of the song shifts from existential doubt to hopeful relief: “Oh, I believe you when you say it like that / You must really love me.” Subsequent to her pleas, the raspy voice of a senior is heard in the background: “You don’t got shit to say to me / I ain’t got shit to say to you.” And, even the love stricken SZA must concede to the elder’s wisdom: “Granny, and that’s the truth.”

Even though SZA bears her true soul in the “Drew Barrymore” video, the audience never sees the object of her affection. But, as SZA sits alone, at night on the steps, Drew Barrymore, the movie star, walks by. All angst derived from the fear of remaining invisible dissipates by seeing’s Drew’s smile. Ironically, in real life, Drew Barrymore expressed her pleasure at having a song named after her on The Tonight Show Starring Jimmy Fallon. And, with the song, “Garden (Say It Like Dat),” SZA longs for visibility as well. Yet, she’s afraid to reveal the vulnerability that all woman feel. Somehow, she summons the courage to express herself. Ultimately, SZA’s authentic storytelling unmasks her bruises. With raw vulnerable truth, it’s easy for her listeners to say in their minds, “Ah, SZA’s just like me.”