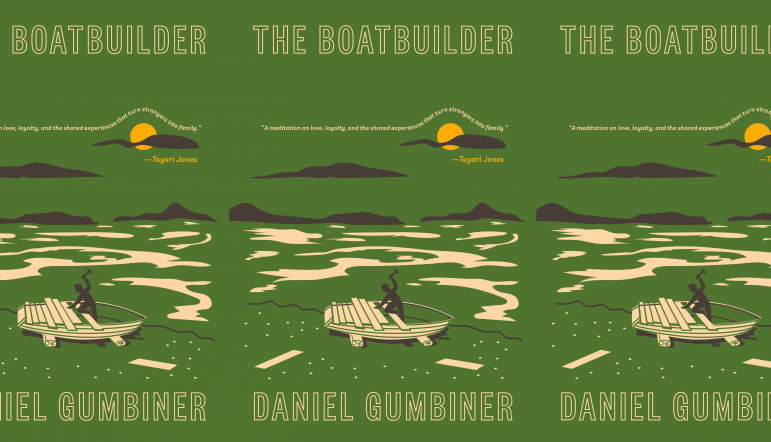 The Boatbuilder
Daniel Gumbiner
McSweeneys | May 22, 2018

Eli “Berg” Koenigsberg is not in a good way. He has a brain injury from a concussion, he’s addicted to opioids, and he’s breaking into homes to steal the drugs he needs. Berg is a passive twenty-seven-year-old, not really sure how the past brought him to the present, but he knows enough to get himself out of San Francisco and to move up to Talinas, a fictional town in Northern California. When The Boatbuilder, a debut novel by Daniel Gumbiner, begins, Berg is house-sitting and beginning to get to know people in this community. Over the course of the novel, which takes place over the following year, he will become part of this place, as he moves from one job to the next, one home to the next, always conscious of his addiction and his pain, wanting to escape both but struggling to do so, as the two are intricately joined.

The reader goes on this winding journey with Berg. At first, I wasn’t sure I wanted to tag along. The lost, drug-addicted 20-something is, sadly, a bit familiar. But I found myself drawn into Berg’s story, wanting to learn more about him and this community in which he finds himself, willing to follow all the twists and turns. Gumbiner writes beautifully, and he creates a unique world here. There’s something so gentle about Berg, in his awareness of the world and the people around him. He cares. He has a sense of humor. He wants to turn his life around.

The novel gains momentum when Berg falls in with Alejandro, a master boatbuilder who’s old enough to be Berg’s grandfather. Berg knows, almost immediately, that this is the place for him:

It was like being in some kind of cathedral. Tall ceilings and tall windows and boats hanging from the rafters, strung up by thick cords of rope, listing gently in the air. Everything shot through with columns of cold morning light, smelling of straw and saltwater and fresh sawdust.

Alejandro serves as Berg’s mentor, teaching him the basics of boatbuilding but also providing him with an example of a way to be. The novel certainly has the hallmarks of a monomyth, with many of the expected totems of the hero’s journey: the mentor (Alejandro), a series of obstacles (including Berg himself), and the journey from one world to another and back again (Berg’s struggle to overcome his addiction).

The novel moves along at a quick pace, almost always staying in the present moment. There are occasional flashbacks for Berg—to the concussion, a reference or two to his parents, to his life in San Francisco—but, mostly, this is a novel that moves forward in time. Gumbiner makes this forward momentum work, in part, by using short chapters that are almost always complete; there’s an arc in each chapter that feels whole. Things are rarely left in a state of flux, with few cliffhangers—except for a literal one, when a car is sent over a cliff—waiting for the next chapter to fill in the missing pieces.

And then, late in the novel, after Berg hits rock bottom, the chapters almost completely disintegrate. Several of those chapters are only several sentences long. As Berg puts himself back together, the final chapter returns to a usual length. That’s a lovely narrative move—to have the form so beautifully echo the content—and it’s a wonderful and surprising moment for the reader as well. Just as Berg is drawn into the boatbuilding world by learning the intricate tasks of building a boat, it makes sense that the novel would be carefully constructed as well.

Likewise, much of the novel is interested in exploring the act of creation and, by extension, the world of storytelling. The philosophical advice that Berg gets from Alejandro is about life, but it’s also about the act and process of making art. At one point, Berg tells his girlfriend: “I’ll know how something should be done, but I can’t necessarily do it. My understanding always outstrips my skills.” He’s talking about boatbuilding, but he could be talking about any creative process. Later, he learns a specific technique, and he realizes: “It required a meticulous focus, but it rewarded you for that focus. There was nothing more satisfying than making a slight alteration and watching that alteration ripple through the rest of the design, relieving it of its imperfections.” He learns about process but he also learns about people: character after character tells Berg stories that help him to understand who they are, and who Berg is as well.

There are times here when the details can overwhelm the plot and when I couldn’t quite understand how certain scenes or events contribute to the overall story. A minor-league baseball team plays a part. Dialogue can go on a bit long. Alejandro teaches a class about celestial navigation. And yet, there are moments when Gumbiner’s willingness to allow his characters free rein permits the novel to open up into unexpected truths. Berg’s girlfriend tells a long story about her childhood that, in the moment, seems superfluous. But echoes of that story return later in the novel, and it starts to feel as though part of Gumbiner’s intent here is to show how lives are made up of the quotidian, that a life—just like a novel—is an accumulation of moments.

The novel begins with an E.B. White quote to his wife: “I have had an entirely new feeling about life ever since making an ax handle…” This idea of returning to the basics is reminiscent of several religious philosophies, including the Shakers, whose motto begins, “hands to work.” A thread of spirituality runs through this novel from Berg’s rabbi grandfather to the way in which Berg seems to gain strength from his belief in this community. And communities like this exist. Almost twenty years ago, my sister-in-law decided to move to a similar place in Northern California. She is still there, and she has found, I think, exactly what she longed for: a group of like-minded individuals who love and support each other. A family. This, by the end, is what Berg finds as well.