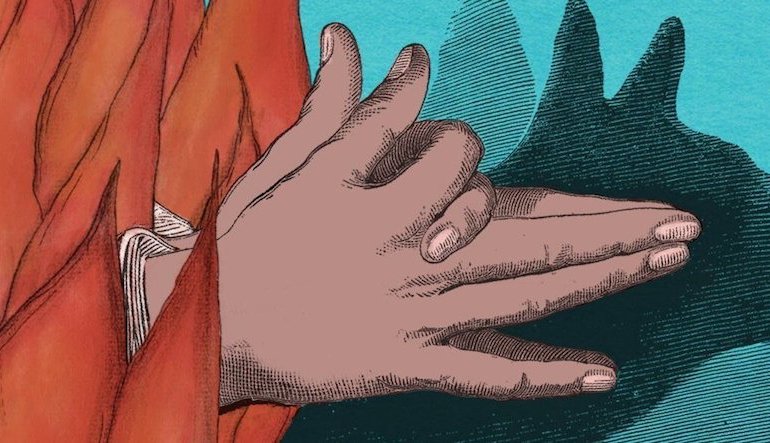 When we tell stories about magic, it’s easy to forget that we’re not just exploring the marvelous and mystical, but also illustrating the dynamics of power and control, the dominance of certain forces over others. This notion of control is about more than just “good and evil”—in core childhood narratives, elements of magic constantly compromise the bodily autonomy of women, from the prick of your finger on an enchanted spinning wheel to the loss of your voice in exchange for legs. Before I even learned how to read, the body was the original plot device.

These days, my thoughts on consent still filter through canonical bodies: Daphne, desperately fleeing Apollo’s sexual advances, loses ownership of her body in a different way when she transforms into a laurel tree; Zeus impregnates Danaë as a sudden shower of gold. The list goes on, with storytellers moving gracefully between active and passive voices in a kind of dance where consent perhaps lies somewhere in between.

I approached Helen Oyeyemi’s short story collection What Is Not Yours Is Not Yours with all of this narrative baggage in my mind.

Perhaps the most conspicuous story where bodies and magic collide in the collection is the third one, “Is Your Blood As Red As This?” which features characters who attend a school for puppeteering. The supposed personal agency of the puppets shifts throughout the narrative. At first, Oyeyemi keeps them generally inanimate while inserting little turns of phrase that provide a shimmering ambiguity:

Sometimes [Gustav’s] puppets won’t perform at all. He just lets them sit there, watching us. Then he has them look at each other and then back at us until it feels as if they have information, some kind of dreadful information about each and every one of us, and you begin to wish they’d decide to keep their mouths shut forever.

Within just two sentences, the puppets’ autonomy radically changes multiple times: they won’t perform; he lets them sit there and has them look at each other; then you wish that they’d decide to keep their mouths shut forever. The speaker, Radha, grants the puppets independence in a circular motion that first threads through the vague second-person addressee, then through that addressee’s wish. This unstable positioning of agency leaves the reader wondering who’s in control.

All of this occurs in part one, subtitled “(NO).” The “no,” which might be answering the question “Is your blood as red as this?” marks the whole section with a tone of refusal. After all, so much of our recent feminist dialogue around consent has surrounded this single word; no writer of the body can ignore the refrain of no means no (and, more recently, yes means yes—as some feminists shift toward thinking more about the need for affirmative sexual consent, rather than simply the absence of a no).

Radha speaks of Myrna’s puppeteering talents in a way that brings this refusal to a kind of brink:

I noticed that you didn’t make a voice or a history for the puppet, but you became its voice and history. I’d have liked to admire that but felt I was watching a distressing form of theft, since the puppet could do nothing but suffer being forced open like an oyster.

The violent diction of “theft” and “forced open like an oyster” is especially poignant in the way it characterizes a loss of autonomy of “voice and history,” not simply of the body. And what is a self without a voice and history? As part one comes to a close, Radha meets Gepetta, the puppet who will become the narrator of part two. Radha seems to feel this narrative power shift as it comes: “Though we both stood still I felt the marionette advance upon me, and without moving I shrank away.”

In part two, “(YES),” Gepetta takes ownership of the story and turns it in her own direction. We learn that she was once a human woman who took care of the puppets in the storeroom, but when she was dying, they assembled a new body from their spare parts. She had tried to resist, but in the end her entire body was replaced: “I was on my way out and they thought they were helping me; instead they turned motion and intelligible speech into a currency with which personhood is earned.”

Oyeyemi’s magic has no “rules” or system of logic. Even the characters themselves are fluid, with shifting definitions of selfhood, shifting perspectives, shifting pronouns. In these stories, no human structure is allowed to remain static.

The idea that consent is “simple” is often part of our dialogue when it comes to educating about sexual violence, but the truth is that lived experience will always resist simplicity. What Is Not Yours Is Not Yours accepts the fluidity not only of consent, but also of gender and other forms of structured logic—even systems of magic. Oyeyemi brings that fluidity to the surface and chooses to dwell there.