Home
»
Interviews
»
The Care that Goes into Translation: An Interview with Lisa Hayden 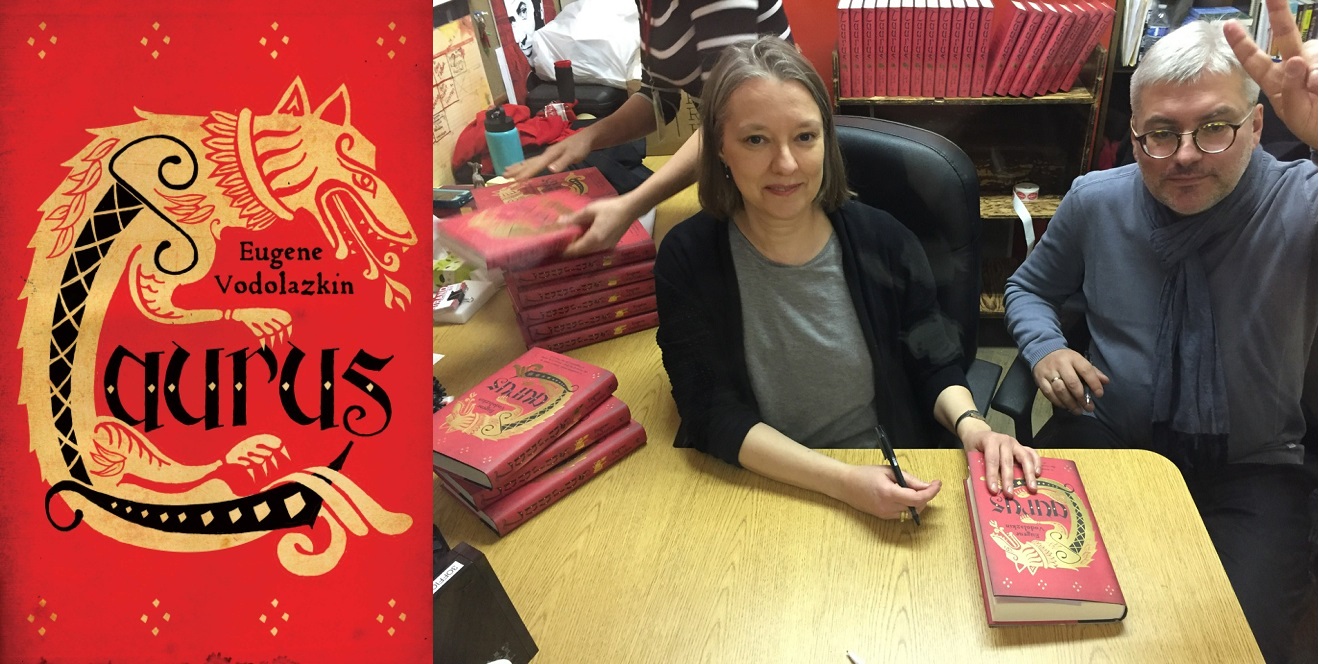 A central theme of the novel Laurus is that time is a spiral. Events and themes recur throughout history, but each time with a slight variation. The structure of the work, by Russian author Eugene Vodolazkin, mirrors that premise. Scenes and pages reference and reshape each other constantly. Though the book follows an ascetic holy healer in the Middle Ages, the events echo back to Biblical times and forward to present-day, literally. The book includes anachronisms like plastic water bottles showing up in the 15th century, as well as a character who sees very specific, frequently mundane visions of the 20th century.

Which makes the book’s translation into English, out last year from Oneworld, all the more impressive. Lisa Hayden had to mix contemporary slang, Biblical intonations, Middle Russian/English speech, and rural dialect together into something comprehensible and it worked beautifully. Hayden runs the Russian Literature blog Lizok’s Bookshelf. She received the Read Russia Translation Prize for contemporary literature for her work on Laurus.

Graham Oliver: In the translator’s note, you talked about the challenge this book posed given its anachronisms and wildly varying language. Can you give us a few specific examples from the text that really kept you up at night making the decision of how to translate it?

Lisa Hayden: It’s funny, I rarely lie awake at night or even puzzle at length at my desk over individual decisions. I set aside most difficult decisions because resolutions always seem to come to me when I least expect them to. Usually when I’m either driving or taking a shower, which means I have no way to write down the answers so have to remember them. All the big decisions, the ones I think of as policy decisions, such as which Bible to use as my primary helper in Laurus, were made months earlier. The same goes for the thornier question of how to handle most of the names—to transliterate or to Anglicize?—in the novel.

In terms of individual difficulties, one word that’s in my notes is “highwaymen,” which I’d initially rejected—considering words like “marauders” and “brigands”—but then found in William Manchester’s A World Lit Only by Fire. Another word that was troublesome was “quarter,” in “Rukina Quarter”: the Russian word can also have a meaning that’s closer to village, but when I conferred with Vodolazkin, as I did regarding several words, it was clear we really wanted the sense of apartness or separateness that “quarter” carries. Though it may sound tedious to be so picky about individual words, in a book like Laurus, where the syntax is so spare and the stylistic variations so great, individual word choices felt especially important to me because bad choices could break the mood in the wrong way.

GO: There’s a sort of weird evocation that the Middle Ages has for English readers. The older language itself has associations with authority and religion, whereas the time period it came from is connected with ignorance. Can you compare the effect the old Russian for a Russian reader versus the old English for an English reader? Is there a difference?

LH: Although it’s hard for me to compare archaic Russian and archaic English—my knowledge of both is completely unmethodical and applied since I hadn’t used them much before this translation—I can say there is a certain similarity because Vodolazkin and I both made our choices guided by intuition. There were times when I blended words from multiple English-language translations of the Bible to achieve a certain sound or feel. Vodolazkin told me he worked very similarly when writing the book, choosing words that he felt sounded right together. I can’t even begin to tell you how happy it made me to hear that! I hope my old language, which a Russian translator friend called “Pseudo Old Language,” has a similar effect to Vodolazkin’s old language. Judging from reviews and reader reactions, it seems to.

GO: Your translator’s note outlines a large amount of research you did to bring this work to English. Can you talk some about when you choose to do independent research versus consulting with the author? A specific thing you mention is making a decision about how to translate names of herbs, some of which were fictional, and you consulted an herbal medicine book.

LH: I probably did a lot less research than it sounds like I did! I amassed a shelf of books written in, set in, or otherwise about the Middle Ages but didn’t read most of them in full. As for consulting with authors, I always try to have as few questions as possible because I don’t like to bother them, though I’m extraordinarily fortunate to work with authors who are friendly, highly collaborative, and even seem to enjoy answering questions. Beyond wanting to help me get things right, I think it’s interesting for them to see the care that goes into a translation.

The plants are an interesting case because most of them are real plants that can be researched—that’s where the modern-day herbal medicine book came in handy. Some of the herbs, though, don’t exist in nature and Vodolazkin is only too happy for his translators to invent colorful names for them; folk names for real herbs can be pretty quirky anyway—a book that I bought about the history of herbals more than confirmed that. Vodolazkin chose herbs for the novel so they’d sound interesting, so it’s fitting that he encourages his translators to do the same. He now refers other translators to me when they (inevitably!) ask him about the herbs. It’s been a lot of fun to meet so many of my Laurus counterparts by email because of those plants.

GO: Give us some Russian literature recommendations. Any recent or upcoming translations you’re excited about? Anything that hasn’t been translated yet that surprises you?

LH: Looking at the list of 2016 translations on my blog, I blush a bit because I’ve been so slow to read more Gaito Gazdanov, whose The Flight, translated by Bryan Karetnyk, came out from Pushkin Press earlier this year. From last year’s bunch, I especially admire The Penguin Book of Russian Poetry, edited by Robert Chandler, Boris Dralyuk, and Irina Mashinski: they included a distinguished group of translators and the commentaries are colorful. I’m already gathering next year’s new translation list and am especially intrigued by Anne Fisher’s translation of Ksenia Buksha’s The Freedom Factory for Phoneme Media. Of course I’m also excited about the books on my personal to-do list, though they won’t be out until later: Vodolazkin’s The Aviator and Guzel Yakhina’s Zuleikha Opens Her Eyes, both for Oneworld Publications, plus Margarita Khemlin’s Klotsvog, for the Russian Library series published by Columbia University Press.

My list of untranslated books is shrinking because many of the books I thought deserve translation have been picked up. But there are still plenty of good ones waiting. I enjoyed Aleskandr Grigorenko’s Mebet, which is set in the taiga and focuses on a very unrelenting person; I bought another of Grigorenko’s novels in Moscow last month and am looking forward to it. I also love Dmitry Danilov’s Description of a City: Danilov describes twelve monthly trips to an unnamed city in spare, almost generic language, creating a feel of detached intimacy. I’m very picky about what I recommend for translation but hope to find some new candidates in the towering stack of books I brought home from Moscow last month.

Read an essay by Hayden about the process of translating Laurus over at Lit Hub.