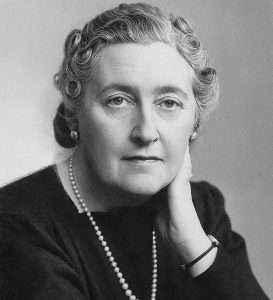 I’ve read more books by Agatha Christie than by any other author, and am happy to read each multiple times. These are endlessly devourable. Christie should be lauded not just for the intricacy of her plotting, but for her wit, her characterizations, and her ability to distill truths about human nature into a single sharp sentence.

But there’s also a lot about Christie for the contemporary reader to dislike. The books are at various points nakedly anti-semitic, racist, sexist, and homophobic–even if it was uncommon to use these terms at the time she was writing. “At the time,” of course, is one way that scholars and readers have sought to excuse the sins of great authors. As products of their time, the thinking goes, certain unsavory tendencies can be viewed more benignly.

This argument only works up to a point. Social progress happens because groups and individuals take a stand against prevailing prejudices. And it seems fairer to an author’s legacy to acknowledge what makes her works distasteful, along with what makes them great. Attempting to sweep something under the carpet is a superficial way of disengaging from what may be an important aspect of that body of work.

In Christie’s case, a major aspect is classism. It’s common to read Christie for its ability to serve as an escape. For one thing there are the pleasures of Christie’s settings―those tranquil villages, exciting archeological sites, and luxurious trains. Her books are a leisured-class fantasy, replete with abundant servants, stately homes, and harmonious (though vastly unequal) social relations. This fantasy world rests, in large part, on her main characters not needing to struggle for money…although this doesn’t mean that her characters don’t think about money. In fact these well-off people often don’t consider themselves well-off, or are plotting to make themselves better-off. This is a major plot point in many Christie works, such as those where young people greedily anticipate an aged relative’s inheritance, and thus have a motive for speeding along the death of said relative. (It would be interesting to try to transpose one of these plots to a more heavily socialist society where inheritance is taxed at a higher rate, and there’s more social redistribution of wealth.) After all, my favorite Christie book is the one that taught me the word tontine, in the context of suspicious deaths within a family.

Much of Christie’s work seeks to bolster the rigid class system. For one thing, there’s the treatment of the working class. Servants and service employees are almost invariably vapid, as if suggesting that their natural place in the social order is a lesser one. There’s the “somewhat bone-headed page-boy addicted to cheap crime stories” of One, Two, Buckle My Shoe or the “half-witted but amiable” domestic servant of The Moving Finger. In The Mirror Crack’d from Side to Side, one character sums up a group of maids: “Rather simple, some of them had been, and frequently adenoidal, and Amy distinctly moronic.”

To be fair, part of this is general demographic stereotyping. In Christie’s works, military men are always boring blowhards, doctors are always genial and twinkling, ministers are always overly earnest, lawyers are always brittle and cautious, and secretaries are always intimidatingly competent. And servants are always dumb but harmless. Christie gets some humor out of these stereotypes, but does little to transcend them.

George (the valet of Christie’s most famous character, Belgian detective Hercule Poirot) might seem to be an exception. But he’s a stereotype of a deferential, passive, unemotional, quietly competent English butler. He isn’t actually helpful; Christie finds comedy in the mismatch between his domestic preoccupations and the intellectual work of Poirot. And George, like the other servants in the Christie universe, doesn’t exist outside of his relationship to a wealthier character.

The main characters in Christie stories primarily engage with servants in one of two ways: either remaining cheerfully oblivious to them, or complaining about them. Indeed, The Servant Problem looms large for the leisured ladies who consider themselves poor if they have only one or a few domestic employees. As one such lady comments in A Murder Is Announced, “ ‘Mother always felt it was terribly poverty-stricken not to be able to afford a kitchen-maid.’ ”

Sure, some of these descriptions involve Christie commenting on the class problem, and not necessarily endorsing it. It’s incisive when Christie points out the excessively nuanced class distinctions her British characters seem to be born knowing. Servants themselves are sometimes the most class-conscious. And it’s funny when a barrister says, in Five Little Pigs, “ ‘Wretched people, governesses, one never does remember them.’ ” Another humorous description, from Crooked House, is one character’s reference to “ ‘Just a servant problem. Why haven’t you got any servants down here and upstairs something in an apron and a cap opened the door to us?’ ”

But the books abound with such glib comments, which have the overall effect of dehumanizing the unprivileged. It’s telling that the murder suspects and victims are almost never working class, and both murder and tragic victimhood are presented as being reserved for more privileged people. One characteristic passage comes from Murder Is Easy: “It was not a case of the butcher, the baker, the candlestick maker. It was not a case of a mere garage mechanic. The person in question was one against whom an accusation of murder was fantastic and moreover, a serious matter.” In Peril at End House, Poirot reflects of a servant that the “general mentality of crime seems above her level.” That servants are too brainless to even be capable of murder is, in the Christieverse, the ultimate insult.

If a servant does die, this death doesn’t count. It’s always incidental to the murder of a more important person. Mr. Pye, a kind of connoisseur of criminology, sniffs in The Moving Finger: “ ‘Not the most interesting of crimes, I fear. Somewhat sordid. The brutal murder of a little serving maid. No finer points about the crime.’”

Christie seems to agree with these kinds of attitudes–particularly in A Murder Is Announced, with its extreme wistfulness for a bygone era when the strict class system was still intact, and murder was mostly genteel. “Genteel murder” is an apt description for Christie’s work in general. On one hand, the atmosphere of this gentility is one of the many elements that make Christie’s plots a pleasure to read. But on the other hand, her constant effacement or denigration of the working class is one of the many elements that make her work troubling. Different readers will navigate the balance between the two in different ways, and some may decide that her class politics make it too hard to enjoy her books. I, instead, flinch every so often while reading a Christie, but ultimately come back for more of her tightly constructed plots and clever psychological observations.