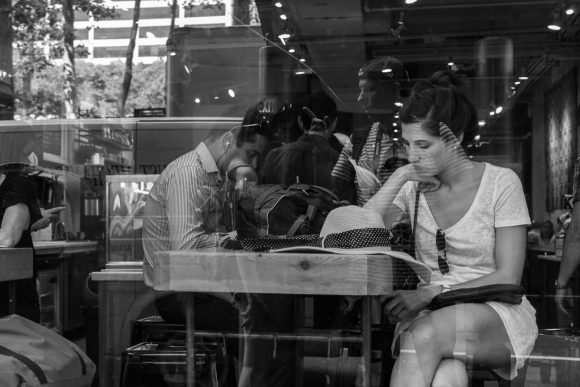 Popular opinion says that during the holiday season, people either fall in love or reflect on their past year of life. Sometimes they do both, but it’s hard to manage these conflicting actions at the same time. One is active, expressive, and outward moving. The other is passive, observational, and focused inward. Lydia Davis’s first and only novel, The End of the Story, concerns a solo narrator’s effortful recounting of a disappointed love. The book touches on the contradictory and indefinite nature of memory, especially one fraught with heartbreak. Davis’s book is extraordinary because it manages to make the act of reflection more active and alive than that of romance.

Much of the novel concerns the narrator’s worries over the best ways to tell her story: chronologically or in random order, including the minutiae of the relationship or zooming out for only big picture stuff, and fashioning the woman in the romance more or less like her actual self. Along the way, this narrator repeats things, contradicts herself, and is never very specific about the details of things. For example, she never names her ex-lover or the San Francisco-like town in which many of the novel’s events occur. Reading the book gives you a sense of displacement, of floating around in the material, the way both memory and love often make you feel. The narrator’s story is a series of patched together memories of time spent with an erratic, much younger man. It’s never clear when exactly the events happened or whether or not they actually happened.

True to form, Davis keeps her imagery spare—similes and metaphors to a minimum—communicating a strong sense of the narrator’s strong sense of trying to stick to the facts. What’s so remarkable about this slim novel is how many facets there are to the narrator and her attempt at novel writing. At times, she seems teenaged and pathetic, leaving you unsurprised she is alone at the end of it all. At others she appears strong and capable, though she still waffles back and froth on certain things, like narrative voice: “…I had used she for I so long that even the third person was too close to me and I needed another person, even father away than the third person. But there was no other person.”

What’s also striking is that this book—which, as the title suggests, looks back on a relationship—deftly explores the uncovering of someone with whom you become romantically involved soon after meeting them. It’s moments like these that Davis’s tidy prose is exquisite. Early in the novel, the night the narrator first meets the young man she’ll come to love, she writes: “I knew almost nothing about him, so each thing he did and said showed me an entirely new aspect of him, as though he were unfolding in front of me.” This same unfolding image reappears later in the form of an unnamed Faulkner novel the young man leaves at the narrator’s house. The yellowed volume is “not really a bound book any longer but two piles, one of bound pages and one of loose pages, the book did not close on the story.”

Throughout the book, the narrator struggles to complete the novel she is writing about her past lover. She wants to finish it but is incapable of finding the right ending. Along the way, dissatisfied with her tone, she often changes it abruptly. After the young man leaves her for another woman, she writes about still having feelings for him: “I still held him in a little corner of my heart. Now the idea of my heart having a corner bothers me.” It’s as though writing things down is therapeutic but re-reading them is bothersome. Here again is the dichotomy of action and reflection.

In love, everything is alive and full of beauty. Now, out of love, the narrator wants to see everything as drab, cloudy, and indistinct. “I wanted the flowers to wilt just a little . . . and the smell to go out of the ocean, too. I wanted the waves to become feeble, the sound of them to be muffled.”

At novel’s end, things are still colorless. Exhausted from her effort to find where the young man lives, the narrator stumbles into a bookstore, where a kind stranger brings her a cup of tea, “cheap and bitter, with a paper tab hanging over the side of the mug.” What’s different here is that she’s telling the truth about the tea—not the way she remembers it or the way she wants to remember it. The ceremony of tea, as holiday rituals ease us into reflection, lifts her out of it, and she allows the story she’s writing to finally end.

Tags:" Lydia Davis, Narrative Voice, The End of the Story