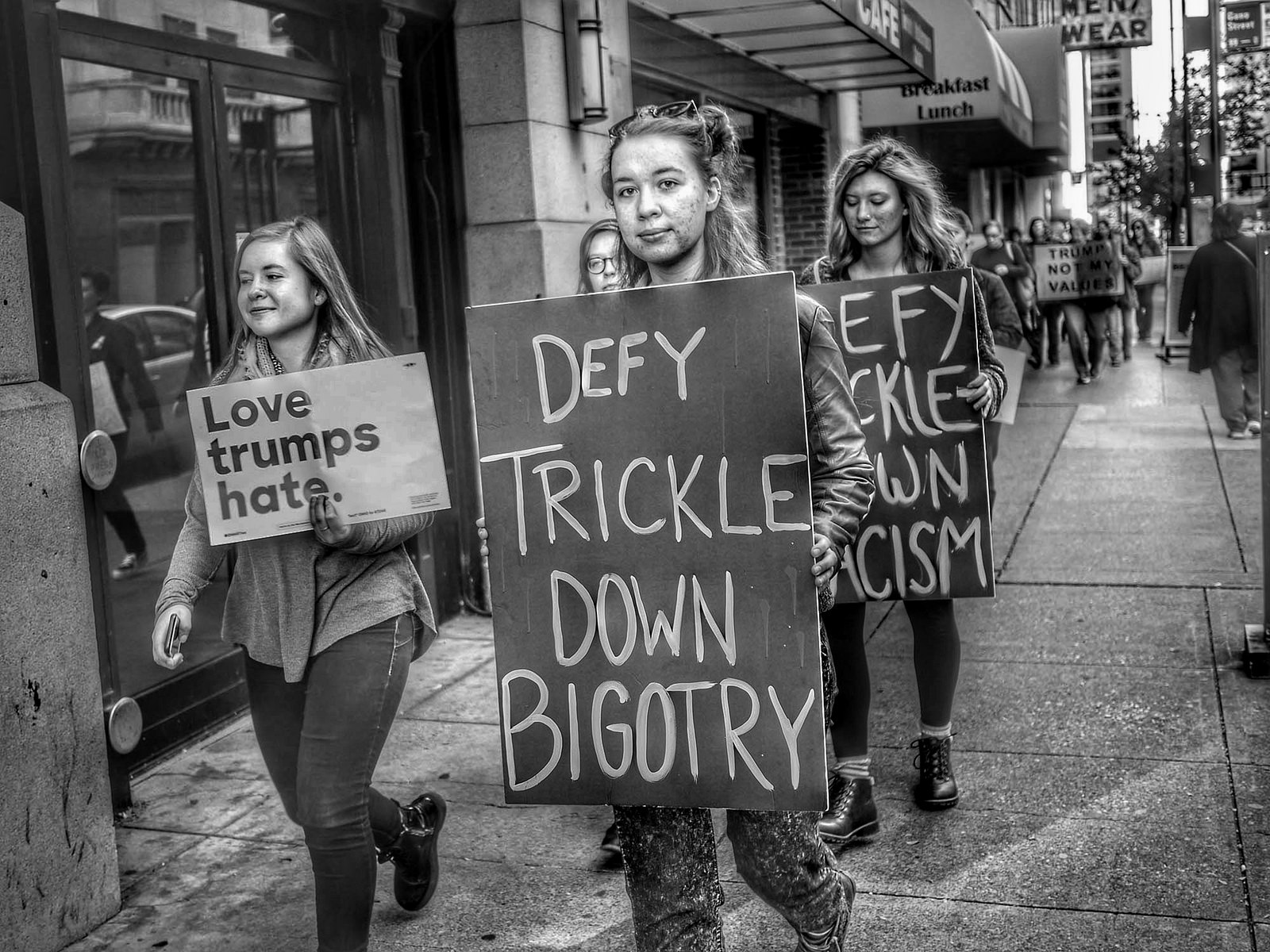 My creative writing students want to talk about the business of literature. They want to talk cover letters, agents, MFA programs, fellowships. Eventually that conversation circles back on itself and my students want to talk about New York like its another planet. They ask what’s the best publisher (in my opinion). They ask what’s the worst publisher. They ask if I’ve read the news on Milo and Simon & Schuster yet—the canceled book deal, the ethics of publishing. They ask, Is that a good one? And suddenly I realize that I don’t know how to rationalize to my students why they should send their best work to a publisher that’s so eager to cash in on this post-truth wave of American bigotry, this same brand of bigotry that’s hell-bent on destroying or deporting or degrading people like them and me—people of color, writers of color, women, immigrants.

I wonder about the role of writers of color in this new post-truth era: Do the systems and rules about the business of writing—the same ones we’ve learned from the MFA—still apply to writers of color as we are forced to choose (beyond decisions of craft) whether to be complicit or not in our own oppression? Is there a new ethics to where we place our work? Do we still go with New York (read: Big Five) at all costs?

We’d be remiss if we didn’t take a harder look at the publishing industry in the context of this American bigotry, which is proving every day to be more and more profitable and obviously tempting to the profit-driven New York apparatus. To that end, we should be conscious of the way that apparatus is profiting from our brands, our names, our cultures, and our communities.

I’m reminded of Roxane Gay’s recent decision to pull her much anticipated book, How to Be Heard, from Simon & Schuster’s list in the wake of the book deal between that publisher and Milo Yiannopoulos—a brave decision both financially and personally, given the advance of her book deal and the consequences of what other dissenters of Milo’s deal–most notably Adam Morgan, editor of the Chicago Review of Books, who refused to review S&S tiles for the coming year–had faced from the alt-right. In the wake of that decision, Morgan had a public smear campaign—facilitated by Breitbart News—inflicted upon him in addition to death threats, which were sent to him and editors working alongside him. Many established writers, of their own accord, also came out of the woodwork to admonish Morgan for his decision not to review books published by Simon & Schuster, even going so far as to say it violated the first amendment right to free speech.

It wasn’t until last week that Yiannopoulos’ contract was shredded–but as Roxane Gay has written, “In canceling Milo’s book contract, Simon & Schuster made a business decision the same way they made a business decision when they decided to publish that man in the first place. When his comments about pedophilia/pederasty came to light, Simon & Schuster realized it would cost them more money to do business with Milo than he could earn for them.” As Gay goes on to say, Simon & Schuster were perfectly fine with publishing his racist, sexist, transphobic, anti-Semitic, Islamophobic, xenophobic thoughts until it hit a point that reached beyond the beyonds. Which is to say until it became unprofitable. Before Gay pulled it, Simon & Schuster had scheduled the release of her book on the same day as Milo Yiannopoulos’.

As I’m standing in front of my class and trying to rationale, Why send to New York? the obvious answers, the MFA ones, come to mind: the cash advance, the marketing, the prestige, the brand building, which is to say nothing of the actual writing or the audience of the book itself. And as we discuss it and my students say “cash advance,” I’m thinking Bookscan; “marketing” and I’m thinking twitter following, shrinking budget; “prestige” and I’m thinking they published Milo; “brand” and I’m thinking tokenism. Which leads me down another train of thought, something the great Miguel Pichardo said to me at AWP earlier this month: we have to remind ourselves that when we publish, when we “make it,” we aren’t necessarily exceptional, but representational. In other words, Tokenism is not the canon.

In stark contrast, non-profit indie publishing seems to still have a soul. Writers of color should take note not only of the work these presses are doing for literature at-large, but what they’re doing for our communities as well. Not only are they taking those financial risks in publishing a more diverse set of voices, they’re winning major literary prizes while they’re at it. Daniel Borzutsky’s The Performance of Becoming Human (Brooklyn Arts Press) which won the National Book Award in Poetry for 2016 quickly comes to mind. As does Domingo Martinez’ National Book Award finalist memoir, The Boy Kings of Texas (Lyons Press). Claudia Rankine’s poetry collection Citizen, which was also a National Book Awards finalist, does too.

Are there new ethics for writers of color publishing today? Absolutely, I’d say.

I think writers of color—and especially Latinx writers–have an obligation to send their best work (at least once in their career) to indie presses that are lifting up voices like theirs. Presses, too, that are of, by, and for our communities. This is how we dismantle tokenism and complicate the canon of our literatures in the US. And in the age of e-books and online distribution, there’s no reason to fear that your book won’t make it to market anymore.

I have to remind myself sometimes, and my students too, that for most of literature’s history, publishing was indie. That literature survived and in many cases thrived. New York is one model, and a powerful one at that. But writers of color—and editors, and book reviewers, and teachers—have to be willing to hold its feet to the fire should it suddenly find itself tempted by the profits of oppression made easy in the twenty-first century.