Okay writers. My last Round-Down was about the impact of self esteem on our creativity. Several readers asked for a followup about how to cultivate said esteem, and for a half-second I was so on it. But I can’t deny that the news around the world has been horrifying the last few weeks, and that trying to believe in one’s writerly value in the midst of it may feel like a fool’s errand.

So my first idea was to remind everyone that art and literature matter precisely in tumultuous moments! That creative works speak truth to power! That they convict and persuade! increase empathy and human connection! relieve and heal! But we know this. It’s probably why we became writers.

So. The more relevant reminder? Maintaining a sense of self-value–apart from what we create–is part of the WORK of being an artist. If it feels difficult as hell, you’re likely on the right track. 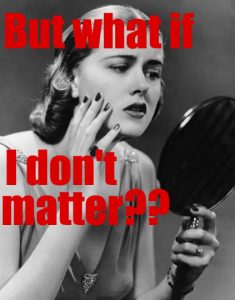 The fear that our writing won’t “matter” (whatever that means) will always lead either to complete inactivity, or to a delusional inflation of the value of our work. It can also lead to Total Identity Meltdown: We don’t just question whether our work matters, but whether we can possibly matter if we’re not writing earth shattering material.

You guys, this is messed up. So for the love, I think it’d do us some good to revisit some hard truths about writing and creativity.

1. Not all writing is equal. So . . . no: your 50 Shades fan fiction probably won’t have the same sociopolitical impact as Uncle Tom’s Cabin. It may even be demonstrably inferior to most existing fiction. But here’s the thing: that doesn’t mean you shouldn’t write it.

Your work doesn’t have to be earth shattering to be worth getting down. If you believe you’re required to produce something that reaches the outer galaxies of Meaning, you’ll either wind up inflating the significance of what you write (delusion), or you’ll never write anything at all (inactivity)–because you won’t think it matters enough.

2. It’s okay if writing is hard. Writing–along with other creative pursuits–is generally stereotyped as either requiring mental illness (especially depression), or not being work at all: à la “Find a job you love and you’ll never work a day in your life.” Sorry: neither is accurate.

Writing is work. As such, it’s allowed to be hard. As songwriter Leonard Cohen once asked, “Why shouldn’t my work be hard?”

So. Maybe it’s a complete circus just to get yourself to sit down and write. Or maybe you have to write a paragraph over and over, and you keep two pages for every thirty you write. Great. There’s nothing wrong with you.

Stop waiting for writing to come easily, for it to feel good, or for you to wake up every day in Ecstatic Anticipation of Typing. Writing isn’t hard because you suck. It’s hard because it’s hard. So expect to work. Expect to need discipline, willpower, patience, practice, and accountability. You will.

3. Being self aware can be hard, too. Writing is difficult in part because it requires confrontations with one’s moral stamina, self-criticisms, repeated failures, unpredictable life circumstances, and personal values. Accept that as a creator, you’ll often be examining the dark and empty corners of your person. Take care of yourself, so you’ll have the mental and emotional strength to handle it. Find groups and activities that effectively support both your work and your self. Don’t wait for it to stop feeling like effort.

4. Along these lines, you’ll have to do the hard work of establishing a sense of value for yourself–apart from what you create. In an interview with 99U last week, Maria Popova (the brains behind Brain Pickings) said that young people ask her all the time how they can start a successful enterprise. But they’re often measuring “success” by hits and followers: “How do you build up to seven million readers a month,” they ask her, “or two million Facebook fans?” In reply, Popova argues that “the work is not how to get that size of an audience or those numbers.

That’s just the byproduct . . . The real work is how not to hang your self-worth, your sense of success and merits, the fullness of your heart, and the stability of your soul on those numbers—on that constant positive reinforcement and external validation.

In other words, while it’s natural to base your value on your art, it’s also irresponsibly precarious. We have to do better than this by ourselves and by our work, or we’ll suffer–right along with our writing.

So spend a few minutes considering what you believe gives a human being value. (You might consider what could apply to every person, regardless of appearance, age, background, health, ability, productivity.) Find something you can wholeheartedly buy into. Then apply it to yourself.

Next, spend a few minutes defining success for yourself. In our culture, the default definition is some vague idea of professional or financial “achievement,” as recognized (and ideally envied) by others. This default sucks. It places us at the mercy of all kinds of circumstance, and it makes gods of numbers and jealousies while disregarding our native opinions and creative interests. Don’t settle for it.

Be aware that you’ll have to constantly steer your mind back from the stupid, catch-all cultural-success default. This is its own hard work. But it will keep you from asking your art to bear the weight of your very existence. And bonus! It will keep you writing.

Most importantly, make sure you separate its mattering from your own. Do the hard, intentional work of recreating this slippery separation again and again and again. Then write some more.