A couple weeks ago, author and marketer Ryan Holiday wrote a piece for Thought Catalog titled, “Can You Call Yourself a Writer?” In it, he argues that “[j]ust because you have done something, doesn’t mean you are something.” In other words, calling yourself a writer when the craft is a mere hobby that hasn’t (yet) earned you a keep or an audience is unwarranted, presumptuous, and likely to keep you from actually doing the work to “earn” the title.

is writing something you are, or something you do? Or does it require the accumulation of enough doing over time to justify your eventual claim to being? We’re not going to clear this up today. But thankfully, what Holiday and Blume seem to agree on is that writers write. That is, a hoard of ideas or stories means little until it’s shareable; until an audience, however small, is capable of encountering it.

Not surprisingly, this is the hardest thing about writing: getting ideas onto the page, going from Notion to a Physically-Written Articulation. And there’s also no shortage of advice about what’s behind this Writerly Procrastination: lack of discipline, not enough freedom to fail, wrong kind of workspace, not enough prep writing, no identified audience, the inner critic’s too loud, [enter here the most recent article you saw about how to get yourself to sit down and f-ing write].

But last week, while conducting a writing program for incarcerated girls, I was reminded of another, seldom-discussed aspect of getting words on the page: that a certain amount of self-esteem is necessary to create anything at all—to even begin it. The initial, decisive moment of action—the thing we so often can’t get around to—is made possible by the belief that one’s own self can in some way contribute to a worthwhile idea, result, expression. And it’s THIS precarious, absurd-ish belief, this creator’s version of self-esteem, that generates physical movement: fingers on a keyboard, scrawled lines across paper.

So here’s the deal: if we writers are regularly running into Creative Inaction, we could do worse than an occasional self-esteem check. After all, people with higher self esteem create more things, because they’re more apt to take risks and to value both the process and the result. And creating gives back: it generates a sense of accomplishment that nurtures self-esteem. As actress and playwright Anna Deavere Smith writes,

Self-esteem for creative people is important inasmuch as it is a part of what helps you organize yourself and others around an idea, so that it can come to fruition. Ideas are a dime a dozen; to make them real takes consistent, persistent application of energy toward that idea. Self-esteem is a foundation.

So it’s not that self esteem is essential for creativity as a trait; it’s essential for creative action. I mean, writers could talk (or tweet) all day about the things they’d like to write. But actually doing the work to bring it into the physical, readable world—that’s when paralysis happens.

So if it’s been a while since you’ve considered your self-regard and its impact on your productivity, give it a shot:

1. You can’t think of anything to write. This could be caused by lots of things, but one may be the glut of nagging questions in the back of your mind, like who am I to have ideas, who’s going to care, what difference would it make, when would I ever actually DO something with this writing, someone else could do it better, what if I have to promote or publish it, no one’s going to give it the time of day, it won’t matter because it can’t matter, I have nothing worth saying to the world. This is Writer’s Block via Devalued Self.

2. You can’t seem to get near any sustained self-observation. Some of the best ideas for writing come from honest confrontations with the self . . . and writing itself often requires us to check in with our own gut responses to the world around us. Unfortunately, there are times when we avoid looking in the “mirror” of our writing, afraid we won’t like what we see. Easier to cut it off at the pass and avoid the craft altogether.

But ironically, writing as an active process can actually help us deal with feelings of shame or powerlessness. Nobel-winning poet Czeslaw Milosz wrote, “From early on writing for me has been a way to overcome my real or imagined worthlessness.” If you’ve been avoiding writing in order to avoid yourself, see if you can find a few introspective prompts, and get something down: even if it’s writing about not wanting to write about feeling too worthless to write. It’s a start.

3. You get intense, vaguely nervous pleasure from snarky listicles like this one. Or excoriating critiques of confessional writing, or sweeping criticisms of like, an entire generation’s writing. Or from writing your own versions of these, or voicing them at gatherings wherever.

These feed our tendency to see writing as a product to rate, and writers as figures who merely satisfy or disappoint our desire for readerly pleasure. They also point to a mentality of scarcity: limited time and patience, limited readership, limited opportunities to define for the world what “real” writing is.

More worringly, they feed our tendency as writers to see our work as a target for criticism, gossip, and/or hilarious jabs. This makes writing ridiculously more difficult than it already is. Whose critique are you avoiding by not writing? 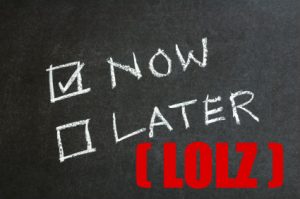 4. You’re easily distracted. Maybe you’ve been taking every Facebook quiz ever, or you’ve gotten up to make a third sandwich, or you just woke up from The Great Buzzfeed Binge of 2014. If that’s the case, you might only need the usual advice: more discipline, zero wifi, a more focused work environment, and/or more structured goals. But it wouldn’t hurt to dig deeper, too: What are you avoiding via your distractibility? Is it failure? (In that case, how disastrous would failure be? Is your sense of value hinging on good writing? And if so, is that hinge okay with you?) And what drives your desire to write at all? Anne Deavere Smith again:

5. You’re not helping other human beings. “Serving” in some intentional, active way—via your writing or by getting involved with local social justice events or services—affirms to your own mind that you’re more than a vacuum seeking success, love, money, and readership: you’re capable of giving, too. If you feel a gnawing abyss of need or impotence, you’ll feel incapable or unworthy of helping others. You’ll also avoid writing, because the latter—at its best—is human, generous, and interactive.

How has self esteem affected your craft?
What do you do to nurture a belief in the value of your own writing?
Any advice for writers struggling with self esteem?