Home
»
Critical Essays
»
The Problem with the Quest Narrative 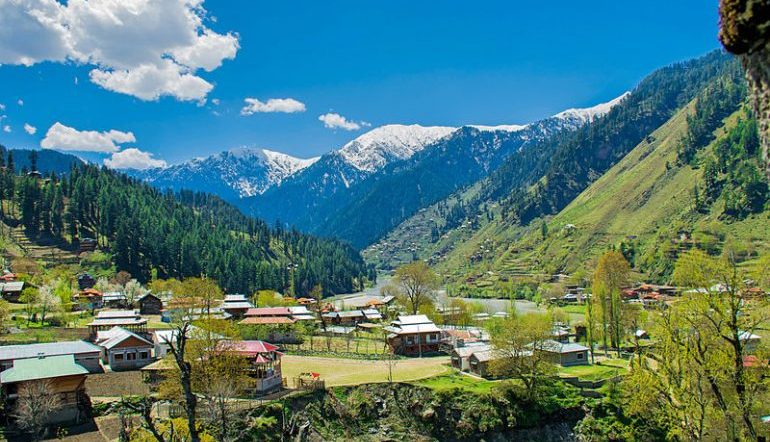 Shalini, the main character of Madhuri Vijay’s The Far Field, has recently lost her mother to suicide. In her grief, she remembers a man who used to once visit her and her mother and, without telling her father the reason for her departure, decides to set out on a classic quest: she leaves Bangalore for rural Kashmir, where she believes him to be, placing herself on a well-worn path. Grieving characters frequently seek closure this way—utilizing unfamiliar environments to spark revelation and finality.

Another story we’ve heard before: a person with privilege enters the world of the “other,” the world of daily struggle, winning over the hearts of the locals and leaving a changed person. Such narratives typically avoid difficult questions relating to privilege and pain. But Vijay doesn’t back down from these questions. Instead, she uses the problematic traditional quest story to reveal how the intrusion of blind privilege can do real and lasting harm.

From the beginning, Shalini sets out on her quest expecting to be liked. She is careless and knows little about the actual lives of the people she wants to accept her. Take, for example, Zoya, a silent, wary woman Shalini meets upon her arrival in contemporary Kashmir, a contested space rocked by conflict and prejudice. After she shares a cigarette with a local soldier, she learns that, in her ignorance, she had been allying herself with a villain—Zoya, she learns, is struggling to find her son Ishfaaq, who “disappeared,” or was taken by the soldiers. A friend of Zoya’s tells Shalini that Zoya doesn’t tell people her story or trust them because they leave and don’t come back; shortly after, Shalini leaves, and she does not return. Through such moments, Vijay shows us early on that Shalini is interested only in superficial interaction with this world.

Eventually, Shalini is able to make contact with the family of Bashir Ahmed, the man she is seeking, and goes to stay with them, hoping to find closure by tracking him down—to capture something of what she lost when her mother died. They tell her that Bashir is gone, but soon she finds out that he is alive and in hiding in a secret room in the house, where he’s been ever since being embroiled in local violence a couple years back. Shalini stays, hoping to speak to him, and in the meantime dives into Kashmiri life with a strange, distanced excitement, determined to make people like and trust her. She plays with the idea of becoming an English teacher at the local school, claiming aloud to Bashir’s wife, “‘I love this place.’” She goes on to think, however, “I loved this old woman by the fire, whom I could not understand and who could not understand me.” That they don’t understand each other seems, for Shalini, to be part of the appeal. The trauma enveloping Kashmir is separate from her own and takes her away from her pain. Explaining her decision to stay in Kashmir, she says: “I had chosen this place, these people, this life, with its secrets and its violence, its hardness and its beauty, and even though I was not yet worthy, even though I would never fully belong, I would not leave.” Shalini is proud of herself for loving Kashmir and for wanting to stay, finding a touristic satisfaction in what she sees as the rural, simple life.

Shalini’s lack of understanding for so much of what the people around her are going through is precisely why she doesn’t actually belong. She repeatedly asks to see Bashir even though his family refuses—as they try to avoid real violence from soldiers or from civilians by hiding him, she continues in her ignorance to make requests of them in order to satisfy her own desire to talk to him about her mother. Her first instinct, in fact, despite the family’s insistence to the opposite, is to innocently insist that Bashir shouldn’t hide, that he should emerge and live openly with his family. Showing both an ignorance of local politics despite the evidence she’s seen and also a stubbornness in her choice not to understand what’s going on around her, Shalini tries to get Bashir to leave his hiding place, which would put everyone in danger.

Finally, she is able to speak to Bashir—his daughter-in-law agrees to let her in. She asks him why her mother didn’t run away with him instead of remaining, miserable, in Bangalore, where she would eventually die by suicide. But he says she couldn’t have come with him to Kashmir. “‘I tried to tell her it wasn’t possible, ’” he says, “‘but she wouldn’t listen.’” Just as Bashir knew her mother couldn’t go to Kashmir, the people around her know that Shalini can’t stay, despite her own illusions.

When she tells Riyaz, Bashir’s son, that she would like to stay in Kashmir, he is skeptical and frustrated with her belief that she could live there. He senses the voyeuristic tone of Shalini’s trip, knowing that she had been living a privileged life in Banglore. As a test, he shoots a crow and has her hold it when he leaves. She is reluctant to even touch the bird but agrees once she realizes that the action symbolizes her ability to stay in Kashmir. “I shook the bird, as if to make my point to my invisible, silent audience, and it shifted slightly,” she says. “And that was when I saw what I hadn’t noticed before: the bullet wound just beneath the right wing.” Throughout her time in Kashmir, she sees things in precisely that order. First, in selfish terms—of what something means to her; then, with a quiet pride as she accomplishes what is actually quite a simple task. Only later does she registers the darkness beneath what is happening around her. Her “invisible, silent audience,” the reader, watches as she repeatedly fails to understand the pain of the people around her.

Riyaz, on the other hand, wants to leave Kashmir. He wants Shalini to take him to Bangalore, where he could earn a living. Shalini thinks to herself that really, they are yearning for the same thing, an escape. But her version of escape is a childish, selfish attempt to find peace in a world she can’t comprehend; Riyaz’s wish is to flee a world where violence is constant and the pressure on him to protect his family is high. The day that Shalini decides to stay in Kashmir, she agrees to help Riyaz make his way to Bangalore, pushing money into his hands. But halfway to the car that will take him down the mountain, a group of soldiers hears them in the woods. They brutally beat Riyaz while Shalini hides in the bushes; she excuses her inability to move, to enter the scene, by thinking about how Riyaz told her to stay. It is the reader who judges her, watching her hide from a situation that she put them in.

The next day, a group of soldiers comes to pick her up. Her father, worried when she wasn’t answering her cell phone, has asked the local brigadier, an old friend of his, to find her. Her privilege rushes to the surface: this journey was always temporary, and even if she left her phone behind, her safety net has always been waiting for her to come home. And so the same group of soldiers that beat Riyaz comes to stand politely in front of her. As they stand there, she finds herself unable to connect “the pimpled soldier” to the “cowardly, cackling bully” of the previous night. She struggles to see the danger of the soldiers even then, despite having seen proof of their violence. She still finds herself unconvinced of a truth that the villagers experience on a daily basis.

“I think, Murgi,” Riyaz’s wife, Amina, says, “that it’s time for you to go home.” Shalini has done what she came to do and left irreparable damage in her wake: Riyaz almost left his family for Bangalore with her help and now has been beaten badly, and soldiers have come to their home and put them, Bashir included, at risk.

Both of Shalini’s audiences—the people she’s met and the reader—know that she isn’t supposed to stay. Her integration into the community was always superficial, despite her conviction that she was somehow now part of it. When she gets to the brigadier’s house, she looks in the mirror for the first time since she arrived in Kashmir: “I felt a brief shock of recognition, followed by an obscure disappointment. I was thinner, yes, my hair a bit longer, but other than that, I had not changed at all. But, then, what had I expected?” What indeed?

As she prepares to journey home, she sinks into old comforts immediately. She wants to distrust the brigadier but cannot—“he had been so tactful and gracious, nothing like the others.” She spends the night at his hospitality in a soft bed and the next day tours the barracks with her new host, the soldiers now deferring to her. “Merely walking beside him conferred a similar power on my person; most soldiers did not even dare to look at me.” She fails to wonder whether the soldiers are being so polite because she is with the brigadier now, rather than the Kashmiri, making clear to the reader that her danger was voluntary, temporary, voyeuristic, and she’s now left it behind.

While her privilege washes back over her, so does her faith in authority. Thinking of Riyaz, she concludes that the soldiers were a problem but the brigadier, with his polite manners, will understand. She tells the brigadier that she saw a group of soldiers beat up a friend and that they also had a young boy captive. She asks the brigadier to do something about this. When he asks for her friend’s name, she doesn’t hesitate to tell him. Then, Shalini heads back to Bangalore, trusting that the problem will be fixed, her privilege still a barrier between her and Kashmir.

At the end of the novel, Shalini calls Bashir’s family and learns that Riyaz has been taken away by soldiers at the orders of the brigadier. Shocked, she asks what they can do; the person on the line gets angry: “How can it be that you still don’t understand? Even after everything Zoya showed you, after you found out about Ishfaaq, how can you still be surprised?” The reader asks the same questions, but Shalini remains ignorant.

Near the end of The Far Field, Shalini writes to her readers directly: “I am aware that I am taking no risks by recounting any of this, that, for people like me, safe and protected, even the greatest risk is, ultimately, an indulgence.” But she wants people to know what happened in Kashmir. The reader, however, wonders if she wants people to know only for herself—for wouldn’t telling the whole story only put the people she met even more at risk? “I am aware, too,” she writes, “of the thousand ways I have tried to excuse myself in the telling of it.” With that, Vijay reminds us that even with what we already know and can use to condemn Shalini, there is more beneath her unreliable account that we haven’t even seen.

By the time the novel ends, Shalini is doing quite well. As much as she claims to be tortured by remembering past events of her voyeuristic trip to Kashmir, life in Bangalore has gone on for her, quite easily. “I have thought about them all,” she says. “I have not tried to do more.” That, ultimately, is precisely Shalini’s crime: she went to Kashmir, she met people, and then she left and did nothing more. In this conclusion, the reader understands what Vijay has done and how she has been able to trouble the quest narrative.