Home
»
Reading
»
The Psychopathic Gaze: Murder, Violence, and Misogyny in Natsuo Kirino’s Out 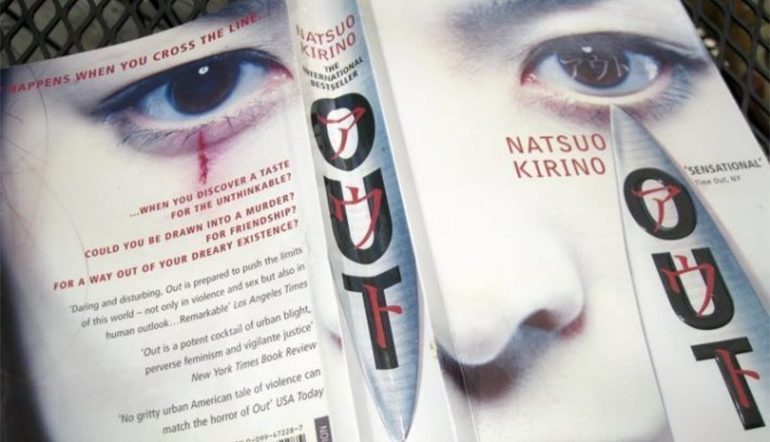 In Natsuo Kirino’s feminist thriller, Out, Yayoi strangles Kenji (her abusive and profligate husband) to death after he gambles away their savings, a crime that accelerates her criminal professionalization. Afterwards, she and three of her bento factory co-workers (Masako, Kuniko, and Yoshie) cut up Kenji’s body into tiny pieces before disseminating them throughout Tokyo, a literal deconstruction of the patriarchal body politic that is both gruesome and implicitly nationalistic (as if his death were the natural consequence of both infidelity and xenophilia for spending his money on a Chinese prostitute). Suddenly, Yayoi is free of her oppressive and derelict husband and their estranged and dysfunctional marriage, which naturally makes her feel empowered by her newly acquired freedom. This freedom, however, become illusory and short-lived. According to the rules in Out, murder becomes its own infinite regress.

When Yayoi dismembers Kenji’s body, this dismemberment serves a secondary function for the four women, namely, to train them for their new moonlighting gig hacking off the body parts of Yakuza victims (which becomes moral shorthand for characters readers are not supposed to care about). Ironically, the novel argues implicitly that the literal deconstruction of, and the violence towards, patriarchy inevitably makes the four women complicit, even as an act of self-defense or as tool in the erasure of their own guilt. At the same time, violence has no perfect moral equivalency here. There is a long and winding moral continuum in Out, which makes some violence appear more justified than others, especially when it involves killing male sociopaths, cheating spouses, and morally questionable victims of Japanese organized crime. The lack of redeemably complex male characters in Out is teeth-grinding, for sure, but is also directly related to the simplistic construction of Japanese masculinity in general in this novel and is largely a by-product of the narrative focus, which make all peripheral characters blurry and undeveloped save for the four main female characters. The distorted lens of this storytelling does create a simplistic moral universe at times in which male characters are all uniformly simplistic and heinous (just in different ways) and almost all female characters are complex and less heinous by virtue of the indisputable oppression they have faced in their daily lives. That’s hard to argue with, but simplistic characters—even as a consequence of narrative focus—are still simplistic characters, ultimately, and their defects can’t be erased by invested characterization elsewhere.

In Out, each female character embodies one or a series of cultural clichés in Japanese society: There is the overworked employee, the alienated urbanite, the emotionally vapid, but materialistic brand name consumer, the neglected housewife, the sexual victim of patriarchy, the exploited, working-class factory worker, and the family slave. At the same time, the four co-workers also collectively defy female stereotypes through organized and gory violence. By chopping up men’s bodies (many of them, morally questionable themselves), the four women assume a secret alternative identity that literally erases—through anatomical atomization—but also continues the cycle of patriarchal violence. Despite rampant and systematic misogyny both within traditional Japanese culture and within the Japanese labor market, Kirino Natsuo’s novel rips a massive hole in the Japanese cultural imagination by constructing female characters who are simply smarter, stronger, more deadly, more cooperative, and more organized than the flat, dumb, and violent male characters, which both problematizes the textual definition of female strength (to the extent that it relies almost exclusively upon personal and collective violence against male bodies—not to mention fantastic teamwork), but also emancipates this definition by reifying female complexity, interiority, and subjectivity in a way that challenges and defies the genre itself (though at the cost of ignoring male subjectivity).

Part of the psychological utility of the trope of cultural compartmentalization in Out is the way in which it allows characters to go back and forth between competing cultural, professional, domestic, social, and emotional spheres, and psychic partitions with amazing dexterity. The most potent signifier of cultural compartmentalization in Out is the mirror. When Yayoi stares at herself naked in the mirror, it becomes an optic metaphor of her emotional compartmentalization. To channel Lacan for a second, the mirror becomes her inner world externalized and transformed into her own spatial identification. At the novel’s dénouement, after Masako kills Satake the male sociopath in an abandoned factory (which is not only the perfect mis-en-scène for a gritty thriller but also the perfect metaphor of the moral vacancy of capitalism that catalyzes almost every murder and tragedy in Out), Masako also looks at herself in a dirty mirror. Not only does Out repeat the trope of the psychoanalytic female gaze, but the mirror signifies both Masako and Yayoi’s optical self split into an objective and subjective perspectives, a first person and third person modality, a primary and a reflective reality, making the trope of cultural compartmentalization existentially literal. The mirror reflects what they are, which is ontologically polymorphous. The mirror is the thing it reflects, which is the totality of their contradictory professional spheres, emotional realities, and conflicting microcultures. But the mirror also prevents what it reifies, which is the possibility of reunion between a Lacanian organism and its reflected reality. Yayoi and Masako’s reflection distances themselves from the real pain inside their own bodies, both multiplying their visual identity and also separating them from their physical identification. In both instances of mirror play, cultural compartmentalization becomes a conscious survival strategy involving the repression of the conflicting instincts of self-destruction and murder, juggling multiple gender, professional, familial, social, and sexual identities, intersecting and separating spheres of cultural, professional, and class subjectivities, and negotiating fluid cultural identities that shift according to context, victim, and crime. At the same time, Out’s mirror play reads as a manifestation of  physical and psychic fragmentation too, an illusory self split between the material and visual selves of the characters, their external beauty and their inner moral degeneration, their youthfulness and sinking feeling of mortality, but also the one-dimensionality of their reflected lives in the mirror and the three-dimensionality of their material lives in the flesh, a chasm that signifies their own atomization as both victims of Japanese patriarchy and also avengers against it.

Kirino’s Out is an exhausting but indispensable blood-and-guts novel that constructs real, complex, contradictory, and authentically credible female characters who transgress the social hierarchies of Japanese culture while also defying the sexist and stock stereotypes of women as helpless victims in both slasher and thriller genres. The self-affirming (and in some ways, self-justifying) violence in Out is definitely not for the faint of heart, nor is this violence without its own moral hypocrisies, convenient genealogies of pain, and internal contradictions. Even so, the female characters in Out are simply speaking the cultural vocabulary of male violence and reflecting it back at us in this novel, which is why both the mirror and the butcher knife play such important roles in the characters’ own self-awareness as abused, silenced, and ignored women who become human butchers and also cold-blooded killers searching for a way out of the patriarchal maze, which of course, always leads right back to the center of the battle royale.