Home
»
Critical Essays
»
The Radical Politics of A Christmas Carol 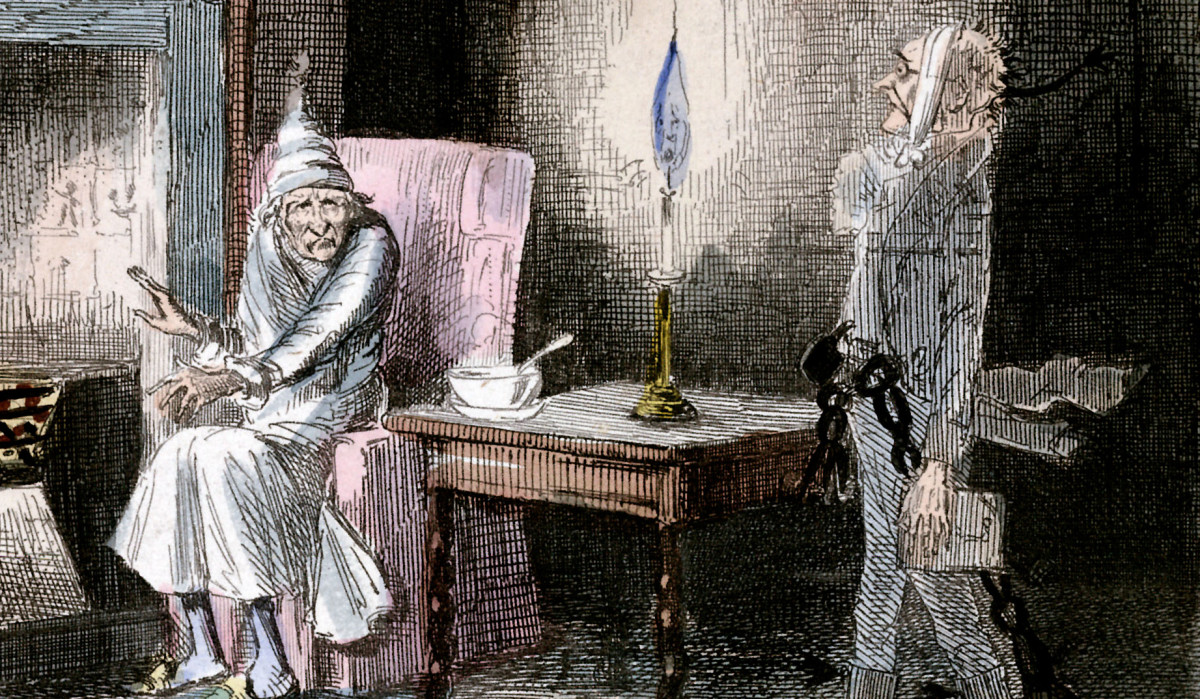 When Charles Dickens set out to write A Christmas Carol, he was not concerned with distilling the essence of the Christmas spirit in a tale of redemption and festive cheer that would capture the hearts and imaginations of generations to come; he was attempting to communicate a radical political message, and to do so in a form that would help to effect real change.

In 1843, Dickens read the second report from the Parliamentary Commission on the Employment of Women and Children, and he was horrified by its findings. The report described the appalling conditions in which sometimes very young children were working, including dangerous jobs down mines and in factories. He described himself as “perfectly stricken down” by the contents of the report and resolved to write “something to strike the heaviest blow in my power” on behalf of these children whom he saw as the innocent victims of the Industrial Revolution.

Following a talk he gave that October in Manchester, Dickens resolved that the best way to communicate the horrors he had read about in that report was to write not an article, as he had originally intended, but a story. This story, he proposed, would “come down with a sledgehammer force” and rouse the general public from their antipathy towards the less fortunate. That story was to be A Christmas Carol.

In this seemingly innocuous festive tale, Dickens mercilessly castigates the uncharitable rich. He depicts them as hoarders of wealth, ignorant bystanders to grave injustices, and, in the case of his protagonist Ebenezer Scrooge, as actively cruel and hard-hearted misers.

With his cries of “Bah humbug!” Scrooge despises Christmas and particularly the spirit of giving and charity that accompanies it. During a visit by two charity collectors seeking relief for the poor Scrooge asks, “are there no prisons?”, “And the union work houses? . . . Are they still in operation?” On being informed that these institutions were indeed still fully operational Scrooge declares, “oh! I was afraid, from what you said at first, that something had occurred to stop them in their useful course . . . I’m very glad to hear it.” In this exchange, Scrooge echoes the sentiment of many of Dickens’s contemporaries: the idea that the poor don’t deserve charity, and that those institutions—the prisons and the notorious Victorian workhouses—are the best that they should expect.

Scrooge’s reasoning for his lack of charity is that “I don’t make merry myself at Christmas and I can’t afford to make idle people merry.” Readers will appreciate that he can in fact afford to make both himself and many others merry on the wealth he has amassed; he merely chooses not to. And his characterization of the poor as “idle” is, again, one shared by many wealthier Victorians. The prevalence of this viewpoint in Victorian society was one of the factors that led to the Poor Law Amendment Act of 1834, which established workhouses as a legal obligation for parishes. Workhouses reduced the cost of caring for the poor by providing (less than) the bare minimum in terms of living standards in exchange for long hours of often dangerous work. Scrooge’s support for the workhouses would not have been out of the ordinary for Dickens’s contemporaries.

The negative attitude towards the poor at this time is captured in the writings of economist Thomas Malthus. Malthus believed that the poor were responsible for their own poverty. In his writings, he presents the poor as stupid, feckless, and workshy—a narrative still promoted today among certain political factions and the media. He criticizes poor families for having too many children, suggesting that there isn’t enough food to go around, and blaming them for creating the conditions for famine. The notion of an impending famine and a “surplus population” was one of the key and long-lasting ideas to emerge from Malthus’s work, and one that Dickens clearly challenges in A Christmas Carol. He has Scrooge directly reference Malthus in that same exchange with the charity collectors—when told people would rather die than end up in the workhouses, Scrooge responds, “If they would rather die [. . .] they had better do it, and decrease the surplus population.” These words were chosen very specifically to echo Malthus and to present Scrooge as someone that subscribes to that particular viewpoint. This connection would have been obvious to Dickens’s contemporary readers.

In addition to associating Malthus’s writings with Scrooge’s palpable coldness, Dickens also sought to actively refute the economist’s claims in the content of his story, specifically the suggestion that resources were too scarce for the poor to have so many children. Describing a Christmas market Dickens writes:

The poulterers’ shops were still half open, and the fruiterers’ were radiant in their glory. There were great, round, pot-bellied baskets of chestnuts, shaped like the waistcoats of jolly old gentlemen, lolling at the doors, and tumbling out into the street in their apoplectic opulence. There were ruddy, brown-faced, broad-girthed Spanish Onions, shining in the fatness of their growth like Spanish Friars, and winking from their shelves in wanton slyness at the girls as they went by, and glanced demurely at the hung-up mistletoe.

Dickens here presents the shops at Christmas as abundant with deliciously ripe fruits, nuts, and vegetables, as well as an array of fresh poultry. These shops, “half open” into the early evening, still have plenty of goods to sell. This directly contradicts Malthus’s arguments, showing that there is in fact enough food to go around, even as some go hungry. As the passage continues, Dickens describes “great, round, pot-bellied baskets of chestnuts, shaped like the waistcoats of jolly old gentlemen.” The adjectives “great,” “round,” and “pot-bellied” all describe the fatness of the produce, underlining the idea that there has been a strong harvest and that it is a time of plenty as much as it is a time of want. By comparing the fat baskets to “the waistcoats of jolly old gentlemen,” Dickens also connects the wealthy to the wealth of food being described. The semantic field of abundance and plenty in this passage exaggerates both the wide availability of food and the greed of those “jolly old gentlemen” that consume it.

Additionally, while “jolly” may appear, at first, to be a positive descriptor, capturing the festive spirit of the season, read within the wider context of the passage it takes on a more negative aspect: to be jolly as you eat well while others starve betrays a lack of awareness or even care. The negative aspect of these wealthy gentlemen is further underscored in the personification of the Spanish onions as Spanish Friars “winking” in “wanton slyness” at the passing girls. The implied lust speaks to the broader unsavory appetites of these gentlemen—in this case, religious men (friars)—presenting them as immoral in their greed.  In moments such as these, Dickens is communicating to his readers that the cause of poverty is not the poor themselves, as Malthus argued, but the wealthy people who hoard the plentiful food for themselves. And Scrooge, who amasses a great deal of wealth for the sake of pure acquisition, while spending next to nothing, is worse even than the frivolous revellers. The only thing lying “idle” in this story is Scrooge and his unspent money.

Alongside these negative depictions of the uncharitable rich (balanced by positive portrayals of the charitable rich in the form of charity collectors and Scrooge’s nephew, Fred), Dickens also presents an image of the so-called deserving poor in his depiction of the Cratchit family. The Cratchits are a poor, working family with a number of children, including a disabled child they lovingly call Tiny Tim. As the Ghost of Christmas Present tells Scrooge, this family is the “surplus population” he would condemn to the workhouse or to death should their circumstances get any worse. They are the human face of poverty that Scrooge and the uncharitable rich choose not to see.

Tiny Tim’s disability is never fully explained, yet it becomes clear that it is an ailment brought about or worsened by poverty: he dies in the future foretold by the Ghost of Christmas Yet to Come but makes a full recovery in the timeline where Scrooge intervenes. The plight of Tiny Tim demonstrates the consequences of the wealthy in society neglecting their duty to the less fortunate, and it does so in a manner designed to be as emotive as possible. Tiny Tim is the apotheosis of kindness, innocence, and generosity of spirit. His cheerful nature and positive outlook cast him as the ideal Christian child as he reflects on how pleased he is that worshippers at church saw his disability, as they might as a result be brought to think of the less fortunate at Christmas. While to modern sensibilities this characterization may be almost intolerably saccharine, the fate of Tiny Tim still strikes a deep chord.

Beyond the angelic Tiny Tim, for whom the reader and Scrooge come to feel deeply, are the older siblings Martha, Belinda, and Peter, and two smaller Cratchits (an unnamed girl and boy). Bob Cratchit is Scrooge’s clerk, who is paid starvation wages—just 15 shillings a week. In order to keep the family out of the workhouse, their two older children, Peter and Martha, are sent out to work.

Martha is an apprentice at a milliner’s, where she is exploited and underpaid. She arrives late to her parents’ house due to long work hours (such as Dickens read about in the parliamentary report that prompted his writing), even working on Christmas day. Younger than Martha, Peter Cratchit is proud to have been recently found a position, but the description of the “monstrous” collar on the shirt he has had handed down from his father suggests that he is too young to be working. In presenting the challenging circumstances in which the Cratchits live, Dickens shows a hard-working family that struggle to provide for themselves in spite of their efforts. He also presents a grateful and loving family who are without complaint. As Scrooge observes, they enjoy their meager Christmas dinner as if it were a grand feast, making the best of what little they have. This image, while open to criticism as idealized (should those who are struggling have to be the perfect image of a family in order to receive sympathy and support?), overturned more dominant ideas of a feckless, workshy poor and encouraged readers to think, first and foremost, of the innocent children who are hardest hit by their parents’ circumstances.

The impact of Dickens’s story was immediate and wide-reaching. A Christmas Carol became a bestseller and was quickly staged as a play in a number of adaptations. This widespread success may have helped in achieving changes to the law surrounding child labor. Shortly after the publication of the story, the 1844 Factories Act established health and safety guidelines, including the edict that no child or young person was to clean mill machinery while it was in motion. It also limited the hours worked by children and made schooling a necessary part of the workday. Further acts of parliament over the course of the nineteenth century eventually culminated in the abolition of child labor, via the Children and Young Persons Act of 1933.

As we celebrate Christmas this year, it is worth remembering Dickens’s story and the radical politics that underpin it. While child labor has been legislated against, child poverty has not. If A Christmas Carol were written today, it might take aim at austerity politics, which tell us, as Malthus did all those years ago, that there isn’t enough to go around—even as billionaires shoot themselves into space.