Home
»
Reading
»
The Space Where God Used to Be 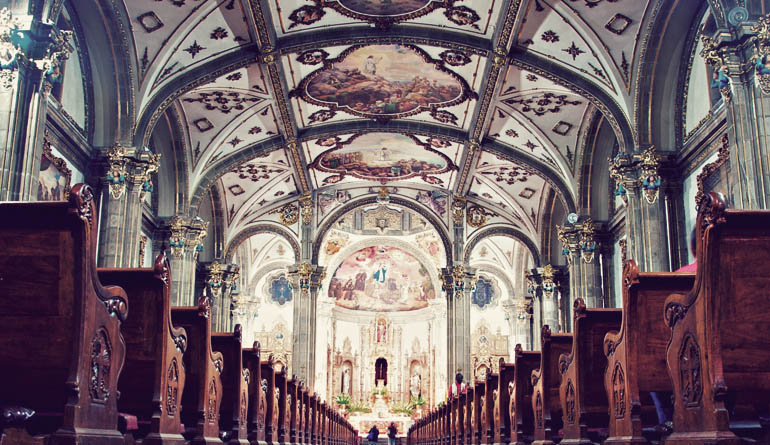 To say that Patricia Lockwood is a lapsed Catholic doesn’t begin to cover it. The poet and author of the memoir Priestdaddy is the daughter of a Catholic priest, either the beneficiary or the victim of a loophole. Her father was a Lutheran minister who converted to Catholicism, receiving dispensation to become a priest after he was already married with children. Lockwood’s writing is irreverent and profane. She once ran away from her family and their church, but in her memoir she returns home and probes the mysteries and secrets of both. Sometimes the result is sidesplitting comedy. Other times it looks more like grief.

Throughout the memoir, it’s clear that Lockwood has left the church and is comfortable criticizing it, but it’s not until the end, when she’s left her parents’ house again, that her position on God is made explicit. Her husband asks her when she stopped believing.

“It just seeped out of me, after I left the house. It was like forgetting a language you spoke a long time ago, when you were a child.” That is not quite right, though—I did not forget so much as turn it inside out, repurpose it, and occasionally use it to tell jokes like “Jesus is SUCH a manger babe . . .” People do sometimes accuse me of blasphemy, which is understandable and which is their right. But to me, it is not blasphemy, it is my idiom. It’s my way of still participating in the language I was raised inside, which despite all renunciation will always be mine. The word “God” does not fall out of the vocabulary, as the sun does not fall out of the sky . . .

Even without belief in God, the scaffolding of religion remains. As I read the memoir, I often thought of Flannery O’Connor’s A Prayer Journal. Lockwood gives O’Connor a nod at the outset of the book, as I suppose any Catholic or ex-Catholic writer must. But the kinship is more than superficial, despite the overwhelming difference that Lockwood has rejected God and O’Connor yearns for God, largely because they are both writing within the idiom Lockwood identifies.

O’Connor began her prayer journal when she was twenty years old, out of a desire to understand how to be faithful and resist temptation, and how to make her work serve God. She struggles to grasp her creative process, with its dramatic highs and lows. Her faith extends to the idea that her stories come straight from God.

Immediately after an entry stating that she’s discouraged about her work, she thanks God for a story but then expresses doubts about it.

Dear God, tonight is not disappointing because you have given me a story. Don’t let me ever think, dear God, that I was anything but the instrument for Your story—just like the typewriter was mine. Please let the story, dear God, in its revisions, be made too clear for any false & low interpretation because in it, I am not trying to disparage anybody’s religion although when it was coming out, I didn’t know exactly what I was trying to do or what it was going to mean. . . . Please don’t let me have to scrap the story because it turns out to mean more wrong than right—or any wrong. . . . I wish you would take care of making it a sound story because I don’t know how, just like I didn’t know how to write it but it came.

O’Connor, the writer, is only the subject or the actor in moments of uncertainty or inadequacy. (“I didn’t know . . .”) God, who gives her the story, is the subject, or the story is the subject. The story “came.” Although she describes herself in another entry as an artist, “in the sense of aesthetic craftsmanship,” all credit for her story goes to God. All of the mistakes are hers, though, and she prays to God for help in fixing them. She calls herself an instrument.

Lockwood is also fascinated by the creative process and examines her own acts of writing. Her career took off when her poem “Rape Joke” went viral. God isn’t a presence in the creative act, but her account of writing it has much in common with O’Connor’s:

I wrote it in a strong fluent flood down in Savannah, sitting in a white towel on the edge of the bed while afternoon sunlight lavished over my shoulders and my coffee left a cold ring in its cup. Poetry is a companion: you sit with it mostly in silence, and look up from your reading every once in a while and nod to it, and sometimes there are great rushes of like-minded, sentence-finishing conversation. It came all at once, the lines racing off the edges of the pages as if to jump back into the stream of present time: all of it happened again, red and fresh, but I could move my body through the narration as I could not move it through that night. Beads along a razor blade, but this time I controlled the cut. I didn’t know if I ought to publish it, because I never wrote about the things that really happened to me, the real things.

Both O’Connor’s story and Lockwood’s poem “came.” Both writers are a part of the writing but also, at least in some moments, conduits of forces they don’t quite understand, and in the end they’re both uncertain of whether their work should be published. Lockwood begins with herself as the subject and the poem as the object. “I wrote it . . .” But in the next sentence, “poetry” becomes the subject, personified as a companion, and it remains the subject in the sentence after that. Nonetheless, Lockwood controls the narration, the cut, in a way O’Connor doesn’t explicitly give herself credit for.

Like Lockwood’s Poetry, O’Connor’s God is mostly silent until the creative act. O’Connor addresses her entries to God, but God’s end of the conversation is white space. She seems to feel God’s presence most strongly when she writes the story. Both writers view their craft as a calling and describe the writing process with reverence and wonder. Both fervently hope the words they write will convey the right meaning. The difference is where the words come from.

Lockwood is a nonbeliever, but still there is some mystery at work, a magic she accommodates by making Poetry a character. God doesn’t fall out of the vocabulary, Lockwood says, and when looking at these two passages together, the space God could occupy is apparent. Poetry takes up some of the space and the agency that O’Connor attributes to God. The rest goes to Lockwood, the poet.