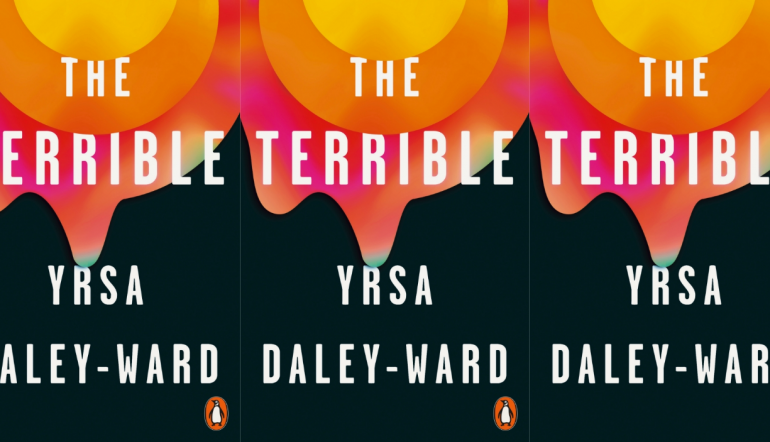 Of all writers recently assigned the title of “Instagram Poet,” Yrsa Daley-Ward might be the only one that has managed to officially publish a substantial memoir as a result. An English writer of Jamaican and Nigerian heritage, Daley-Ward is the queen of reclaiming her life’s suffering, transforming negativity into a force of healing through the radical act of self-care. And what exactly does her self-care entail? Poetry, of course.

If Daley-Ward’s 130,000 Instagram followers are proof of anything, it’s that she makes the emotional brutality of dealing with family, adolescence, addiction, and sexuality accessible to her readers. In fact, it’s important to note that The Terrible functions as a natural extension to bone, Daley-Ward’s debut collection of prose and poetry. Although the writer self-published bone in 2014 and boosted the visibility of her poems through social media platforms, it’s possible that Penguin decided to officially publish the collection in 2017 as a preview to this upcoming memoir. Both books fearlessly employ a defined and coherent style of writing that give readers easy access to Daley-Ward’s remarkable growth, showcasing how communicating through poetry is the only thing that could help her reconcile her complex life.

With language on social media being a big promoter of poetry’s accessibility, Daley-Ward tackles difficult topics like sexual abuse, addiction, death, and bigotry by describing her experiences in a nuanced yet extremely straightforward manner. Given that most of the memoir reveals the perspective of a child growing into an addict, Daley-Ward’s stream of consciousness doesn’t euphemize harsh truths. Early in the memoir, when speaking to Little Roo, her younger brother, Daley-Ward employs childlike reasoning to explain why they should refer to themselves as “brown” instead of “black.” She says, “Coal is black. Night and evil things are black. Brown sounds nicer.” The child’s seemingly simple logic is layered with a history of scaling and subduing blackness that is insinuated in the text through the storytelling of her Nigerian and Jamaican ancestry.

Despite her use of uncomplicated language, Daley-Ward continually incorporates gut-wrenching imagery in her work, and in both bone and The Terrible, she packages heightened emotion into just one or two lines. Another instance is when Daley-Ward feels bad that both her brothers don’t have caring and attentive fathers in their lives. She claims, “I made a note to share my father [with them],” though she has never even met her father, never had him as her own to actually be able to portion him away. She says,

When we got home to Grandma’s, I at once began to pen a letter to the Amazing Nigerian in pink, green and blue ink. I told him we didn’t know each other yet but according to Mum this was about to change.

The “Amazing Nigerian” is how Daley-Ward addresses her father based on the stories her mother has told her. It’s these poignant distinctions between the imagination and reality that make Daley-Ward’s work so difficult to put down.

Moreover, it’s Daley-Ward’s ability to provide a lyrical account of her seemingly dark life that sheds the memoir with a soft, intimate light that only a poet’s self-analysis can provide. For instance, the personification of “the terrible” as an abusive relationship presents us with Daley-Ward’s childhood trauma in a glaring, delicate manner. The terrible and the narrator are not mutually exclusive. As the memoir proceeds, we don’t just grow up with Daley-Ward—we grow up with the terrible as well. It is a haunting presence in her life, perhaps an unseen sibling or an imaginary friend. It is cruel, toxic, impossible to get rid off. It controls Daley-Ward to such extremes that, at times, it may very well be her.

Recounting the tales from her childhood, Daley-Ward only makes small, sporadic mentions of the terrible. Young Daley-Ward is unable to concretely understand the trauma of growing up as one of the only children of color in a predominantly poor, white neighborhood; the trauma of being raised by an absentee, single mother always caught up in toxic partnerships; the trauma of having to navigate the extreme Christianity of her family. But she knows the terrible exists—she recognizes it with her eyes closed. She calls it “the terrible here and now” and finds that it is perpetually growing. It’s only after she has moved through phases of addiction and sexual encounters, after she has had several mental breakdowns, that she reaches the climax of the memoir and finally addresses the terrible’s power with direct, brutal honesty:

The terrible comes like a bang in the night. It takes a drink and several more and comes to plague you in the morning; it damn near poisons you with all the drink it needs to stay alive. It toys with you in the morning after — stays the entire day, squeezing you by the shoulders, making your hands shake. It smiles at you, the terrible. Sitting, arms folded, in the corner of the room. It just can’t help itself.

It’s such a lonely thing.

The terrible needs to eat and it eats whole lives up in one sitting.

Indeed, it is this power dynamic between Daley-Ward and “the terrible” that gives the memoir its vivacity from start to finish. The reader stands to learn from Daley-Ward the secret to survival. How does the shadow of “the terrible” transform into the same self-sustaining optimism that Daley-Ward ends the memoir with by calling “a terrific magic”? How does one escape the holds of the abuser that gets in your head and screams,

DON’T YOU KNOW I FUCKING KEPT YOU SAFE

Don’t you know I gave you the best timelines, a glittering story, a punch line, a reason to live. Don’t you know the drugs didn’t kill you —

Don’t you know without me you’d diediedie in the mundane?

Close to the epilogue, Daley-Ward addresses not only this ability to escape but also her own ever-growing success as a poet on social media. She repeats, “The terrible writes poetry, impresses people.” In realizing this, she uses the power of the terrible to find success for herself. She takes hold of her life, her actions, her trauma. She learns and unlearns. More importantly, she demonstrates how translating trauma into poetry can be a fierce act of healing.

We don’t just grow up with Daley-Ward in this memoir—we grow up with the terrible as well. It is a haunting presence in her life, perhaps an imaginary friend. It is cruel, toxic, impossible to get rid off.