In a blog series for Ploughshares, I ask a poet and an artist the same set of questions. Some of these interview questions are borrowed (and modified) from other interviews, with painter B. Wurtz, artist-activist Ai Weiwei, and dancer Jeroboam Bozeman.

This time, I talk to poet francine j. harris and interdisciplinary artist, Devin Kenny, whose work spans performance, scholarly research, sculpture, digital media, and music. Kenny’s work explores a kind of social Internet of things, demanding that we look frankly at our relationship to the technologies we surround ourselves with. 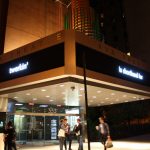 In the interviews below, harris and Kenny explore how technology affects language, how they go about the processes of investigating their own work, and who their mentors are—as well as how they themselves have mentored others.

How do you decide what objects merit inclusion in your work?

There also then has to be this agreement, or a series of agreements, about the connotations of those objects. It’s not as though everyone has to agree on the connotation but what you say about choosing objects which house multiple possibilities, that seems like a space-making maneuver. It allows certain others to inhabit the image.

fjh: It’s interesting because that’s time dependent. Using a cellphone now to record confrontations between people and police is not something that we maybe had in our connotation about the cellphone even five or ten years ago. Things shift all the time.

Devin Kenny: There was one [song on Alone We Play, Devin’s latest album] where there was a guy talking about how he wishes his girlfriend wouldn’t make Facebook statuses about when he’s coming over, because she lives in a public housing complex that he doesn’t live in and he has enemies that live in that complex. So he’s like, oh her friends may be friends with some of my enemies. So, when she makes a status update like, “I can’t wait for my boyfriend to get home,” there could be someone waiting for him in the stairwell that’s gonna cause bodily harm to him or kill him. Those are things that Wired Magazine doesn’t talk about. Those are things that, when they talk about ‘ushering in a new society’ because of telecommunications, they don’t think about the ways in which the technology itself doesn’t change society; it just matches to what’s already there. There’s this really good Soulja Boy song called “Digital” and he’s talking about his car [having] a digital dashboard and he’s really hyped about having a digital dashboard. I’m like, yeah that’s cool and all, but what does it mean to have a digital dashboard? What are some of the other aspects of that?

What are your investigation methods?

fjh: I’ve wanted to write a book of historical poetry since I started writing and I don’t know how to do it. I was telling a friend of mine that the problem with the research is that it’s a matter of order. My analogy was that non-fiction writers research and then they write. As a poet, when I write and then research, it can be hard to write after the research. After I find out if something is true or not true, I don’t have anything else to say about it. I’m so impressed with folks that can take on these historical narratives and then offer lyric to it.

DK: I’m working on a project right now with my friend, Justin. We’re going to to try to make a conlang [constructed language]. It’s going to be partially informed by African American Vernacular English and partially informed by whatever cool linguistic attributes that he’s into or that I’m into. So, I suggested that it should have a lot of ‘ah’ sounds, like ‘cinema.’ Like maybe this sound group will be in the core of a lot of words. It’s like making a new structure. The structure can be written or it can be spoken, but it also exists outside of those two iterations.

What has mentorship been like for you, on both sides?

fjh: As a younger poet, the closer to some kind of formal notion of mentor that I got with someone, the less tenable it has often seemed. Folks are busy. People have different notions of what those kinds of relationships are supposed to look like. I’ve tried to be more fluid as I’ve gone along in my career because I want my relationships with people to be based on mutual love and respect, and less on what I can get, or do, for them. In that, I hope that I have always tried to be considerate of folks’ time. Currently, I have the great fortune of being somewhat formally mentored by Carl Phillips and Mary Jo Bang, who are so wonderful and have been so generous with their time and advice, and whom I also count as dear friends.

There is that idea that you mentioned, of a mentor being someone you just sort of look to as aspiration. You believe they are getting life right, poetry being part of that, and you take note of how they do things, and sometimes seek their advice. I often joke about getting a t-shirt that says “What would Ross Gay Do?” because of how often I find myself using that measure to think about my responses to various dilemmas. I think the same way about my friends Marcus Wicker and Gabrielle Calvocoressi. I just think they handle things so well. And they have always, always had sound wisdoms to offer in our friendships, along with the joy.

DK: I talk to a lot of people online. People who e-mail me or Facebook message me about things they’re working on. My dad’s an imam, so, I don’t know, maybe I picked up some of that. I did a collaboration with MoMA teens this year. It’s a voluntary after school program for high school students and they have to apply for it. I had a studio next to [MoMA] PS1 and I used it as classroom. I gave a conceptual prompt, “Investigate an aspect of your inheritance that you have either disavowed or distanced yourself from, or never really thought about, and bridge that with a part of your current identity though some work. Do some kind of work that addresses some questions and bring these two things together.”

Do you do that [in your work]?

DK: I grew up in Chicago, in Hyde Park-Kenwood, South Side. I grew up with my grandmother, who moved to Chicago when she was 15 or 16. She was 16. She grew up in an industry town outside of New Orleans. So she has a lot of country in her, but also, within Louisiana, she was considered a rich girl because she could have sweet soaps. Back in the day, regular soap wasn’t scented so she was special because she had scented soaps. I have a lot of Southern heritage but I feel alien from that. So, when encountering the possibility to work with Drag Lomax [a black folk musician], I was like oh cool–because this is music that people associate with a more rural way of living but it’s not that intrinsically. In the same way that Woody Guthrie or Bob Dylan have a kind of constructed relationship to down-home Americana. They were just picking up from people who were actually living it. [Woody Guthrie] was trying to find a music that could be a vessel for Marxist political ideas.

This interview has been edited and condensed.