Home
»
Reading
»
This is Normal: Reading Evil in the Everyday 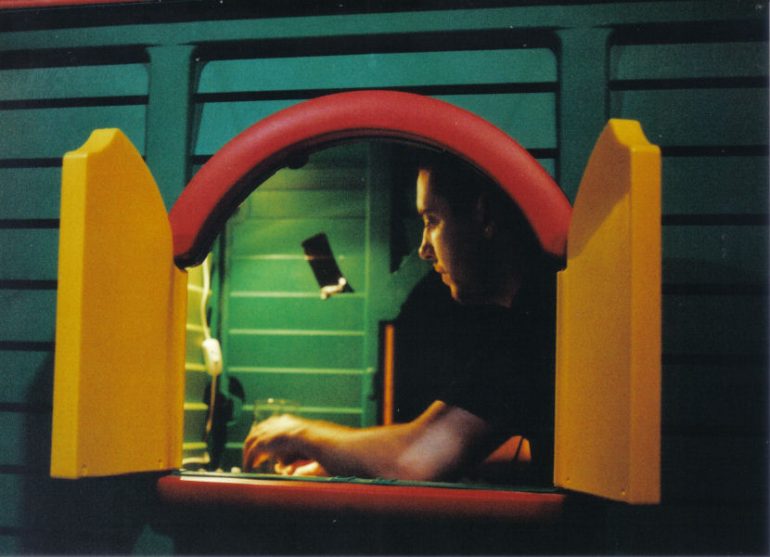 Thanks to the snowstorm hitting Boston, my flight home from the annual Association of Writers & Writing Programs conference was cancelled, and I found myself stranded in DC for another night. Downtown seemed suddenly strange and quiet, but a few blocks north I stumbled into a café full of people who probably had no idea that twelve thousand writers had stormed the city that week.

As I settled into a back corner of the café, I realized I hadn’t read the news in days. AWP was by no means a distraction from the overwhelming chaos of Donald Trump’s first few weeks in office. It was present in almost every interaction I had, every reading or panel I attended. Protests had occurred in the halls of the convention center, and a drove of writers had gone to the capital to meet with state representatives. All of this meant I’d been unable to keep my usual vigil over Twitter. I couldn’t wait for breaking news, biding my time until the next, somehow worse development in what I’d heard many conference attendees describe as the “new evil” we’re facing.

On the second day of the conference, I’d gone to “Raising Hell: Writing from the Extremes,” a panel on depicting “the baleful extremes of human experience” in fiction. After reading and talking about their work, all five of the panelists seemed to agree that evil is actually ordinary. “When you’re writing about evil you’re not really writing about anything alien,” explained Alexander Chee, who read from his 2016 novel The Queen of the Night. Though the book foregrounds the enthralling, ever-glamorous story of Lilliet Berne, an American orphan-turned-Parisian opera singer and courtesan, violence hovers above the text. Trauma descends on the reader in incongruous flashbacks. As the five-hundred-page novel unfolds, it’s clear that the extravagant dresses and jewels and shoes are not only meant to bolster Lilliet’s present identity, but also to hide her past. “Most of the time,” writes Joan Acocella in her review of the book for The New Yorker, “what we’re looking at isn’t horror but just hiddenness.”

When it was her turn to speak, Roxane Gay simply said, “Evil’s not new.” Known for her essay collection Bad Feminist (and her Twitter clap backs), Gay read from Untamed State at the beginning of the panel. Her debut novel chronicles the kidnapping and torture of Mireille Duval Jameson, an affluent American-born woman who’s taken while visiting her parents in Haiti. Despite being violently beaten and pulled from her car in the first few pages of the book, the narrator tries to convince herself that the abduction wasn’t personal. “Kidnapping was a business transaction,” she tells the reader, “one requiring intense negotiation and, eventually, compromise.” However, Mireille’s father refuses to pay her ransom, and she’s held captive for thirteen days. Since Untamed State was released in 2014, Gay explained to the audience at AWP, at least two or three women a year approach her at events to say they’d been kidnapped in Haiti.

Gay then told the audience she’d been hearing about this “new evil” or “new era” all week. She paused, and I straightened my back against the narrow conference chair, waiting for what might come next. “This is only new for white people,” she said frankly. “People of color have always known that the world is an evil place.” The audience laughed in a breathy, tired way, and I wondered whether it was a sign of exhaustion or admission.

As the panel went on, I tried to make sense of my own simultaneous awareness and denial. I’d known, for example, that the president’s flurry of executive orders did not signify a new or emerging evil. They were merely the product of his many campaign promises, promises he had to make to a white nationalist constituency. Or, to be totally cliché, he didn’t start the fire; it was always burning. If anything, Trump has become a simulacrum of his own supporters. But I had, admittedly, fallen into speech patterns that positioned the present as somehow worse than the immediate past: “now that he is our president,” “since the election,” etc.

The café was too loud for me to read, but I opened Maggie Nelson’s The Red Parts anyway, hoping I could prolong the inevitable return to my phone and breaking news. Combining memoir, lyric essay, and true crime investigation, Nelson’s text examines the 1969 murder of her aunt Jane and how the case was re-opened with a new suspect thirty-five years later. When Nelson first encounters the man accused of Jane’s murder in court, she’s shocked by his paunchy, bespectacled ordinariness. “Where I imagined I might find the ‘face of evil,’” she writes, “I am finding the face of Elmer Fudd.”

Vanessa Hua, whose debut novel A River of Stars is forthcoming in 2018, had also described evil as everyday and banal, and I considered that as I sat in the crowded café. The word “banal” always sounds like a groan to me, but maybe that’s just my way of remembering what it means: so unoriginal as to be boring. Dull. It felt blasphemous to think of the present moment in that way. On Twitter, people keep saying this “isn’t normal.” In this story, the villain is an exception to the rule of normalcy. Maybe, I thought, that story is easier to tell than the real one.