The warmer weather brings with it some of the best publications of the year, and here are four of our spring favorites. 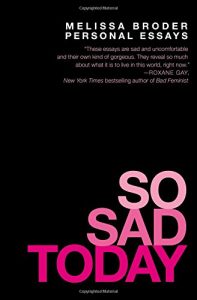 Poet and Vice columnist Melissa Broder is undoubtedly one of the best essay stylists at work today. Her collection based on her previously anonymous Twitter account @sosadtoday made me fall in love with the essay form all over again. Broder’s writing is funny and sober, her honesty uncomfortable and comforting, and reading her book is just like getting a text from your best friend.

So Sad Today dissects topics we’ve all experienced but are reluctant to discuss: falling in and out of love, diving into and crawling out of addiction, and the crippling realities of anxiety and depression. In “I Want to be a Whole Person but Really Thin,” Broder connects her eating habits to her habits of mind. “Never Getting Over the Fantasy of You is Going Okay” reviews the possible remedies to infatuation in the digital age, and “Help Me Not Be a Human Being” is a series of love stories written for the insecure person inside all of us. She also examines the naked allure of sexting, the crucible of loving someone with a chronic illness, and how the internet is sometimes our most reliable, if not most sincere, companion.

It’s easy enough to say that So Sad Today is brutally honest, but there’s a real kindness to Broder’s honesty, too, the intimacy with which it beckons a reader’s shy and tender heart. In Broder’s company, we can dare to tremble at our own depths.

The Regional Office is Under Attack! 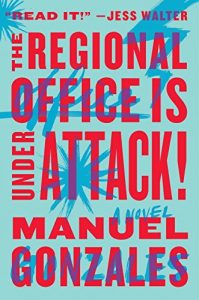 Two words: Female Assassins. Need I say more? Manuel Gonzales, author of the collection The Miniature Wife and Other Stories, has written a slayer of a first novel in which Earth’s best hope of avoiding annihilation lies in the hands of the young women who work at the Regional Office. Disguised as an international travel company, the Office and its operatives coast along, saving the world one mission at a time, until it becomes clear a traitor is hiding in their midst.

Jointly narrated by Sarah, a faithful employee at the Office, and Rose, a badass soldier determined to take the operation down, the novel bends around genre and literary fiction. The Office and its nemesis both recruit girls who are alone, but not necessarily lonely. They are trained fighters, and fight, they do–with swords, kick-punch combos, and even mechanical arms.  These warriors pitted against each other have more in common than they realize–they survive as fellow victims of the secrets kept from them, and they also lead with the depth of loyalty they’ve earned, but have learned not to expect.

A fusion of mythology, action-sequences, and New York City élan, The Regional Office is Under Attack! offers up a vivid tableau of the world’s darkest forces and the intrepid heroes who rise up to challenge them. 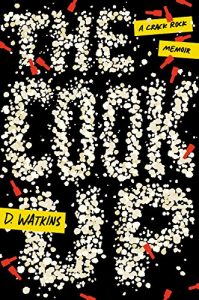 The Cook Up: A Crack Rock Memoir
D. Watkins
May 3
Grand Central
$26

In his electric coming-of-age memoir set in the streets of east Baltimore, D. Watkins writes that “it took twenty-three years for me to figure out that money and love are two different things.” As a boy, D. was shielded from a life of drugs and crime by his brother Bip, who had determined to get D. an education. But when Bip gets murdered, D. must choose between weathering the subtle racism he experiences in higher education and taking over the drug business his brother left behind.

After D. cooks his first batch of crack and it hits the streets, he finds himself making more money than he can spend. For the first time, he’s able to care for himself, his friends, and his community. He can provide the necessities and more: employment, shelter, diabetes medication. The weight of that responsibility bears down on him as he sees friends get shot, brothers sent to jail, and childhood companions waste away in their addictions. When he meets a young woman who exposes him to a new kind of living, D. fights for a way out of a game that doesn’t play fair.

This memoir depicts the rigor of life in east Baltimore without apology: the misogyny, the poverty, and the heart. A compulsively readable book for law-makers and citizens, city dwellers and suburbanites, The Cook Up ultimately serves as a testament to the transformative power of reading. 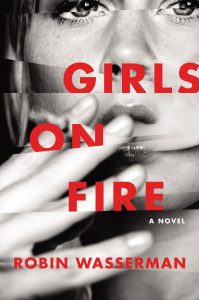 In her first novel for adults, author Robin Wasserman spins a chilling mix-tape of love, girl crushes, secrets, and revenge. Set in the early 1990s amid the grunge craze sweeping the nation with Kurt Cobain at its helm, Girls on Fire takes aim at the quicksilver devotion of youth and the ruin left in its wake.

Meet Dex and Lacey: two teenage girls who share a bond that their families can’t begin to understand. It’s deeper than their shared love of the music Lacey blasts in her Buick as they ride into the night, it’s stranger than the rumors of Satanic cults and devil worship shaking the town, and it’s truer than any lyric written by even Kurt Cobain himself. Dex and Lacey make each other better; they make each other worse. But even the best of friends keep secrets. What really happened on Halloween night when Battle Creek’s beloved boy toy Craig Ellison committed suicide? In a small town where enemies often masquerade as friends, the most terrifying comfort comes in truly being known by someone else.

Read it on vacation; read it on the train; read it at the beach; read it at a campfire just about to burn out–but don’t miss it. Girls on Fire will haunt you in a most necessary and satisfying way.