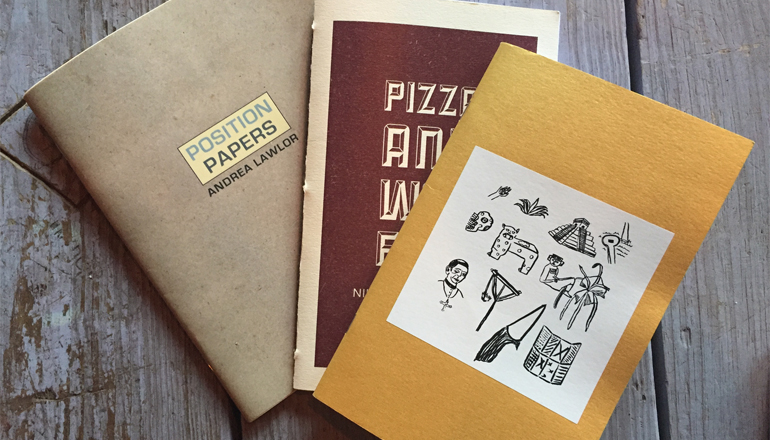 The three chapbooks here use prose poetry almost exclusively for their projects. Each has a clear theme and purpose and uses the form to either grapple with the world, rewrite history, or install a better future—perhaps they each, in a way, combine these ideas, reinventing prose poetry for this decade. While Nikki Wallschlaeger’s work resembles prose poetry more broadly, it uses spaces for its pacing, grammar, and syntax instead of punctuation. Angel Dominguez uses the form to write a series of letters, and Andrea Lawlor’s prose reads like a poetic manual for utopia.

Pizza and Warfare, true to its title, centers around memories of pizza, though it looks back on those memories with new eyes that can now recognize, name, and criticize America’s white supremacist patriarchy, focusing a lot on mother-daughter relationships. The speaker herself is a mother, and her own relationship, as a biracial woman with a white mother, is consistently examined. The tone of this chapbook is set by the opening epigraph, a Facebook post about a routine eye exam gone bad when the examiner asks the examinee to look into a target, and the examinee becomes sick with fear.

In looking at her education growing up, the speaker says, “I became afraid of tyrants my country had no tyrants just freedom peace pizza and families trying to get by making money.” This combination of pizza, violence, and white-washed history threads the chapbook’s familial accounts together. The speaker talks of her parents eating pizza together, her eating it with a teenage lover, and her own consumption of it as a child and adult. “I have learned it well from you that we are a violent family and we eat pizza during wartime,” the speaker addresses her mother.

The speaker often starts from the seed of a memory (e.g. eating pizza with X) and returns to that memory, scrutinizing it from a distance. Perhaps the most memorable segment of the chapbook is a series of poems that concern the speaker’s teenage memories of dating, prom, and fighting acne. She describes her position as a “white beauty industry victim of white supremacy” who wishes she were “a regal queen like Cleopatra . . . a common desperation for many women of color.” She imagines becoming a pizza-slinging superhero in one poem and revisits her prom night in the next few: “prom dresses are for one night only but pizza is forever.” It is in revisiting this memory that she can begin to understand that she uses pizza as a coping mechanism—and accept and appreciate its consistency in her life, despite the violence of the times.

This epistolary chapbook consists of a series of letters-as-prose-poems from the author to Diego de Landa, a historical colonialist and Catholic missionary celebrated in Spanish history for the information he relayed to his home country about Mayan culture. Dominguez criticizes and fights this celebration—though his relationship with Diego is complex. They move between being pen pals, enemies, surrogate father and son, cross-temporal lovers—it’s complicated.

There is a certain hopelessness penetrating these letters—after all, their recipient cannot realistically write back. Desgraciado, in some ways, evokes John Berryman’s “Homage to Mistress Bradstreet,” wherein the twentieth century poet attempts to seduce America’s first published poet, Anne Bradstreet, in a trans-historical endeavor to colonize her body. Berryman goes as far as to assume the voice of Bradstreet, whereas the speaker only suggests Diego, at one point, is able to return his communication, though not through language and not with Dominguez adopting his oppressor’s voice. The speaker has a complicated relationship with language, being a poet who writes in English, avoiding Spanish—Diego’s imported, tyrannical language. “Spanish was transmitted with violence; my blood recalls trauma and anxiety spreads to my pupils when speaking the tongue.” Language, body, and land are inseparable in this chapbook. Yet because of his body, the speaker is expected to speak Spanish, despite his consistent rebellion from that assumption. “My tongue is my enemy. My tongue is my body. My tongue is my refugee my tongue is my home.” Blood and ink are connected through language, through the body, and the chapbook evokes blood as ink, ancestry, identity throughout its letters.

The chapbook’s consistent difficulties with their relationship to language is contradicted by the fact that poetry is made of words, a hypocrisy the speaker (and the poet) are constantly aware of—and this is only one aspect of the speaker’s daily trauma. “What sleeps in the violence we don’t address?” he asks Diego. Diego does not, cannot, answer Dominguez’s questions, but that does not—cannot, will not—prevent him from asking.

Andrea Lawlor sets up Position Papers like it were a selection of scattered papers from a utopian instruction manual, each numbered and out of order, collected together to make this chapbook. Anyone who’s ever been assigned to create their own ideal nation will find something familiar in this work, which addresses regulations for fashion, taxes, cars, property, and more. The regulations set up in the poems here exist so that a certain level of control will disseminate into more freedom for all.

In “the new country” or “my country”—the speaker has various ways of referring to the post-Capitalist country that the papers evoke—Capitalism is an enemy: “We immigrants will try not to worry about the children’s game of cash register.” Environmentalism is prized, and property is communal. All jobs are staffed with “fairly-compensated workers with collective bargaining rights” and consist of titles like sorters, menders, collectors, eaters, planters, filmmakers, members of a variety of different collectives—the trees collective, the desserts collective, and the ease-of-mind collective—among others.

The objective language that Lawlor uses to describe the speaker’s utopia is interspersed with more beautiful sentences. Though, the beauty the chapbook is most interested in is that of the utopia itself, not necessarily the beauty of its descriptive language, and the chapbook’s best moments are where those meet: “From saplings’ delicate limbs we will dangle our friend requests, and around the magnolia gnarls we will tie with ribbons the notices of our name-changes and new pronouns.”