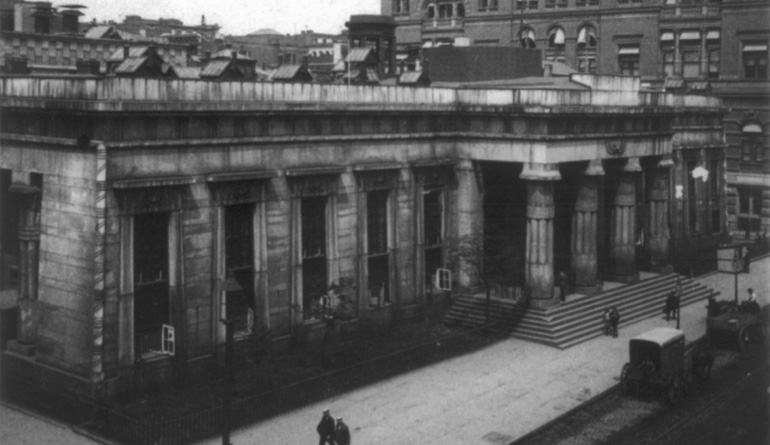 Throwback Thursday is a series that highlights classic texts commonly assigned to students that deserve to be revisited and reconsidered in adulthood. This month’s selection is Bartleby, the Scrivener by Herman Melville.

Herman Melville is arguably one of the most identifiably American authors of the nineteenth century; that legacy exists, in great part, because of Moby Dick’s presence on lists for grade-school required reading. An even split of people polled would say that they had in fact read the massive tome they’d been assigned, though most likely the other half would just admit that they were really good at reading Spark Notes. Melville’s legacy, however, extends far beyond that seminal text which may or may not have been read in school. And that legacy includes Bartleby, the Scrivener, a story that’s vastly shorter than Moby-Dick but packs a walloping message that still resonates.

Bartleby is narrated by a lawyer in New York City, and centers on his decision to hire an additional scrivener—clerks who transcribe legal documents—to his existing team of two. After living up to the standards of his employer for a period of time, the new hire, Bartleby, begins to answer every request with one simple yet startling response: “I would prefer not to.”

This retort soon devolves into a de facto sit-in: Bartleby moves into the office, and when he won’t leave, the lawyer moves his practice to a new location. But Bartleby remains, sitting on the stoop until he’s taken into police custody. Bystanders attribute his disobedience to over-exposure to humanity after working a job in the dead-letter office, but the subtext sings a story of being fed up with the demands of capitalism. In police custody, he still refuses to do as he’s told, and the story ends the only way it can: with Bartleby depriving himself of food and coming to his untimely demise.

Though Bartleby, the Scrivener was published in 1853 and therefore documents a world that’s vastly different from the one we now inhabit, it’s a strangely prescient text. The words and situations may be dated, but the sentiment pulsing below the prose feels familiar insofar as it’s a horror story you’d expect to hear in our era of modernity, the email-and-internet-driven present that requires a person to always be on. And that’s why it’s worth having a second read—though there’s a discomfort in seeing someone suffer for breaking the rules, there’s also a resonance for those experiencing white-collar alienation, and a morbid satisfaction to be derived from watching someone take the action that you always think about taking. The passive resistance is impractical, yet riveting.

From 2011 to 2012, the story served as an explainer of sorts for the actions of Occupy Wall Street; many attributed the stalwart refusal to fall in line as an inspiration, or a logical extension of the gap in reasoning between the 99% and the fifteen. But in 2016, there’s something to be said about the guts required to completely disconnect and disobey.

The infinite amount of technological advancements, high social expectations, and sheer amount of information we’re surrounded by is very real, and often very hard to remove ourselves from. The resulting fatigue that comes from doing your best all the time is very real. In some ways, Bartleby represents the ultimate existential question: if you do not tell yourself that you have to continue on doing the things that you believe you are expected to do, what reason do you have to carry on with them?

I’m not saying that Bartleby is the answer to all today’s social ailments. But the feeling of cheering someone on even though you know that there is virtually no way things can end well is rooted not in self-loathing but rather in a desire to act with thoughtfulness and purpose, and not become a cog in a machine simply because you’re expected to. And while it’s not a guide to how to escape that machine, it’s certainly a reminder of the structures that are set up that don’t allow us to act in the way that Bartleby does.

That being said, there’s an immense amount of value to be had in thinking like Bartleby for a little while. It’s amazing how much can be understood about one’s motivations and the motivations of others by simply thinking through what would happen if one party chose not to do anything at all. Even if it’s just something we consider for the amount of time that it takes to read this brilliant story, it’s a worthwhile thought exercise indeed.