Home
»
Reading
»
Virtue and Liberation: The Literary Battle for the Mind of the American Mill Girl 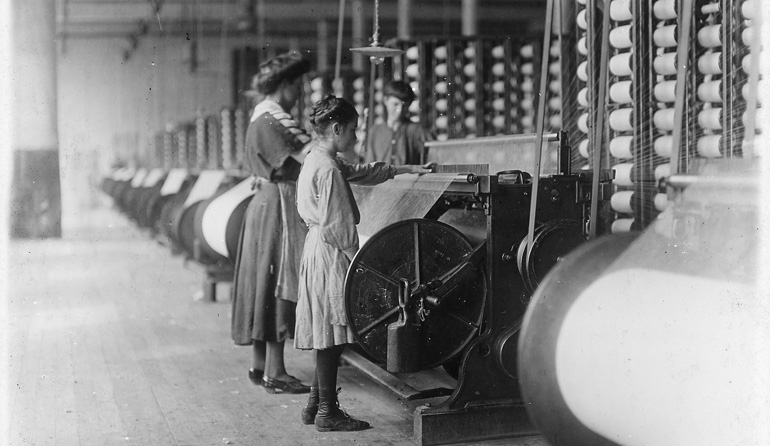 In 2014, Horace Engdahl, judge for the Nobel Prize for Literature, decried the hollow transgressiveness of the Western novel: “Previously, writers would work as taxi drivers, clerks, secretaries, and waiters to make a living. Samuel Beckett and many others lived like this. It was hard—but they fed themselves, from a literary perspective.” Engdahl attributes the toothlessness of the Western novel to the professionalization of the writing class; through grants, university appointments, residencies, or inherited wealth, many writers are able to cobble together enough of a living to avoid the real work most Americans do.

Of course, the hard-won right to make a living from the labor of writing is elusive for most American writers. But Engdahl speaks to a larger problem in the American novel since the last half of the twentieth century: work, and the psychological impacts of work, are rarely represented in fiction. Despite this, America has a rich literary history of labor narratives, particularly in the case of female writers, dating as far back as the mid-nineteenth century.

As the United States was industrializing, many young women moved en masse from rural communities to developing urban industrial centers—most notoriously Lowell, Massachusetts— where they obtained jobs and relative economic freedom working as operators at textile mills. This large-scale immigration of young, unmarried women—often unsupervised for the first time in their lives—resulted in a concomitant concern about preserving these girls’ moral and sexual virtue. Mill owners and local clergy determined that the best way to keep a mill girl docile and pure was to stimulate her mind through lectures, readings, and literary publications.

The Lowell Offering, the first penny pamphlet to come out of the mill girl milieu, was produced by factory owners, but contained writing for and by the mill girls. From 1840 to 1845, the Lowell mill girls penned poems, stories, and essays, often imitating the popular romantic literary style, that painted a rosy picture not just of life in the mills, but of mill work itself, as in “Contentment” by Dorothea, dated December 1840:

The subjects for pleasurable contemplation, while attending to our work, are numerous and various. Who can closely examine all the movements of the complicated curious machinery, and not be led to the reflection that the mind is boundless, and is destined to rise higher and higher still.

Other articles extolled the beauty of imagined flower gardens, remembered rural pastorals of homelands, or delighted in the virtue of being able to support family members on mill income.

Despite its wholly pro-capitalist bend, the Offering, as well as the lectures and readings organized by mill owners, established the earliest forums for female working class intellectuals. By the end of the nineteenth century, industrialization and urbanization had led to higher literacy rates among women, as well as the largest readership for fiction in the United States’s history. In the pages of the Offering, the discontentment of most mill girls with their long hours and poor living conditions was clear, though articles often took on a defensive formulation: critics may say that mill girls are unhappy, but the unhappiness is all in their minds.

By 1845, these discontented women had a new outlet, the Voice of Industry, a penny pamphlet overseen by the first female union in the United States. More concerned with the pressing social issues of the time, the Voice’s authors were not afraid to portray the reality of mill life in the grittiest manner possible, and they were also not afraid to take down the Offering’s oversimplified celebration of a docile, virtuous, and capitalist intellectualism. In December 1847, the Voice’s editors wrote:

These lovers of the Romance of Labor—they don’t like the reality very well—see not the pale and emaciated ones. They see not those who wear Consumption’s hectic flush. They think little of the weariness and pain of those, fair forms, as they stand there, at the loom and spindle, thirteen long hours, each day!

The Voice was an undeniably better organizing tool than the Offering, and throughout the three years it was published, it helped mobilize female workers to fight for the issues important to them and their vision of the country, including shorter work days and weeks, higher wages, the abolition of slavery, opposition to the Mexican-American War, and women’s rights. The publication also tackled the life of the mind, equating the Offering’s romantic individualism with an impotent intellectualism contrary to the collective power of working class narratives. By portraying mill life in solely romantic terms, Offering writers were creating literary art in service to capitalism; it was only through unadorned social realism that true proletarian intellectualism could seize power.

The aesthetic dichotomy between the Offering and the Voice offers a historical basis for a problem put forth by Engdahl. Unlike other literary movements, American social realism is tied to a particular class and political struggle—the working class’s attempts to organize against the unmitigated power of early industrialism. As realism gave way to modernism in the early twentieth century, the life of the mind, once highlighted in romantic terms in the Offering, became prioritized over the material conditions featured in the realist Voice. Writers from upper class backgrounds, like Gertrude Stein, William Faulkner, and F. Scott Fitzgerald, were better able to transcend their material conditions to delve deep into the psyche, often at the sake of portrayals of work.

What Engdahl fails to note is how the changing landscape of work wrought by deindustrialization and the country’s shift to technocratic work, the internet, and the rise of the gig economy has generated a new insecurity among many working people, including writers. As the income gap widens between the wealthiest and poorest Americans, the very university appointments, fellowships, and grants that subsidize the lucky few give way to interminable adjuncting positions, job instability, and a lack of healthcare or guaranteed income. Despite this, the portrayal of work, particularly in the historically and socially politicized realm of female labor, remains rich and relatively untrodden literary territory.

Tags:Horace Engdahl, The Lowell Offering, The Voice of Industry