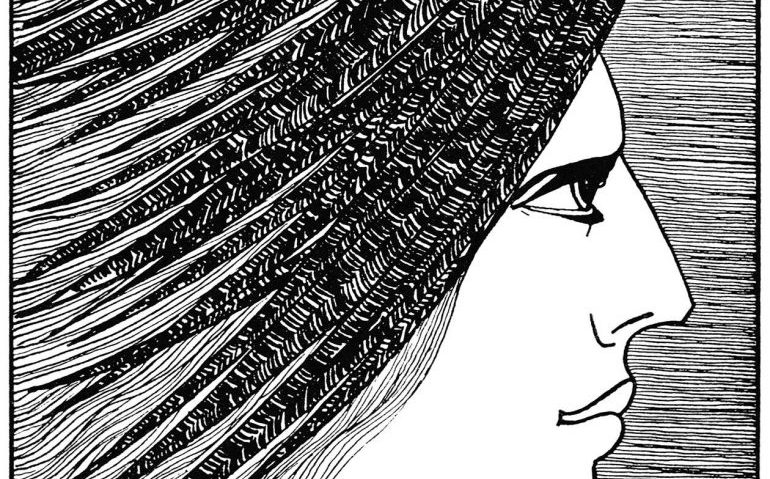 Last week my friend’s mother died, with brutal speed, of cancer. Ten years ago, my father died of a neurological disease so drawn out and cruel that we all wished for its end. Parents die, usually before their children, and 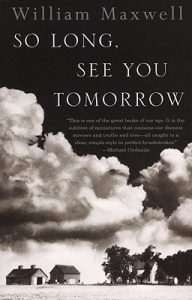 so both of these deaths were inevitable in one way or another. But as the narrator of William Maxwell’s novella, So Long, See You Tomorrow, says of his mother’s death, “the idea that kept recurring to me…was that I had inadvertently walked through a door that I shouldn’t have gone through and couldn’t get back to the place I hadn’t meant to leave.”

The narrator is ten when his mother dies of influenza during the epidemic of 1918. It’s an event from Maxwell’s own life. The story of her death is told in chapter two, and the narrator is defined by it. His father and older brother are distant and never speak to him about their shared loss. The book is ostensibly about a lurid murder that occurred in the narrator’s town, committed by the father of a boy he once knew. But his mother’s death permeates the novella. He spends half the book imagining the story of the crime, but in the final chapter we find him lying on an analyst’s couch.

I relived that night pacing, with my arm around my father’s waist. From the living room into the front hall, then, turning, past the grandfather’s clock and on into the library, and from the library into the living room. From the library into the dining room, where my mother lay in her coffin. Together we stood looking down at her. I meant to say to the fatherly man who was not my father, the elderly Viennese, another exile, with thick glasses and a Germanic accent, I meant to say I couldn’t bear it, but what came out of my mouth was “I can’t bear it.” This statement was followed by a flood of tears such as I hadn’t ever known before, not even in my childhood.

I’m not inclined to rank grief, but I think most would agree that it’s more devastating to lose a parent at age ten than as an adult, and this kind of early loss is often depicted in fiction. That’s why Claire Messud’s The Woman Upstairs struck me as unusual. (Claire Messud and James Wood are the guest editors of our forthcoming Summer 2016 issue.) Nora, the narrator, is thirty-five when her mother dies of amyotrophic lateral sclerosis. Like Maxwell’s book, Messud’s is ostensibly about events other than her mother’s death, and yet her mother’s death is on page one.

I’m over forty fucking years old, and I’m good at my job and I’m great with kids and I held my mother’s hand when she died, after four years of holding her hand while she was dying, and I speak to my father every day on the telephone… 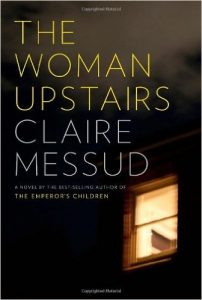 She’s haunted, not only by her mother’s slow, horrible death, but also by her mother’s regrets. During one flashback, before her illness, her mother is “felled” by the words she finds inside her fortune cookie: “It is what you haven’t done that will torment you.”

As I read The Woman Upstairs, I felt that here, at last, was a book that gave appropriate weight to the death of a parent who was neither shockingly young nor elderly. Nora’s choices in the timeline of the book are driven by her loss, and looking back on the events of the story several years later, she knows it.

My mother was only two years dead, that fall. It felt like an immense distance then, but now, in time’s accordion folds, the two events—my mother, unable even to move her head, wheezing in her elephantine breathing machine, sliding her eyes to the light, then closing them a final time; Reza at the supermarket, leaning over the bench to laugh at my spilled apples (who has upset the apple cart? I have, I have!)— seem almost contiguous.

In both of these books, the mother’s death serves as what writer and teacher Michelle Hoover (giving credit to Josh Weil) calls the “Wounding Event…a traumatic moment in the character’s life that often far precedes the story’s present.”

The “wounding event” is the event that sets the character’s most significant flaws and fears into place, the event that essentially sets the character into place. Wherever it appears in fiction (if it appears explicitly at all), it often determines the “incidents” in the story’s present that will most resonate. The protagonist’s mask is forcedly removed. He or she stands naked before us. It is in this nakedness that we recognize both the character’s particular humanity as well as our own.

The narrator of Maxwell’s book is emotionally naked, crying on his analyst’s couch, finally speaking the truth. Nora’s eventual nakedness is literal.

In Maxwell’s second novel, They Came Like Swallows, published in 1937, his mother’s death is the main plot event. Fifty years later, he wrote in a new introduction, “I have dealt, in one partly autobiographical novel or another and in short stories, with the disaster that overtook our family in the year 1918.” He recalled his final days of working on the early novel.

Much of the time I walked the floor, framing sentences in my mind and then brushing the tears away with my hand so I could see the typewriter keys. I was weeping, I think, both for what happened—for I could not write about my mother’s death without reliving it—and for events that took place only in my imagination. I don’t suppose I was entirely sane.

So Long, See You Tomorrow was published more than forty years after They Came Like Swallows. I could find it discouraging that Maxwell spent so many years and words going over his mother’s death. But I like the idea of him making his adjustments and rearrangements, finding a different sort of truth in each exploration, finishing, and then realizing he might be able to uncover something new by trying the story again with a different approach. Most of the fiction I write is about my dad’s death, even when the dad in the story stays alive. I don’t suppose it’s entirely sane, but it helps me, and the work of writers like Messud and Maxwell helps me, and in my wildest dreams, my work will help those who read it, too.