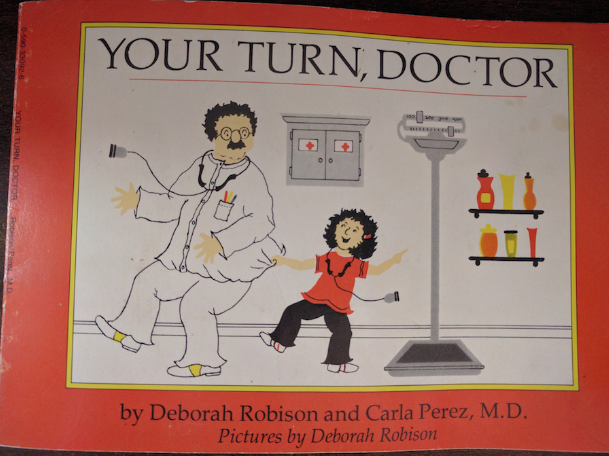 There isn’t much that will make you more aware of a book’s message, and leerier of it, than reading it aloud to a child. Maybe this explains why I seem to have discovered books with such inordinately terrible messages during the three-plus years I’ve been reading to my daughter. There’s the book about the witless-looking big-eyed bunny that peeks suggestively over its plump bottom. There’s the ubiquitous book (we somehow have two copies) about the beautiful fish with rainbow-colored scales, which purports to have a “message about sharing,” and traces the decision of this fish to give away his uniquely beautiful scales, one by one, so that the other fish will like him. And the terrifying, now out of print book from the 80s, Your Turn, Doctor, that we discovered in some forgotten trove. Ostensibly meant to help children overcome their fears of doctor visits, this one, I truly think, must actually have been written to mess with us. Little Gloria is dreading her checkup and fantasizes about giving the doctor a checkup instead; in the daydream that then unfolds, she chases the doctor in all his almost-naked, middle-aged, pudgy glory around the examining room, saying truly unbelievable things. “You don’t have to be shy with me.” “Wider, Doctor, wider. I want to see everything.”

My daughter wants to finish most books we start. I can shift pretty fast into invention-and-skipping mode, though she seems to suspect something’s up.

Message is tricky in longer fiction, too. As readers and as writers, I think we’re taught to be wary of it, of turning characters and story into vehicles for a position. Maybe because characters and story are supposed to be more complicated than most positions are. The sense is that slogans constrain, and expansiveness—empathy, engagement, unexpected connection and reach—is one of fiction’s best gifts. Books like Animal Farm, The Jungle, Uncle Tom’s Cabin, Pilgrim’s Progress, Brave New World are considered allegory, a slightly different category of thing from deep, rich literature. Their worth is determined by the legacy of the ideas they embody, and discussions of their fictional elements quickly morph into discussions of those ideas.

Yet I’m thinking of my experience with The Lion, the Witch, and the Wardrobe series when I was a kid. I read those books and loved them—was utterly pulled in by the characters, gutsy Lucy and flawed Edmund and heroic Peter and virtuous Susan, and especially by the idea of a hidden, magical world suddenly opening—without the Christian allegory ever once clicking. (I am lucky that while my mother is a Presbyterian minister, she would never in a million years have intervened in this ignorance.) I loved these books the way I would have loved any good books. The characters were real to me, and it wouldn’t have occurred to me to look beyond them for their meanings. I could see that the lion Aslan was unusually good, noble, and self-sacrificing, but I didn’t read these traits as arrows pointing elsewhere. Not in a direct way, at least. I did recognize these qualities in other people in my life—recognized them better, in fact, after having met them again in this new way. This kind of more expansive, flexible connection, which is part of what all good fiction is after, is what C.S. Lewis achieved, for me.

I think, too, of Animal Farm, which I taught to 9th-graders for years—and which wore on me much less than I would have expected. Every year a few students were at first mostly interested in boiling the book down, mapping its characters onto their corresponding historical figures and groups. But after a little while I think most of them came to see that the question “Who is Boxer?” isn’t fully answered by saying “Boxer represents the proletariat.” Any satisfying answer, I think, must encompass the feelings the reader develops for Boxer, the very particular horse Orwell gives us to love—his innocence, his stubborn belief, his nobility in the face of being used. That heartbreaking scene in which he’s carted off to the knacker’s, trying in vain to kick his way out of the van, his enormous strength all used up in working for the good of the corrupt farm.

The other moment from this book that lingers vividly in my mind comes near the end. The heart of the farm, for all the years since the animals overthrew their farmer, has been one idea: “Four legs good, two legs bad.” Now comes a horrific new development.

It was a pig walking on his hind legs.

Yes, it was Squealer. A little awkwardly, as though not quite used to supporting his considerable bulk in that position, but with perfect balance, he was strolling across the yard. And a moment later, out from the door of the farmhouse came a long file of pigs, all walking on their hind legs […] out came Napoleon himself, majestically upright, casting haughty glances from side to side, and with his dogs gambolling round him.

He carried a whip in his trotter.

Certainly the allegorical message here, about the transformation of communist leaders into dictators, is an important one. But that message isn’t, for me, the whole key to the moment’s effectiveness. Instead, image and rhythm—fiction’s usual lifeblood—make the revelation striking. This moment has the direct connection Orwell intended, but also broader connections to betrayal in all its forms.

In Orwell’s essay “Why I Write,” he sets forth four possible authorial motives: sheer egoism, esthetic enthusiasm, historical impulse, and political purpose. Had he lived in a different time, he tells us, the first three motives would for him have eclipsed the fourth. Because of the political desperation of his era, though, political purpose became his main drive. But there’s an interesting passage a little later on in the essay:

When I sit down to write a book, I do not say to myself, ‘I am going to produce a work of art.’ I write it because there is some lie that I want to expose, some fact to which I want to draw attention, and my initial concern is to get a hearing. But I could not do the work of writing a book, or even a long magazine article, if it were not also an esthetic experience.

Maybe that’s the heart of it. Ideas aren’t anathema to good fiction; good fiction requires them, in some form. Show, don’t tell is a good and useful rule, but both showing and telling, after all, require having something to say.

Yet I think it’s also true that aesthetic experiences are unruly. They turn out to have minds of their own. And when it’s good, fiction sometimes expands beyond even our own intentions for it.