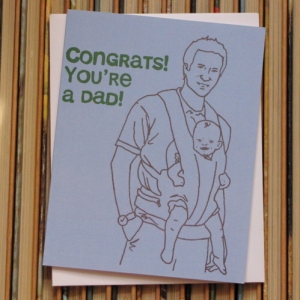 Last week I brought my eleven-month-old baby girl to the Family Center, a small, slightly hippy-ish gathering place for kids and parents. My wife and I had been there briefly the week before to check it out, but this would be our daughter’s first time there to play and interact with the other little ones, and it was just her and me this time.

The woman who runs the place was standing behind the counter of a kind of makeshift coffee bar.

I stopped, confused. The woman looked up, a strange surprised expression on her face. We remained there in silence for an interminable second-and-a-half. Then she said in a voice that reminded me of a person pressing a foot down to test the solidity of lake-top ice, “Is… she… working?”

I told her yes, that it was my morning with the baby, and we proceeded to have a very pleasant conversation, neither of us acknowledging that she had just called me “Mommy.”

A couple days later I found myself walking the aisles of a Babies-R-Us store to pick up a few supplies for an upcoming trip. If you’ve never been in a Babies-R-Us, you can still imagine the place: baby clothes, nursery furniture, strollers, toys. None of this is surprising. Also not surprising are the marketing strategies employed by the manufacturers of these products. Mothers and children grace the packaging for just about everything. Aside from the Baby Bjorn and a couple of diaper bags that are specifically made to not look like diaper bags, there is nary a father to be found.

I was carrying my daughter and began to detect a certain heaviness in her pants. Telltale sign. I found a stock person and asked directions to a restroom with a changing table. “Yeah,” the kid said, “there’s the… um… changing room just down there.”

The door was open and I could see a nicely appointed little space: a good, solid changing table and two loveseats. Then I saw why the kid had hesitated in giving directions. This was not the “Changing Room” or the “Family Room,” but the Mother’s Room. Said so right there on the door. I stopped momentarily at the threshold, feeling like an interloper.

We got home that day to find a copy of Parents magazine (which just started showing up each month after our baby was born) in the mailbox. As I fed my girl that afternoon I flipped through the issue and found, as expected, loads of pictures of women with their children, but not one image of a man. Well, to be fair the hand holding the mug in that coffee ad did look a little hairy—but other than that…

One full-page ad had a picture of an adorable child, about a year old. I held the page up for my daughter to see and said, “See the baby?” She went bonkers, her face alit with delight and her arms waving about excitedly. But why? The picture, I believe, offered her a sort of reflection of herself, an acknowledgment of her condition. In a way, I think it confirmed for her that she exists.

Now, I’m not one of those “men’s liberation” guys who goes around decrying the reduced state of masculinity in American society. As far as I can see, men are still doing pretty well. But I will say that in the realm of parenting I have occasionally found myself feeling, let’s say, unacknowledged.

And it is too often the same in books. While there are plenty of depictions of men in books, when I look at some of my favorites, I’m taken aback at the small role fatherhood takes in their lives. Domesticity, in both life and literature, has been regarded as the purview of women. Women take care of the little ones while men adventure through the world, unencumbered by the anchors of home life. And while this can make for wonderful stories, it also leaves a hole in our cultural understanding of fatherhood.

Luckily, I’ve been able to take comfort in a few richly drawn father characters that buck the convention. They aren’t all perfect dads, but they are memorable in large part for their identity as fathers. And with Fathers’ Day just behind us, I thought I’d share my favorites literary dads, with passages from each: 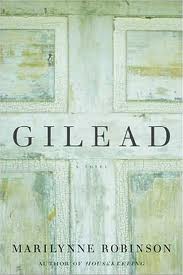 This epistolary novel has elderly Reverend Ames of Gilead, Iowa writing to his seven-year-old son. In a time when everyone in the writing world seems to be talking about ways to incorporate elements of genre fiction into their literary work to make it more exciting, Robinson writes books of quiet, lyric beauty. Though he and his forebears have been through war and scandal and betrayal and tragedy, Reverend Ames’ focus is on his love of God, family, and community.

I can tell you this, that if I’d married some rosy dame and she had given me ten children and they had each given me ten grandchildren, I’d leave them all, on Christmas Eve, on the coldest night of the world, and walk a thousand miles just for the sight of your face, your mother’s face. And if I never found you, my comfort would be in that hope, my lonely and singular hope, which could not exist in the whole of Creation except in my heart and the heart of the Lord. That is just a way of saying that I could never thank God sufficiently for the splendor He has hidden from the world – your mother excepted, of course – and revealed to me in your sweetly ordinary face. 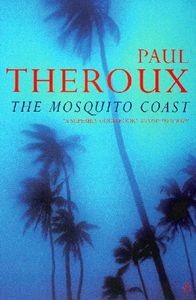 Allie Fox, from The Mosquito Coast by Paul Theroux.

Fox is obsessed with the downfall of Western civilization—not with causing it, but with its imminent inevitability. So in advance of the “war” coming to the United States, he moves his wife and children to the wilds of Honduras. An inventor with Ahab-like determination, he seeks to perfect their jungle home, perils be damned.

I did not doubt that he would succeed. I had never known him to fail. People sometimes misunderstood Father, because he frowned when he joked and he laughed when he was serious…But those of us who knew him never doubted him. If there was one thing Father did not know, it was this: he did not need to prove himself to us.

The Man, from The Road by Cormac McCarthy.

A father? Try the father. The man takes his boy southward on an ash-covered road, scavenging for food, running from and fighting off cannibalistic marauders. He has one purpose: protect the boy. It’s one of those books that makes me rethink everything I’ve ever written, and feel a little bad about how frivolous it all seems.

Can I ask you something, [the boy] said.
Yes. Of course.
Are we going to die?
Sometime. Not now.
And we’re still going south?
Yes.
So we’ll be warm.
Yes.
Okay.
Okay what?
Nothing. Just okay.
Go to sleep.
Okay.
I’m going to blow out the lamp. Is that okay?
Yes. That’s okay.
And then later in the darkness: Can I ask you something?
Yes. Of course you can.
What would you do if I died?
If you died I would want to die too.
So you could be with me?
Yes. So I could be with you.
Okay. 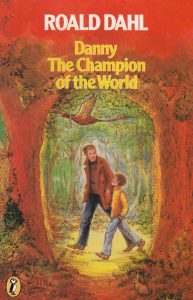 William, from Danny the Champion of the World by Roald Dahl.

This was one of my favorite books as a child, and now I find it no wonder that father-son relationships have become such a prominent theme in my own writing. In this story, William is a single father raising Danny, in a gypsy caravan behind a filling station in the English countryside. While never ceasing to be Danny’s father, William also manages to be the boy’s best friend, and they have a wonderful adventure wherein they drug pheasants with sleeping pills.

While I was still a baby, my father washed me and fed me and changed my diapers and did all the millions of other things a mother normally does for a child. That is not an easy task for a man, especially when he has to earn his living at the same time by repairing automobile engines and serving customers gasoline. But my father didn’t seem to mind. I think all the love he had felt for my mother when she was alive he now lavished upon me.

How about you, readers? What are some of the father characters you remember best?