In our Writing Lessons series, writing students will discuss lessons learned, epiphanies about craft, and the challenges of studying writing. This week, we hear from Miranda K. Pennington, a student in the MFA program at Columbia University. You can follow Miranda @MirandaKPinNYC. —Andrew Ladd, Blog Editor 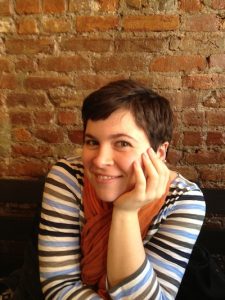 Whenever I’m in search of “Writing Lessons,” I always turn to the Brontës. Charlotte, Branwell, Emily, and Anne wrote together as children, creating fantastical worlds, Angria and Gondal, where larger than life heroes and villains crossed swords, matched wits, and broke hearts. Many of their later poems and stories were drawn from these civilizations.

In Charlotte’s first attempt at a novel, she began with a masculine narrator, as she had always done in her juvenile fiction. But publisher after publisher read The Professor and found it wanting—as Juliet Barker puts it, “[u]nable to write convincingly as a man, Charlotte retreated behind the comforting familiarity of the sarcastic and frequently flippant shell.” What The Professor lacked was sincerity, passion, and authenticity. When Charlotte began work on Jane Eyre, she incorporated events from her own life—her troubled years at Cowan Bridge school, an unrequited passion for a married mentor—and the resulting novel connected with the reading public like a gut punch.

I arrived at Columbia’s MFA program reliant on tools that had served me well as a critic and blogger—observations, pop culture and social criticism, and the superpower of sarcasm. The only part of the MFA application process that scared me was the part that asked for submissions “of literary quality,” which to me meant “sincere.” Expressions of genuine feeling make uncomfortable. I had no faith that my personal experience at then-25 was relevant to anyone besides myself, so I hoped my satirical skills would keep insufferable memoir at bay.

But then professor after professor, classmate after classmate around the workshop table, would finish an essay from me and ask “What is this really about?” Shrewd readers all, my colleagues and teachers could tell that behind each comic essay was someone trying to camouflage the vulnerability she felt, hiding the story she really wanted to tell.

My literary breakthrough came after I’d spent a semester reading about the Brontës and tracking my development as a reader and writer alongside their work. I wrote unironically, with enthusiasm and heart, eager to share my love of these sisters, their underappreciated works, and my gratitude for what they’d shown me as writers. A ten page research essay grew to twenty pages, then forty. And now, instead of a collection of humor essays with a few personal recollections shoehorned in, my thesis is a book about my life with the Brontës. To write it, I had to let my defenses down and trust that the Brontës would see me through. I had to write what I believed in and not just what I thought people would accept from me.

Charlotte Brontë eventually waded through her depression and loss and frustration to write Villette, where she proved you could have an embittered, sarcastic narrator and secure the sympathy of your audience. But she couldn’t do it until she’d figured out why and how The Professor failed. Now I know I can be both funny and literary. I just have to be honest first.