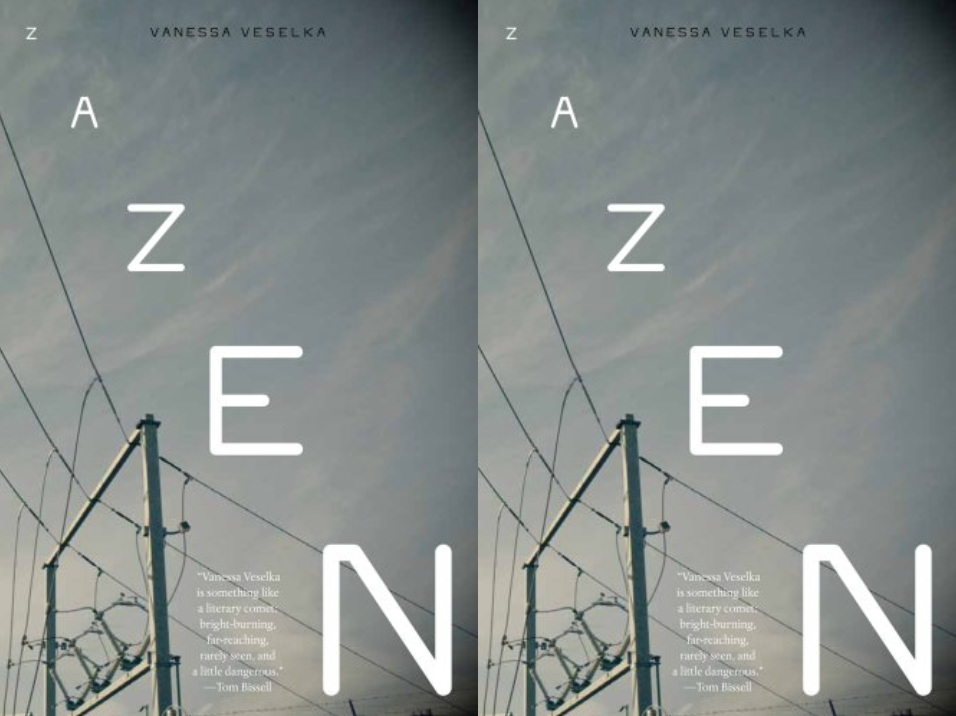 With the anniversary of the September 11 attacks just a few days past, Zazen isn’t the comforting book you might be seeking. But it is a book that could not have been written in an earlier time because the legacy of those attacks, the ensuing war, and our current financial conundrum reverberate throughout its pages. First-time author Vanessa Veselka is not trying to bum you out, however; she’s looking at a not-so-distant future, where the world is at war and corporations and religion have converged to overtake American culture, and trying to offer a path to survival.

Her main character, former palaeontologist Della Mylinek, drifts through her days as a waitress at a local vegan diner, drawing maps of a disappeared landscape on which she pinpoints self-immolations. She too might be burning alive, haunted as she is by her past breakdown and her sister Cady’s sudden death in a bus crash. Della tries to muster anger at the dissolute society around her, but rebellion is futile; neither sex parties nor yoga stretches will save her and her friends. Their vibrant counter-culture only fiddles with kindling as the world ignites, first with bomb threats then with actual bombs.

Della herself takes to calling in threats to the gutted public library and the local mall church, KGOD radio. She doesn’t wish anyone real harm; she’s just tired of wincing in anticipation of the world’s next blow. When bombs begin to ignite—without her help—she is tempted to run away, like her friend Jimmy and so many others, to Honduras and other eco-tourist destinations where first-worlders run to escape.

We’re all familiar with that temptation to run away in the face of bad news, but Veselka challenges her heroine’s escapist tendencies—and forces readers to confront their own. She offers up a world only a shade darker than the one currently around us and asks us to find hope in the shadows, her prose as acid and bleak as the world she depicts, but laced with the wit and irony necessary for survival. She continues to search for glimmers of a better world in the shell she has been left with. We too should keep looking for the hints of hope, so we don’t succumb to the undertow.

The new-era publishing venture Red Lemonade offers free PDFs of the book’s chapters or the chance to buy a hard copy at http://redlemona.de/vanessa-veselka/zazen.