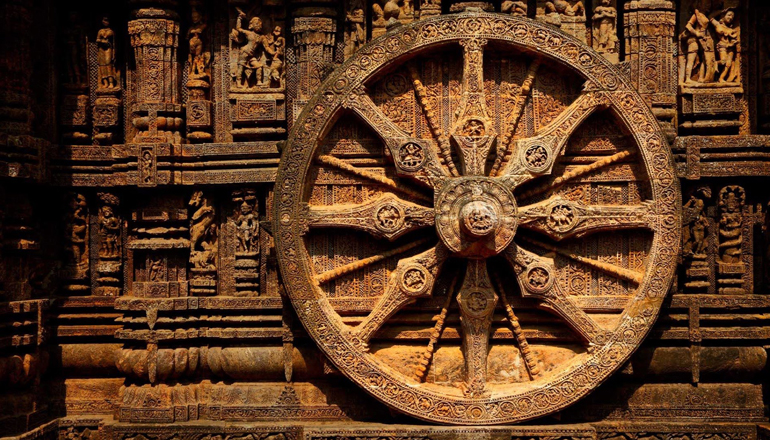 –Rabindranath Tagore, on the Sun Temple at Konarak.

His voice a thin radio rasp, Neil Armstrong coaches Buzz Aldrin down the ladder of the Lunar Module. “It’s about a three footer,” he says of that last step to the chalky surface below. The second man on the moon leaps from the final rung and lands buoyantly, turning slowly from the LEM to take in a new world. He arches his back, pointing the blank face of his helmet upward to the stars.

Aldrin pauses before responding, perhaps sensing that, despite the 600 million viewers back home, he is profoundly alone. “Magnificent desolation,” he finally proclaims.

“Two men from the planet Earth landed on the surface of the moon at 4:17:45 E.D.T., Sunday, July 20th, 1969,” the front page of the Boston Globe reports the next day below a black and white photograph of the men, blurry and indistinct, holding up an American flag in front of a background of pure blackness.

Thirty years later to the week, the Globe celebrates the anniversary by sharing several Bostonians’ memories of the landing, but not everyone beheld the event warmly. “It was just an awful feeling of two worlds touching,” a pastor from Cambridge recalls.

Near the back of the paper, in the Living section, the Globe hails a different arrival, that of Jhumpa Lahiri’s debut book, Interpreter of Maladies, published on June 1st, 1999. The Pulitzer Prize-winning collection features stories of “rare delicacy,” revealing displaced characters struggling for a sense of identity.

The narrator of “The Third and Final Continent,” the last of the collection’s nine stories, makes the journey from India to England and then to America, landing alone in Boston on the same day that Aldrin and Armstrong land on the moon. He compares his life to that of the Apollo 11 astronauts: “While the astronauts, heroes forever, spent mere hours on the moon, I have remained in this new world for nearly thirty years…I am not the only man to seek his fortune far from home, and certainly I am not the first…Still, there are times when it is beyond my imagination.”

In “When Mr. Pirzada Came to Dine,” the title character leaves his family in Bangladesh (then East Pakistan) in the fall of 1971 to study Botany in the U.S., only to helplessly watch on TV as his home city of Dacca becomes the cauldron for an Indo-Pakistani war. India declares war on Pakistan on December 3rd, 1971, after a series of pre-emptive airstrikes target air force bases in northwest India. Thirteen days later, Indian forces march into Dacca, and one of the shortest wars in history comes to an end.

In the collection’s title story, set in India, Mr. Kapasi holds two jobs: a private tour guide driver, and a translator between a doctor and his patients. Mrs. Das, a young Indian-American woman on vacation, employs Mr. Kapasi for a tour of the Sun Temple at Konarak, but finds his other occupation to be “romantic.” Seizing a moment alone from her family, she unburdens her woes to the tour guide. He understands that they are both afflicted with the same feeling of being profoundly alone, but he cannot find the language to heal them.

A week before Lahiri’s debut collection is published, the Globe reports on a different kind of malady afflicting area high schoolers, one that arrives with the warm weather of late spring and drains the energy from its sufferers: “The diagnosis? Senioritis.”

“I have so much work,” one patient laments, “but the [book] bags remain closed.”

Arun, a senior nearing graduation at nearby Randolph High School, exhibits no such symptoms. Last year, his family moved from Bombay to Boston, and the transition to an American High School was difficult: “I had no clue what US history was about,” he says. And as for a social life, Arun admits, “it’s completely different here…[t]he first year, I was kind of a couch potato.” Now, though, Arun has joined the soccer and tennis teams, and he is a member of a student club against racism. He is set to graduate near the top of his class and will head to Johns Hopkins in the fall.

This same week, tensions between India and Pakistan once again boil to the surface when violence in the Kashmir region erupts. Atal Bihari Vajpayee, Prime Minister of India, admonishes Pakistani officials for speaking of peace while preparing for war. “We still believe in peace,” he says, “but you cannot clap with one hand.”

As troops face off in the contested mountainous region in the north of the Indian subcontinent, a more symbolic duel between India and Pakistan unfolds on the cricket field. Fans from both sides pack in to a bar in the Jackson Heights neighborhood of Queens. “Both teams are going to fight hard,” an office supply salesman from Coney Island says, “but we are all friends here.”

Pakistan strikes first, leaving the Indian squad to regroup and counterattack. In the end, India wins 227 to 180, and the mood in the bar has soured.

“We never play like friends; we play like enemies,” a 22 year-old Pakistani-American says. “This was not a game. This is war.”