Home
»
Reading
»
Can the Language of Food Unite the World? 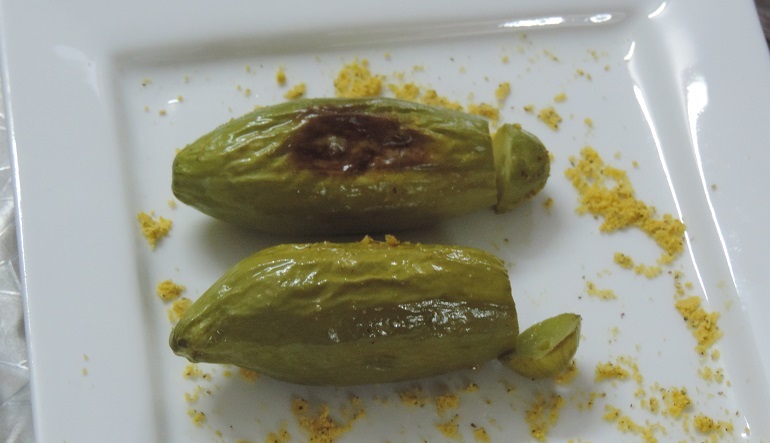 In an earlier post, I wrote about how food writers grapple with the challenge of describing taste and smell. There are many more aspects to the language used to describe food. Stanford University linguist Dan Jurafsky has written a fascinating study, The Language of Food: A Linguist Reads the Menu, covering many of these aspects. The one I find most compelling is what Jurafsky calls “EATymology.”

Etymology refers to the origin and history of words, but the language of food isn’t just a clue to the past. “The words we use to talk about food are also a code that we can decipher to better understand the present,” Jurafsky says.

In the introduction to the book, he says, “The language of food helps us understand the interconnectedness of civilizations and the vast globalization that happened, not recently, as we might think, but centuries or millennia ago, all brought together by the most basic human pursuit: finding something good to eat.”

Indeed, as a food writer and cook, I have found great similarities in the foods of the world, and one of the key indicators of the similarities is the language of food. I remember from my childhood the potoler dolma my mother cooked. Growing up in the center of India at that time, I thought the word dolma was a Bengali word. Potoler dolma is a popular dish in Bengal. Later I learned that dolma is an Arabic word and dolmas are cooked all over the world. The word dolma means “something stuffed.” Potoler dolma is pointed gourd stuffed with spiced and sautéed potato, fish, or mutton (goat meat). The dolma’s wrapper is usually vine leaves in Middle Eastern and Greek cuisines, but the “casing” can be squash, eggplant, sweet peppers, cabbage leaves, quinces, and apples—and, if I may add, potol, or pointed gourd.

And what about kedgeree? It is very similar to khichdi, a common Indian dish of rice and lentils. The word was “anglicized in the 18th century when the English added flaked smoked fish, hard-boiled eggs, and a rich cream sauce,” according to Sharon Tyler Herbst’s classic, The Food Lover’s Companion. The only difference between the Indian and European versions of the dish is the meal at which kedgeree is served: as breakfast in England; as lunch or dinner in India.

Another word that reflects the interconnectedness of civilizations is pilaf (or pulav) or paella. Essentially, the Spanish paella, Middle Eastern pilav, and the Indian pulav are the same: rice cooked with vegetables, meat, seafood, or poultry.

The origins of food words can offer up surprises. Jurafsky’s book traces the origin of “ketchup” to the Asian fish sauce, ke-tchup. “The story of ketchup is a fascinating window onto the great meetings of East and West that created foods we eat every day, telling us how sailors and merchants spent a thousand years melding the food preferences of the East and West to form our modern cuisines,” the author says.

On his blog, Language of Food, he also cites the provenance of macaroons, macarons and macaroni. The wonderful story of how macaroons, the well-known cookie, came into being shows the myriad connections between the root word and macaroons, the cookie (or biscuit); macaroni, a pasta; and macaron, the trendy Parisian macaroon. It also shows that all of these “have the same origin, rooted in the great meetings of the Islamic and Christian culinary traditions in the Middle Ages.”

You will find other examples on his blog, where he gives histories of food words that have wound their way around the world. For instance, cha or chai, which means tea. Tea has strong Asian connections, but yum cha, the Cantonese tea, now finds a place in San Francisco, where Jurafsky lives. He also describes the Burmese tea-leaf salad.

He says, “But tea is even more than a delicious beverage or refreshing salad. These tea words (tea, cha, chai, matcha, laphet) are players in an unusual linguistic story, in which two differing pronunciations of a word reflect the two ways that Europe and Asia have traded over the last 500 years: by land or by sea.”

To me, all the world’s a platter; yet, food finds itself in the throes of conflict between nations. During the war in Afghanistan, Afghan cuisine became less popular in the United States. And during the Iraq war, French fries (and French toast) were renamed as “freedom fries” at some U.S. restaurants and on the menu of the U.S. House of Representatives to protest at France’s opposition to the war. The name—the reference to France—was restored in 2006!