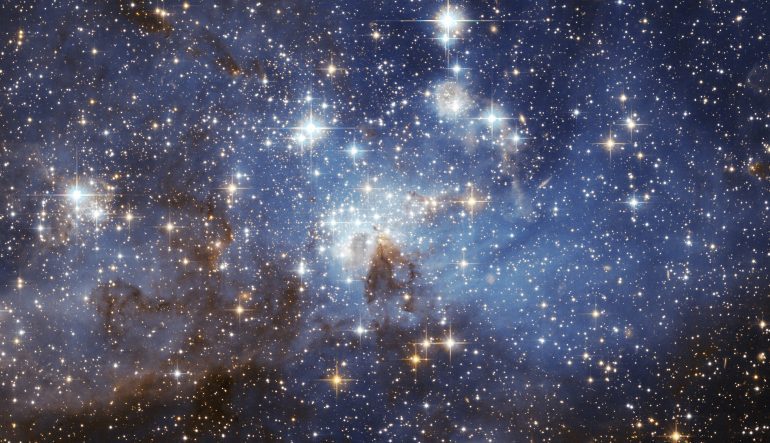 I’ve had loss on my mind lately. Not long ago, I watched footage of a Manhattan-sized glacier calving and crashing thunderously into the sea above Greenland; I hit pause several times as I sat blinking at the screen in disbelief, unable to fathom the scale of this loss. Scientists are bracing not only for a continued thawing of our polar ice caps, but also for the possibility of a “sixth extinction,” an age of unprecedented losses to our environment. With conflicts around the globe causing untold death and destruction, as well as growing rifts and political uncertainty at home in the US, I find a sense of loss palpable and ever-present.

When I stumbled upon Kanishk Tharoor’s story collection, Swimmer Among the Stars, at a book fair, it was the cover image—an elephant meandering into a midnight-blue sky etched with luminous silver stars—and the title that attracted me first, maybe because they hinted at a whimsical, magical world where the losses I have felt and feared would fall away. Tharoor’s stories did indeed deliver in whimsy and magic, but not in the way I had anticipated—they plunged directly into the theme of loss. From the folkloric to the futuristic in style, each story made loss a bit more fathomable and the people experiencing it more relatable, no matter how fanciful the plot or far-flung the setting.

Facing hardship and loss, Tharoor’s characters are torn between adapting to change and trying to hold on to things familiar and dear to them—from citizens anticipating the arrival of a marauding army at their city gates (“Tale of the Teahouse”), to a coal miner expressing the loss of dignity he felt being depicted in a photograph (“Portrait with Coal Fire”), a refugee contemplating her turn of luck in exile (“The Fall of an Eyelash”), and an elephant and its caretaker forced to leave their village and sent on an arduous journey across the ocean (“Elephant at Sea”).

In the title story, the last living speaker of a language sits down to tea with ethnographers in her remote village home as they try to coax her to speak so they can record and analyze her words. While there is a tinge of melancholy in describing her fate, we are not to pity the old woman; we can sense her inventiveness and determination in the face of her loneliness and loss. Tharoor writes: “With nobody to speak her language to, she began talking with objects, the pots and pans, a creaking door, the sharp corner of a table.” Among the words she teaches her visitors is the one “used to express a very dark kind of gratitude, to be thankful for the loss of something.” She enchants the ethnographers, singing them a wedding song, creating phrases for “astronaut” and other words where no term exists in her language, and adding a twist to the story to claim it as her own.

Tharoor blends sober realities of loss with comical interactions, particularly in “A United Nations in Space,” a story about diplomats holed up in an orbiting space hotel debating what to do after their Manhattan headquarters and some of their countries lie submerged under rising seas. Some delegates try to negotiate a solution, while some stare into the cosmos in mourning for all they have lost. Others make the most of their confinement sharing drinks, recounting stories, and dancing in zero gravity. “If everybody is grieving,” one delegate muses, “then grief loses its distinction, it just becomes a shared, permanent state.”

Tharoor’s voice has stayed with me, not only because of his imaginative stories in Swimmer Among the Stars. I also discovered his BBC radio series, Museum of Lost Objects, featuring antiquities lost to war and destruction in the Middle East. As the show’s presenter, Tharoor focuses on “those things that aren’t so easily destroyed—memories, legends, and incredible personal stories.” It is the human impact he conveys most powerfully as he chronicles loss, whether speaking about a war-ravaged villa in Aleppo converted to an emergency clinic or centuries-old Iraqi artifacts destroyed by the Islamic State. Throughout the show he weaves history and anecdotes with vivid details to bring the stories to life: the scent of jasmine from a bombed-out courtyard, sounds of a bustling alleyway, and images of a baby born amid the rubble.

There is a freshness to the language and imagery in Tharoor’s storytelling. But beyond the writer’s talents is his careful attention in depicting people as whole and narratives as multidimensional. He does so with a touch of tenderness. As the poet Mary Oliver aptly said, “Attention without feeling . . . is only a report.” I would add that attention with too much feeling can overwhelm and paralyze. Tharoor finds that balance, at just the right distance to the beating heart of the story, delving deeper than mere reporting but stopping short of exposing too much that would disillusion or traumatize the audience, or worse—numb us to the horrors.

I encountered Kanishk Tharoor’s stories at a time when I needed to find meaning in loss and context for what we have at stake in the world today. The stories reminded me of the power of empathy and connection in our shared experience and the need for imagination, even playfulness and humor, in times of adversity. The English writer Philip Pullman said: “After nourishment, shelter and companionship, stories are the thing we need most in the world”; and according to Tim O’Brien, stories save us. While I don’t think we can count on stories alone to save us, stories like these hold a small, glimmering light—they illuminate what we have to lose, perhaps embolden us to claim what is ours, and let our humanity shine.

Tags:Kanishk Tharoor, Museum of Lost Objects, Swimmer Among the Stars