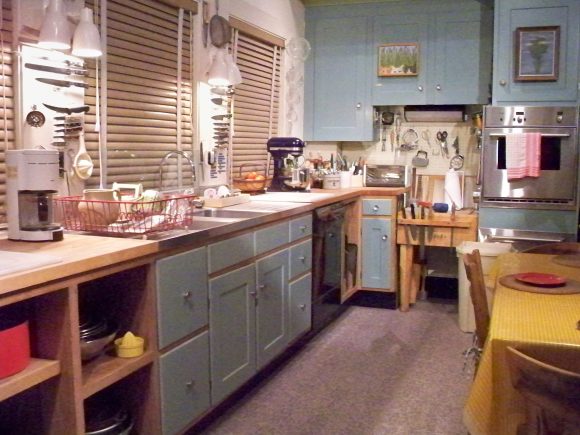 If Julia Child and Avis deVoto were here today, they’d be great Facebook friends. They’d be the kind of people who friend each other and immediately start sharing cooking tips, family photos and pretty soon everything else. Julia and Avis bonded over food—buying it, cooking it and eating it. They also had a shared enthusiasm for Julia’s passion project—a guide to mastering the art of French cooking for “servantless American cooks.” But since they were without technology, they wrote letters, which Joan Reardon later collected into a book titled As Always, Julia: The Letters of Julia Child and Avis DeVoto.

I picked up my copy after seeing the Nora Ephron film Julie & Julia that is partly about Julia’s life in Europe in the 1950s. I was hoping to read more about Julia, her life in Paris and her work on her classic cookbook. The letters provide that in quantity, but it also provides something unexpected—a glimpse into another time when American politics turned ugly as Wisconsin Senator Joseph McCarthy crusaded to ferret out alleged communists. His actions reverberated across the country and across the world. The letters reveal that amid the glamour and culture of Paris, Julia and her husband Paul could not avoid what was going on at home. The parallels to the current political climate are surprising and at times too familiar.

The correspondence began when Julia read an article by Avis’ husband, prize-winning historian Bernard DeVoto, in Harper’s complaining that a good kitchen knife was almost impossible to find. Julia decided to send him a good knife from Paris. Avis, who handled her husband’s correspondence, wrote a nice thank you letter. Soon a legendary correspondence was born. The letters are long and lively and filled with chatty bits of news, cooking tips, and gossip.

Of course they talk a great deal about food and it’s delightful. Avis bemoans the lack of fresh herbs and produce in her Cambridge Mass. markets, while Julia offers Avis tips on making mayonnaise, beurre blanc and instructions for making authentic bouillabaisse:

“To me, the telling flavor, besides the fish is the ‘Provençale base,’ which is just about always the same . . . garlic, onions, tomatoes, olive oil, fennel, saffron, thyme and bay, and usually a bit of dried orange peal. . . . Many recipes call for just water . . . but to me it ain’t good enough.”

The dearth of fresh herbs might be surprising, but the political climate they discuss feels quite contemporary. Before 2016, comments about McCarthy and other players on the national stage might have seemed like quaint historical footnotes. Now they are read with a new empathy for two American women concerned about the future of their country. The nervous way they share their feelings about the climate of fear in Washington, the frustration that GOP leaders are doing nothing to stop McCarthy and the awkward silence of the press is now quite familiar to many modern readers.

In March 1953, Avis wrote to Julia, “Spend an afternoon making marmalade while California navels are at their most perfect. And watch every morning with a kind of horrid fascination that Bastard McCarthy interrogating writers on TV.”

“I hate to think what this McCarthy thing is doing to our shreds of prestige in Europe, especially England. . . . This is a very intolerant country [emphasis DeVoto’s] Always has been. People just forget about the Father Coughlins and the Gerald E.K. Smiths and the Huey Longs, and the long line of rabble-rousers way back to the Revolution. . . . I am in a state about all of this. I comb the newspapers. I listen to the commentators. And I get into fights all over the place.”

Living overseas didn’t insulate Julia or Paul from the long arm of McCarthy and the House Un-American Activities Committee. Because Paul worked for the government it was never much out of mind as they moved from post to post across Europe. Julia writes:

“Such a horrible report of a priest’s speech today in the [New York Times], supporting McCarthy. The way they say it is only the left wingers who are against him. I really read those things and scream from the stomach.”

Later she wonders if the $25.00 she and Paul sent to the “I Believe” fund to investigate McCarthy and a strongly worded letter to Aloise Buckley (sister of William) after she attacked Smith College (Julia’s alma mater) for “harboring Communists on the faculty” could be the reason why the Central Intelligence Agency asked Paul to fly to Washington for questioning. “Think I sent you a copy of the letter, which we very much enjoyed writing,” she adds, and you can almost hear her legendary laugh.

Although Julia is known for her love of France and French cooking, her insights while she and Paul were posted in Bonn were cautiously hopeful and insightful: “I am liking the Germans,” she tells Avis, “And one thing that is exciting and fraught with hope is that it is really a new Germany. Really for the first time they are a real democracy. But my god, we have got to realize it and help them. They have the awful problem of teaching the whole population how to be a democracy… that the government is ‘me’ not ‘they.’”

As Always, Julia is filled with beautifully written recipes and conversation between like-minded friends. Both the politics and the foodie conversations are relevant to contemporary readers. Avis writes that she wrote her congressman. “I told him I was sick to the depths of my soul over his lack of moral courage. . . . And then I sent twenty-five dollars to the Liberal Citizens of Massachusetts,” she writes before turning back to their preferred diversion in perilous times, the preparation of good food:

“Woman’s Day just received,” Avis continues to brighten the mood almost like a cute kitten or inspiration poem posted on a Facebook page, “It has a quite good article about cooking potatoes 48 different ways, all French.”