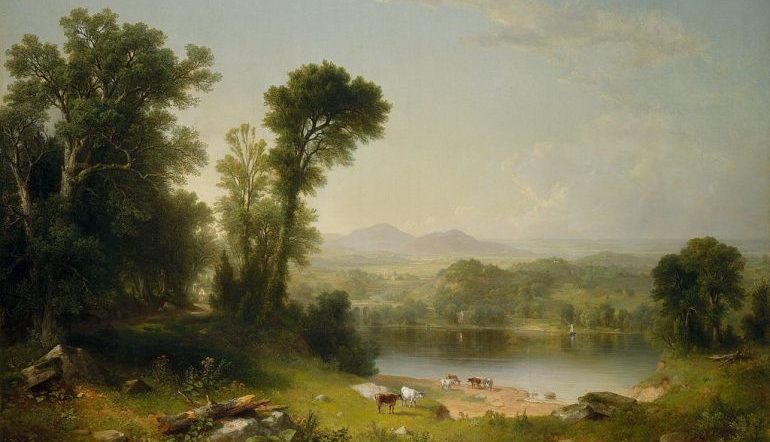 In college, I spent much of my time in the classroom talking about trees. Shakespearean forests, pastoral glens, country houses. I knew that poetry about nature was removed and esoteric, but it was also the poetry I often loved most. There are myriad reasons, of course, that poets choose nature as their subject. Nature offers the comforting suggestion of continuity, an awareness of scale; it can be both menacing and welcoming; it’s fertile ground for symbol and simile. However, in times of heightened political tension, poems about trees can feel like a cop-out, or especially irrelevant. Last week I taught “The Garden,” by Renaissance poet Andrew Marvell, to a classroom full of sleepy-eyed college kids, and I wondered whether we should be reading this sort of garden poetry—which celebrates retreat from society, activity, and political life—at all. This question led me to Adrienne Rich’s poem “What Kind of Times Are These,” which explores in a contemporary context the question of poetic retreat versus political engagement. The poem wrestles with the inextricability of landscape and history, and settles on the suggestion that “in times like these / to have you listen at all, it’s necessary / to talk about trees.”

Rich’s poem is in conversation with Bertolt Brecht’s 1939 poem “To Those Who Follow in Our Wake.” Brecht, writing in a time of political upheaval, addresses the concern of retreat versus engagement with anger: “What times are these, in which / A conversation about trees is almost a crime / For in doing so we maintain our silence about so much wrongdoing!” Rich’s poem alternates between a similarly outraged tone and wistful observation of nature. The first stanza begins “There’s a place between two stands of trees where the grass grows uphill / and the old revolutionary road breaks off into shadows / near a meeting-house abandoned by the persecuted / who disappeared into those shadows.” The subsequent stanzas follow this pattern, beginning with idyllic, pastoral imagery and ending with a deep awareness of history:

I’ve walked there picking mushrooms at the edge of dread, but don’t be fooled
this isn’t a Russian poem, this is not somewhere else but here,
our country moving closer to its own truth and dread,
its own ways of making people disappear.

For Rich, the pastoral has inherent appeal as a way of making people listen. It’s an interesting philosophy—that people will more readily read a poem that’s ostensibly about nature, with some politics mixed in, rather than one that is overtly about politics or history. Perhaps it’s because nature feels inherently personal, and represents the reasons many people seek out poetry—poems are, for many, spaces for reflection, self-examination, brief retreat. This is why a poem like Marvell’s is appealing: it suggests that a life separate from the “uncessant labours” and “busy companies of men” is feasible, if only temporarily. “The Garden” fetishizes solitude, an attitude that’s comforting for young people seeking validation in poetry: “Society is all but rude, / To this delicious solitude.” It’s a beautiful, layered poem, not only about renunciation and retreat, but about the sensual pleasures of getting lost in nature: (“Stumbling on melons as I pass, / Ensnar’d with flow’rs, I fall on grass”). Rich is right: good nature poetry draws the reader in, invites them into a space of heightened attention.

In Rich’s poem, descriptions of nature aren’t only a device to hold the reader’s attention. Land, and the trees and artifacts within it, is itself at stake:

I won’t tell you where the place is, the dark mesh of the woods
meeting the unmarked strip of light—
ghost-ridden crossroads, leafmold paradise:
I know already who wants to buy it, sell it, make it disappear.

In Marvell’s British Renaissance poem, nature can be juxtaposed with “Society” (as antidote or refuge). Conversely, in Rich’s contemporary American context, the landscape is at the whim of society (those who want “to […] make it disappear”). The continued existence of the “dark mesh of the woods” is itself a political issue. In Marvell’s poem the speaker is ensnared and protected by nature; in Rich’s, the speaker is the protector. Perhaps it is “necessary / to talk about trees” because the trees themselves are at risk in a literal way (climate change, deforestation); they are emblematic of the human “wrongdoing” Brecht laments in “To Those Who Follow In Our Wake.”

Brecht’s poem can be read in response to poems like Marvell’s; Rich’s poem directly complicates the dichotomy between political poetry and pastoral imagery that Brecht raises. When read together there seems to be room for both modes of engaging with the world—and perhaps each can even enhance and nuance the other.