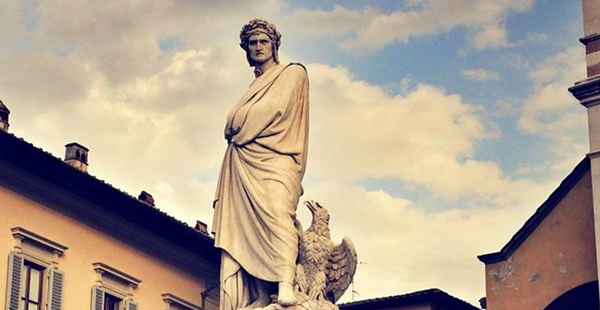 When I arrived in Florence for an extended trip, jet lagged and red-eyed, I was determined not to look like a tourist. I wanted to carry a leather-bound notebook and sit at sidewalk cafes drinking cappuccinos and looking thoughtful. Mostly, I wanted to read The Decameron and the last two books of The Divine Comedy with a Tuscan backdrop.

What actually happened is that I ran out of time to read everything I wanted to while I was still in Florence. Instead, I decided to pick quotes from The Divine Comedy and trust Dante to inspire my tour–he was, I suppose, Hell’s greatest tourist. It was not hard to imagine his influence as a I hobbled down the grey cobblestone of Borgo Santa Croce every day. I passed pairs of double iron doors that faced out toward the alley, quiet and blank. Inside a café nestled in the narrow street, a woman with thick black curls would thump a tin cup against the counter like a gavel. She always took her time smoothing frothed milk for a cappuccino.

In the alley, the smell of brewed espresso mixed with the sweet incense from a perfumery. In the piazza at the mouth of the alley, a statue of Dante stood stone serious in front of the Basilica of Sante Croce.

“Nature is the art of God.”

Fottoria di Celle is a 60-acre estate just outside of Florence and home to eccentric art collector Giuliano Gori. While the estate produces its own olives and wine, it’s most famous for its site-specific art (a piece in which the artist takes the location into account when planning and creating) from world-renowned artists like Aberto Burri and Sol LeWitt. Only select visitors are invited onto the grounds each year and I was lucky enough to be a recipient of an invitation. The estate is so large, sometimes overgrown and sometimes mountainous, that it takes four hours to tour the entire collection.

It was George Trakas’ The Pathway of Love that I remember best from Celle. Trakas had created two walkable paths hidden in the most densely forested area of the estate–one wood and the other steel. They ran parallel to each other, sometimes shaping into steep steps or crossing a body of water and running thin. Both paths continued until finally connecting over a roughly heart-shaped pool, which Trakas created from dynamite. As the docent explained, there can be no love without an explosion.

“From now on, let your pleasure be your guide.”

I lived with five people in a tiny Florentine apartment, all of whom made sure that every night at 11 Arnolfo was a memorable one. The street we lived on was named for the architect Arnolfo de Cambio, a contemporary of Dante’s known to have the same stil novo (“sweet new”) style to his architecture that Dante had in his poetry.

Antonio, an illustrator from southern Italy who knew very broken English, was my favorite roommate. He often woke up earlier than everyone else. One morning, he decided to make espresso for the house. Once it was made, he ran around the rooms with the cups in his hands yelling, “Caffé, caffé, caffé!” and waking everyone up.

Antonio once huffed into the kitchen with a cigarette in one hand. He leaned against the counter, took a drag and shook his head.

He meant chaos. I explained the difference, and he shuffled around the house mooing the rest of the day.

“My soul tasted that heavenly food, which gives new appetite while it satiates.”

In Italy, food is an event. It becomes easy to take an hour-and-a-half lunch, or nurse a cappuccino throughout the entire day. Whole food festivals are often planned in Piazza Michelangelo, like the annual gelato festival, where samples of gourmet and experimental gelato can be had without limitation–there are even gelato cocktails. The celebration of the Italian dessert was so momentous it could have been a dedication to God. The festival was a good lesson in moderation, though, for my stomach. Something Americans could learn.

One night, hungry for seafood, I purchased an Italian fish called bakala, which is usually purchased dried and salted at the store, but must be soaked for twenty-four hours before you can eat it. There’s no English translation for the fish, since it’s exclusively made in Florence and Rome, so I took a chance on it for dinner. Eating bakala straight out of the package was like guzzling salt. When Antonio found out what I’d been eating, he could do nothing but laugh.

Through the second half of November and into December, Piazza Santa Croce hosts an annual Christmas festival. The piazza is packed with vendors from Europe offering vino brulee, red wine boiled with cinnamon and cloves, or batches of paella from Spain in giant steel pots. A group of young nuns, surprisingly aggressive in their sales pitches, sold hand-crafted tree ornaments; an elderly man from Venice offered olive oil decanters painted in Venetian red.

As the air began getting cold, the vendors stood vigilantly by their products wrapped to their eyes in wool scarves. I communicated with them in spliced English and shivers. After a long day I would sit on the steps of Basilica Santa Croce and use a cup of vino brulee to heat my hands. I watched the Roma women in their red head scarves shaking tin cans for Euros, and lingered in those seconds.

These quotes, taken from The Divine Comedy, were the guides for my time in Florence and forced me to interpret my explorations in a way I might otherwise not have thought of. In the end, there couldn’t have been a better guide than the Florentine-born poet himself, who’s statue stands careful watch over the heart of the city and who watched steady over my journey.