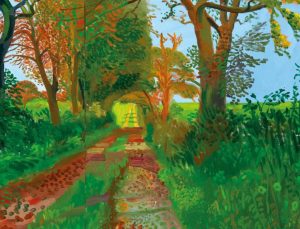 Written in the immediate aftermath of Brexit, a time of “people saying stuff to each other and none of it actually becoming dialogue,” Ali Smith’s Autumn questions how ripping up common ground in favour of enhanced borders reverberates through time and into living human bodies. Most pressingly, it poses this divisive political event as one that conflates history—and all its cruel errors—with the present moment, and refutes linear time by robbing the next generation of their future.

I was in Vermont when the Brexit vote went through, and was initially surprised at the charged American response. As an Irish person, I knew what it meant for me: the economic instability of our main trading partner, the Northern Irish border, soft since 1999, potentially resurrected as volatile boundary line.

I was surprised because I hadn’t fully realised how Brexit was being utilised as a barometer for the 2016 US presidential elections, though of course it made sense. In each instance, after all, the outcome would gauge the contemporary desire for division, as well as the belief—‘til then presumed extinct outside the deepest divots of ignorance—that such division is beneficial and timely.

Flying home a week or so later, I knew it would still be years before Brexit’s legislation garnered enough solidity to impact Ireland. I also knew that if Donald Trump was indeed elected, there were perhaps a handful of times remaining where I could assuredly travel to America, and that others seeking entry there for more pressing reasons than I would be feeling profoundly, devastatingly curtailed.

This is what Smith renders so sharply in Autumn: how politically coded geographical constraint repercusses living flesh, how this reduction of physical space filters into proprioception as the body learns to wear its hemmed-in or quarantined status.

In Autumn, we follow Elisabeth, a 28 year old art history teacher, in the immediate wake of Brexit. If the process of renewing her passport is somewhat predictably tedious, the simple act of walking along a fence becomes a bureaucratic entanglement:

Fine day, she says.
You can’t walk here, he says.
Yes I can, she says.
[…]
This is private land, he says.
No it isn’t, she says. It’s common land. Common land is by definition not private.

As Elisabeth continues to move through spaces public and private, rubbing up against resuscitated and fabricated borders that aim to coerce certain bodies into certain corners, the novel simultaneously takes place in the late 1980s. Here, we see the conception of Elisabeth’s childhood friendship with her 85 year old neighbour, Mr Gluck. These two people, with nothing but their address in common, throw a harsh light on the contemporary refusal of shared interests beyond the most pedestrian of nationality and race. In the here and now, common ground with one’s neighbour is no longer a given, and this reduction feels all the crueller for being presented alongside a flourishing ‘unlikely’ friendship.

This device of a friendship between two people in waning and waxing phases of life also makes apparent the repetitive mechanisms of politics and world history:

As such laden references accrue, the question becomes not so much how Autumn delivers both past and present to underscore cyclicality, but how human action can create a sense of temporal conflation.

Throughout the novel, the prose maintains an ambivalent relationship with history:

But whether a mocking, admonishing, or informative presence, the past has been so emphatically unlearned as to never have occurred, and so what Elisabeth confronts is not so much a fraught present tense as the past’s pale repetition. With history dismissed as refutable and the future voted irrelevant, the present moment becomes strangely redundant, and this more insidious impact on post-Brexit bodies is perhaps what takes longest to fully unfold.

A quarter into the novel, we see Mr. Gluck’s mother, Hannah, in Nice in 1943, sitting on the floor of a truck in which she and eight other women have been ‘picked up’:

This causal detaining of human bodies and the blank gaze of the as yet unscathed is, of course, sickeningly plausible by current standards and, though one of countless such examples extracted from WWII, even familiar. By placing such moments alongside the racial bigotry enabled by Brexit, Smith suggests that the flooding of the present with the cruel errors of the past will, at best, see the future truncated, at worst, entirely expired.

Though the novel often deals in rupture with no seeming chance of suture, its rawness is more formal necessity than conclusion; Smith wrote the book in a kind of ‘real time’ experiment to see how accurately a novel can capture contemporary events. And, despite its bleakness, there are moments not of hope, but of possibility: Mr. Gluck’s mother ultimately walks out of the truck, and we leave her at a moment still fecund with resistance, before complacent submission has become systemic. As Hannah reflects, ‘The city isn’t used to it yet.’

These last few weeks I’ve found myself revisiting that summer in Vermont, the night I watched the referendum’s results unfold in a different time zone to my family and friends, and at first I wasn’t sure why. Then I realised that, of course, this month marks a year since Trump’s election, and that whatever else might link the two events, on both occasions my stomach swilled with sadness and short-lived disbelief.

This month also marks the release of Winter, the next instalment in Smith’s ‘real-time’ quartet. With Autumn having captured so precisely the fading and shedding that permeated the months following Brexit—the disbelief that overnight landscape can be filled with more detritus than one body can ever hope to wade through—perhaps Winter will capture the first seeds of renewal, and allude to what arises after a necessary death.