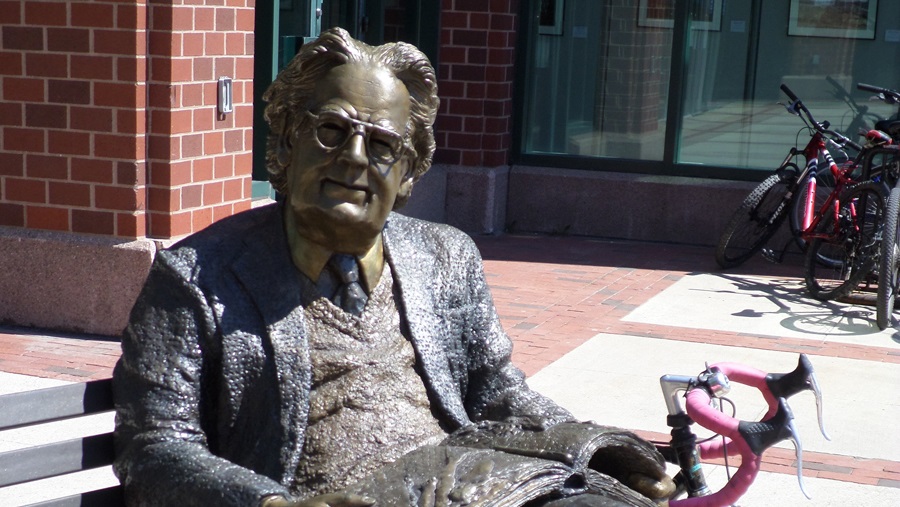 With five new critical studies of Northrop Frye hitting the bookstores this year, 2015 is turning out to be Frye’s year. Frye was one of the 20th century masters of myth criticism: if you’re at all interested in archetypes, the hero’s journey, or the intersection of religion and literature, Frye is the writer for you. But for those unfamiliar with Northrop Frye, it might be a bit daunting to step into books like Northrop Frye and the Phenomenology of Myth or Northrop Frye and American Fiction. As with most books about deceased Canadian academics, you might not even crack the spine. That would be a shame. As an undergraduate, Frye was one of the first literary critics I was able to take a serious interest in. He writes with tremendous imagination about almost every major work of Western literature. Reading Frye is an education in the whole of literature, which is just as exciting and daunting as it sounds. So I’d like to sell you on reading books by and about Frye by exploring four of my favorite ideas from what I consider his best book: Anatomy of Criticism.

Frye can’t start critiquing literature without first defining what literature is. (Actually, in the introduction he starts at the very beginning by defining criticism itself. Pedantic? A little. Worth reading? Definitely.) He eventually settles on what I find to be one of the more intriguing definitions of literature: “autonomous verbal structures.”

Outside of literature, words aren’t autonomous. Without the outside world to refer to, they don’t have a leg to stand on. “In fourteen-hundred ninety-two, Columbus sailed the ocean blue.” These words, even though they have a musical and literary quality, are referents to persons and places and events that actually exist.

But fiction and poetry tend to point inward, toward themselves. “It was a bright cold day in April, and the clocks were striking thirteen.” The opening sentence of George Orwell’s 1984 uses words and knowledge we know from the outside world (what April is, the fact that clocks don’t have a number thirteen to strike), but the world they refer to is fictional, a product of the author’s and reader’s imagination. Words in a work of fiction don’t exist so much as they insist. They say “It is so,” and so it is. This brings literature into the realm of speech action together with the law (“You’re under arrest”) and religion (“I pronounce you man and wife.”)

The Theory of Modes

Frye’s theory of modes divides all of literature into five categories based on our relationship to the hero or protagonist of a story. At the one end of the spectrum we have the Mythic mode, where our protagonists are deities and demigods who are superior to us (the readers) and to their world. On the other end—after stepping down through three modes of decreasing divinity and increasing humanity, from the Romantic to the High Mimetic to the Low Mimetic—we have the protagonists of the Ironic mode: the mad Don Quixotes and the hapless Falstaffs and the whole cast of It’s Always Sunny in Philadelphia.

The theory provides us with an interesting vocabulary for discussing characterization, which is great, but I think it does something more important. By organizing literature into characteristics which are irrespective of historical context, Frye opens up a world of interesting correlations. Like the New Critics, Frye levels the playing field, bringing all works of literature into a single conversation. What does Henry V have to teach us about Luke Skywalker, and vice versa? How does late Roman ironic literature like The Satyricon relate to Postmodern American ironic literature like The Crying of Lot 49? The theory of modes lets us treat Literature as a whole rather than as a series of discrete pockets of history that can only be discussed by experts.

Mythos is the Greek word (Aristotle’s favored word) for “story” or “plot.” Frye divides stories into four categories or parts of the Cycle of Mythoi: comedy (the mythos of spring), romance (the mythos of summer), tragedy (the mythos of autumn), and irony/satire (the mythos of winter). It’s easy to see that there’s something spring-like about the progress of a comedic protagonist from a bad (cold) state to a better (warmer) one, and the converse is true of autumn and tragedy. But Frye isn’t just drawing an analogy. He’s saying that at base our conceptions of plot—the shapes human lives can take when we express them in language—are drawn from the processes of the natural world. The turning of the seasons, the decay of the body, the return of plant and animal life from dormant hibernation: Nature is the mother of metaphor and story.

Again, Frye seems to be fighting against a conception of Literature that would bring individual works of literature out of contact with one another. If the natural world is the source of all stories, then all human stories have the same source. The biggest changes in story have come with the shifting of our understanding of nature, from a holistic world of spirits and prime elements to the world we live in now, where we can crash atoms into one another and look at what falls out. Only these changes can produce a change at the very heart of metaphor. As before with law and religion, Frye now puts literature in contact with science.

This, of course, isn’t one of Frye’s ideas, but it’s an idea I’ve been confronted with every time I’ve read Anatomy of Criticism. Perhaps myth criticism is pure hokum, a clever twist on the New Criticism’s worst Eurocentric and antisecular prejudices. Can we really ignore differences between cultures and historical periods, even provisionally, in order to focus on what their stories have in common? Do stories and genre structures really mirror or emerge from natural cycles of birth, death, and rebirth, or isn’t it all just a bit less mystical than that?

The question of whether we are willing to engage with myth always comes down to the question of whether we are willing to admit the existence of some mystical element in the universe. Frye is a believer in the human spirit, two words whose contradictions and affinities generate a sort of electricity, a spark we didn’t know we were missing until we read something that takes them seriously. Studying the work of Northrop Frye, even if you ultimately don’t agree with him, takes you further into the mysteries at the heart of literature, the nature of story, and the relationship of the word to the world.