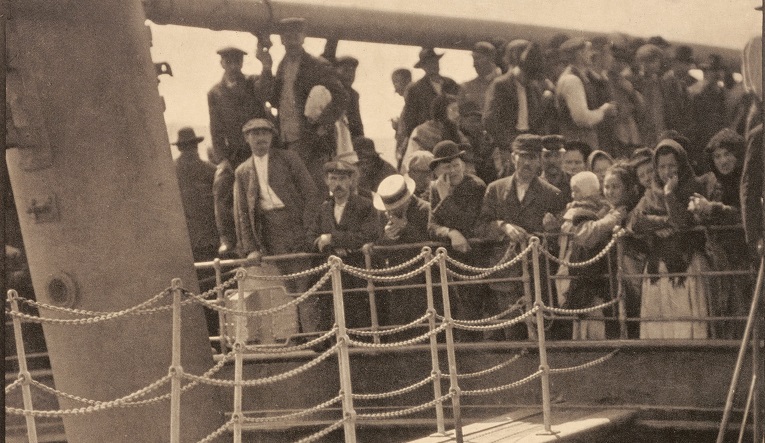 Jhumpa Lahiri first visited Italy in 1994. Two years ago, her latest book, In Other Words, came out: it’s a memoir written in Italian, the language she’d grown to adopt after moving to Italy, relinquishing–for a while–English in the process. In this book, the voice is directed inward, terse and to the point. It’s still feeling its way around a foreign language, bumping into its limits, testing what it can and can’t do. Lahiri declined to self-translate the book into English, leaving the translator’s ordeal for another. The final product has the two languages facing each other, each on one page. This presentation is symptomatic of how Lahiri has described her life: straddling two languages, unable to fully relate to either. Italian becomes a way to rediscover the potential of learning not just something new, but a whole new set of practices and expressions–a whole new language. Packing her bags and whisking her family off to Italy means reactivating her childhood experience of migration, but on her own terms.

Those of us who have been immigrants, or their descendants, know that the immigrant identity is rooted materially as much in a social, economic, and political structure as in language. Language acquires a materiality that the native-born rarely experience: it becomes a thing that, beyond the facile clichés exoticizing the hybridity of the immigrant experience, dictates so much of the immigrant’s life. We fill out forms, we ask questions, sometimes we learn to write again with new alphabets or change our very names.

In Lahiri’s stories, immigrants live in a world defined by language, its possibilities, its dead-ends. The legal and political aspects of immigration don’t appear to be the biggest cause of trouble for the characters. Language, however, that first branch of culture, is another matter: characters must continuously code-switch, juggle, negotiate, conceal, and readjust. The Namesake is all about naming: reclaiming, reappropriating what’s been chosen by others. The novel highlights the generational and cultural nuances of this, and circles around the fundamental question–who uses which name in which context?

What are our names? How do we call each other, in broad daylight, on the uni campus, at the grocery store, in the intimacy of the home? How can we call each other when our language is forgotten, dismissed, erased, or suspicious?

In The Lowland, Lahiri’s most recent novel, it’s the figure of Gauri that’s most arresting. She doesn’t seem, at first, to be the protagonist–appearing only at the very end of the first part, and even then her introduction is delayed, relayed as it is through the caption on a photograph of her. Udayan has eloped with her and sends her photo to his brother Subhash, who’s in the United States studying oceanography. She’s presented as bookish, intellectual, perceptive. Subhash returns to Calcutta when he learns that his brother, involved in the Indian Naxalite movement of the ’60s, was killed; he suggests to Gauri that they get married so that she can escape with him to Rhode Island. She agrees, and once there, she gives birth to a daughter, Bela. She enrolls in graduate school, and progressively grows detached from Subhash and Bela. When Bela turns seven, Gauri flees the makeshift family unit, leaving daughter and pretend father behind. She goes on to become a philosophy professor in California and a notable name in her field. By her sixties, she still hasn’t taken on American citizenship, but may soon do so– it’s a move she perceives as a betrayal of Udayan’s memory.

In this sense, Gauri is a classic figure of the immigrant–especially the female–who learns to survive by negotiating integration and difference. She had never planned to move to the US; due to the ideologies with which she’s grown and which she’s espoused, especially when marrying Udayan, the country wouldn’t have been her first choice anyway. Even so, she did migrate, and the country did let her in, and she did carve out a place for herself, even if it came at a price many would consider too high.

The men are often the ones initiating the move to America in Lahiri’s stories, which may seem realistic enough for the time period she’s describing. But it’s the women who teach us how deep the relationship between language and the migrant body can go. In the film version (one of those rare occasions where the film actually brings to life the spirit of the book and doesn’t impoverish it), when prompted to read some English literature, Ashima Ganguli, beautifully played by Tabu, begins reciting Wordsworth: “I wandered, lonely as a cloud.“ We wonder then if she really is prepared–how do daffodils measure up against what the US has in store for her? And indeed, in the first months of her arrival, we witness her struggles, her frustrations. Yet she’s the one who outlives her husband, and finds habits, and negotiates most successfully both old and new knowledge.

And so Ashima does really wander, lonely as a cloud. To all of us who’ve been defined at some point of our lives as immigrants, she’s a projection of ourselves as we try to hold onto the words that may have accompanied us during our many trips, giving us expectations, or a purpose, or just the motivation to go on. And so is Lahiri, as she seeks to reassert herself willingly in another language, to give herself a second start, or chance, after all the new beginnings that were imposed on her.

Over the past decades, talking about immigration has meant talking about legislation, economics, politics, belief systems, ethics. What may literature contribute to all of this? Perhaps merely the precious reminder of what language concretely does to us all: allowing us to name ourselves without dismissing our fluidity, and to partake in something beyond the limits of those names.