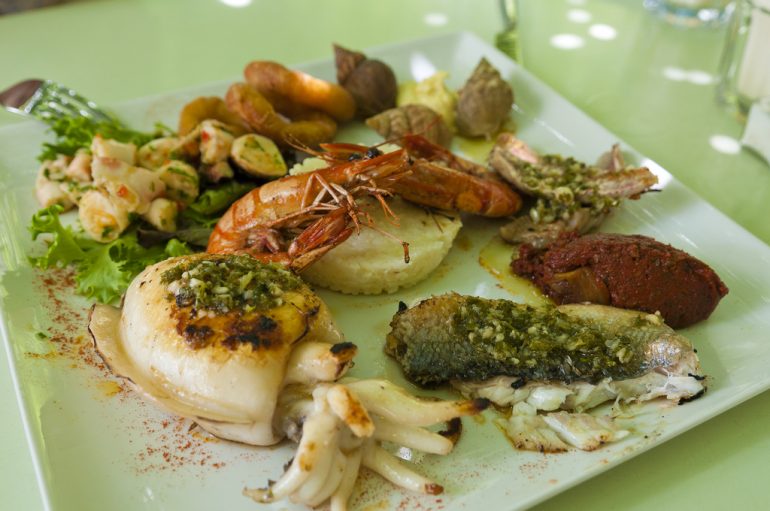 Being a lover of food and memoirs, I have a dream of living in a foreign country, especially in Europe, for a year and writing about its food customs. In any case, food is often so inextricably woven into the fabric of a country’s social life that when one writes a memoir about experiences of that place, food appears in a starring role whether it’s a food memoir or not. One such classic work is Peter Mayle’s A Year in Provence. Provence, a region in Southeastern France, is known for its fine cuisine.

A Year in Provence captures with compelling language and charming humor Mayle and his wife’s experiences of living in Provence in the 1980s. The book is organized into 12 chapters, each simply named after the 12 months in a year. Mayle, a British writer, writes about his many travails while settling in Provence, his many encounters with singularly engaging people, and the beauty of the French countryside, but food springs forth in almost every chapter. The French obsession with food seduced Mayle with the flavors of wine, bread, olive oil, and mushrooms, including the truffle.

Mayle’s memoir has many descriptions of meals, grocery markets, and his transformation into a gourmet. The book provides rich scenes of meals eaten in cafés and restaurants featuring the specialties of Provençal cooking. Mayle then goes off into his own search of wine, bread, olive oil and mushrooms, buying and cooking with these ingredients.

The book begins with: “The year began with lunch.” The beginning features one such on New Year’s Eve:

There were some serious stomachs to be seen—entire families with the embonpoint that comes from spending two or three diligent hours every day at the table, eyes down and conversation postponed in the observance of France’s favorite ritual. The proprietor of the restaurant, a man who had somehow perfected the art of hovering his considerable size, was dressed for the day in a velvet smoking jacket and bow tie. His mustache, sleek with pomade, quivered with enthusiasm as he rhapsodized over the menu: foie gras, lobster mousse, beef en croûte, salads dressed in virgin oil, hand-picked cheeses, desserts of a miraculous lightness, digestifs. It was a gastronomic aria which he performed at each table, kissing the tips of his fingers so often that he must have blistered his lips.”

Almost each chapter of Mayle’s book regales the reader with similarly appetizing exposition, establishing that the culture of a place like France can’t be separate from gastronomic indulgence. Mayle shows in his book the way people eat at restaurants in France and the almost religious reverence for the staples of Provençal cooking. He chose restaurants by consulting the Michelin and Gault-Millau guides. He found that café owners often dictated to him and his wife the wines to drink and the food to eat—the chef and the owner gave little choice. But the recommendations always turned out delicious and satisfying.

In a restaurant in Lambese, Mayle “dithered enjoyably between lamb stuffed with herbs, daube, veal with truffles, and an unexplained dish called the fantaisie du chef.” The owner, an old man, took the order. The author’s order of food was accepted—not without a sardonic comment—but his choice of white and red wines was shot down.

“No,” he said, “you are wrong.” He told us what to drink, and it was a red Côtes du Rhone from Visan. Good wine and good women came from Visan, he said.

Mayle also learned about the primary ingredients of Provençal cuisine and developed a strong liking for them à la French. He learned that the foremost of France’s obsessions is wine. People drink wine as though it is essential nourishment—for instance, while working in the field and after a hard day’s work. Mayle got to watch production of wine from up close and own a part of vineyard around the house he bought.

Mayle’s vineyard partner, the pastis-drinking Faustin, along with the chef des vignes, Monsieur Beauchier, and Faustin’s family members, planted vines. In “March,” Mayle gives a colorful description of the ceremonial atmosphere of the crew planting grape while imbibing wine during breaks. To buy wines from other estates, the author went to dégustations, or wine tastings, at Gigondas and Beaumes-de-Venice and Châteauneuf-du-Pape, and bought directly from the proud men who made the wine.

The book also describes the pleasures and pitfalls of eating the funguses France is famous for. Experiences with wild mushrooms—knowing the poisonous ones is vital—and truffle are proffered in rich detail. We get a crash course on the secretive world of truffles: “Strangers can get a glimpse of it by going to one of the villages around Carpentras. There, the cafés do a brisk trade in breakfast jolts of marc and Calvados, and an unknown face coming through the door brings muttered conversations to a sudden stop.”

Mayle goes on for five pages describing the trading, hunting and cooking of truffles. He ends his truffle story with omelettes “moist and fat and fluffy, with a tiny deep black nugget of truffle in every mouthful, a last rich taste of winter.”

In fact, early in the book, in “February,” he spies “the inhabitants hurrying home from the bakery with bread clutched to the chest.” In “October,” he says, “We tried the dense, chewy loaves from Lumieres, fatter and flatter than the ordinary baguette, and the dark-crusted boules, as big as squashed footballs, from Cabrieres. We learned … the best bread for making croutons or for spreading with rouille to launch into a fish soup.”

Mayle’s memoir is sprinkled with sights of salads glistening with olive oil. To buy his stock of the finest olive oil, he went to a mill. Back home, he savored the oil: “Before dinner that night, we tested it, dripping it into slices of bread that had been rubbed with the flesh of tomatoes. It was like eating sunshine.”

A Year in Provence ends with scenes of Christmas lunches—at his home and, later, on Christmas Day, at a restaurant. Local delicacies and champagne inspired the convivial spirit among guests. The book truly shows how food binds a culture and people. I hope someday I can emulate Mayle.