Home
»
Book Reviews
»
Poetry
»
How We Represent: A Review of FOUR FROM JAPAN: CONTEMPORARY POETRY & ESSAYS BY WOMEN 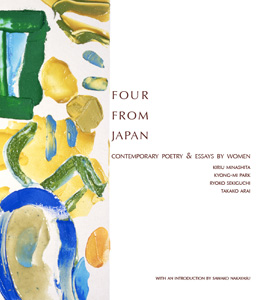 Four From Japan: Contemporary Poetry & Essays by Women is an anthology rooted in a specific time and place. No, that place is not Japan, nor is it the respective eras from which the four poets emerged. The time and place of which I’m thinking is New York City, 2006, the setting in which Poets House and Belladonna* hosted a Festival of Contemporary Japanese Women Poets. As noted by Sawako Nakayasu, this book, then, becomes a commemoration of that event: it crystallizes a collapsing of boundary (America/Japan) while also uprooting our notion of the when of these poems—they are contemporary, but they are now, in 2015, poems almost a decade old.

But this specific time and place does not pose a problem in reading Four From Japan. What is typically seen as limitation instead becomes a “stretching of the surface,” as poet Ryoko Sekiguchi writes in terms of translating oneself. Because there is a context, we can begin our learning of these poets and poems. For all of these poets—Kiriu Minashita, Kyong-Mi Park, Ryoko Sekiguchi, and Takako Arai—concern themselves with the elasticity of language and the variation of form—at the very least, the poems are all activation and possibility. They are borrowers. They unmask plural complications. For none of these poets want you to have a singular idea of “Japan,” “Japanese-ness,” or “poetry.”

The anthology allows its reader to explode one’s own conceptions and definitions and explore beyond the familiar. Sawako Nakayasu, the primary translator of this anthology and a very fine poet herself, proposes that this anthology works away from the idea that there should be “a narrow definition of women’s writing that focuses on identity.” Nakayasu insists that the writing works as “a contemporary border crossing,” so that the range of ideas and structures within the pieces is multivalent, “hybrid,” and difficult.

Kiriu Minashita is one of the poets dealing in this slipperiness. Her poem “A Perfect Day for Coelacanth” plays off J.D. Salinger’s “A Perfect Day for Bananafish,” but turns on another point: that “Coelacanth” is, at the same time, the common name for one of the most endangered species of fish in the world, and, according to a footnote, is also the name of a character in the Japanese alphabet. “Coelacanth” becomes, then, “common” (part of the language system) while also “rare” (the species that cannot be identified easily in the waters because the fish are few and far between). This paradoxical point of poetic production and pleasure is best amplified by Minashita’s own ars poetica, in which she writes:

“I believe a poem teeters at the very edge of nothingness, at the boundary between non-existence and a state of pre-existence, the instant before an object gets named and brought into being.”

The poems of Four From Japan all dance on this site where they almost exist and also do not exist: wherein the blank space on the page resides as primordial deep water that interacts with the named letter-fish swimming amid the knowledge of their own limited life spans. It’s no wonder most of these poets translate: they present a persistent awareness of all (of) language’s flexible functions.

The poets are at once aware of play and of political implication within these texts. As Kyong-Mi Park writes, “There’s no such thing as your ‘own’ language. Words that we call words all belong to others.” Whenever we speak, we are borrowing; whenever we write, we are flowing through a medium we did not create. No single agent can responsibly take credit for “language;” therefore, individual identity based on language or “culture” must be treated with special care and nuance. Takako Arai squares this notion in her poem “Fox, Appearing,” where her lines are all doubled and changed: “Possible he can see me / Plausibly it consumes me.” The similarity of “seeing” and “consuming” in the names reflects a colonialist or globalizing reality where the simple sight can be the same as a false ownership, a taking, a consuming. Arai, who teaches Japanese, reflects in her writing the realities brought forth in the deceivingly surface-shifts of syntax and sound.

Four From Japan: Contemporary Poetry & Essays by Women is one of the best anthologies I’ve encountered because the book shows a practice of de-centralization instead of map-making and canon-formation. The works are presented in translation and in Japanese; they provide writing by the poets in both lines and in prose; and they all interlock and complicate one another without presenting a narrow view of what Japanese poetry by women can be.