Home
»
Book Reviews
»
Poetry
»
Love and I by Fanny Howe 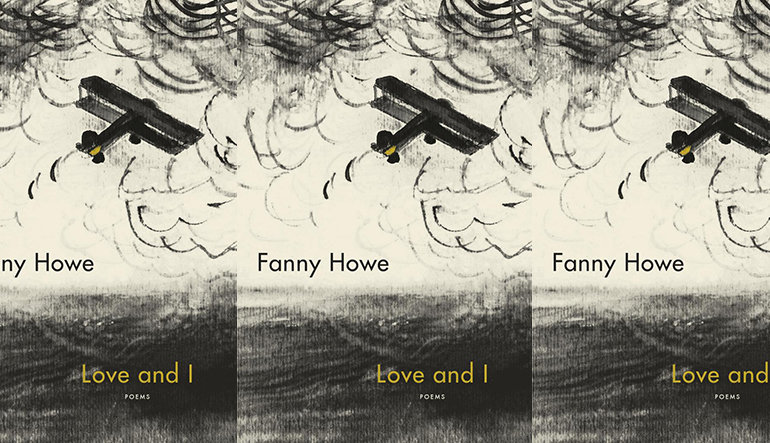 The adage “not all who wander are lost” finds fresh application in Fanny Howe’s latest poetry collection, Love and I, which zooms in and out on a series of modern-day conversations. In the conversation of the opening poem, “Allegories,” readers learn that Howe’s poems, though not always grounded by form or subject matter (speakers are sometimes in the air, flying over large swaths of land and life), are informed by matters of political and moral import. “Allegories” opens with, “I love so many of them / But they are only half a decade / Away from being disproved.” Though we carry with us stories that ground our lives and guide our sense of what it is to be a good person in the world, “Allegories” provides the perspective that the morals of our stories have the capacity to change and even elude us: “Is love one-way?” the speaker asks. “Almost always / It catches on a kiss. / Holds still for a flash.”

Many of the poems that follow have this flashing quality—an idea or moment of understanding that we can hang onto. Many of the poems have multiple movements within them: in the long-poem, “Turbulence,” the speaker seems to be in the air, mid-travel. The opening line reads, “Some who never feel loved keep traveling.” What follows is an exploration of flight and what it means to travel with strangers. The speaker brings in both the political and religious aspects of allegory in the second part of the poem:

The clouds were below with the puzzle of the past.
Bits of world clicked into place.

The wrong God saw this and showed no humor.
Instead tears rained down on Iran.

Readers are invited to wander through the associations Howe has made in the wake of a few simple lines. Is the speaker alluding to recent U.S. sanctions against Iran? What does the speaker mean by “the wrong God?” These unanswered questions are the method by which Howe crafts a multi-layered poetry, that, like love, comes in flashes but is never grasped. Likewise, the final poem in the book, “The Lamb”—a provocative title with its associations with victimhood, religion, and politics—has a similar flashing effect. “The plurality of the apple / makes us dare to pulp,” the poem begins. An apple biblically relates to sin and knowledge, but the apple also bears the definition of fruit, and one can choose to use the word without its history and connotation to justify injustice. The tension of the multiple meanings of an apple is strongest in the flash Howe creates at the end of the long poem, where the words of Eric Garner are interwoven into a discussion of a (perhaps biblical) shepherd:

My shepherd of the flock
Stay close.

Wherever
You go twice is blessed.

Howe’s ability to make many meanings possible in her poetry is linked to what she sees as the possibilities of bewilderment. In her 1998 lecture at the Poetics and Reading Series at New College in San Francisco, Howe defined “bewilderment” as “an enchantment that follows a complete collapse of reference and reconcilability. It cracks open the dialectic and sees myriads all at once.” “Everywhere I look, my thoughts grow wild,” her speaker says at the end of the poem, “2011.” In “Turbulence,” the speaker states, “Druids could not separate what they saw around them from their thoughts” and much the same happens throughout these poems. It is clear that the stories being told are multifaceted, that readers are welcome to wander down any path of association that speaks to them. Howe, however, turns on its head the fear many readers have about not fully understanding poetry, reminding us that, “Flight is an underused option on an airplane.” Poetry might be the vehicle by which some of us realize our ability to fly—the dreams, fancies, and associations brought to life by a poem should take us somewhere new.

Another striking feature of Love and I is Howe’s ability to redefine words. In “Monastic Life,” Howe’s re-definitions speak more deeply into associations that the poem’s title calls to mind:

Horizon: gone at night
Thought: given
Prison: a perversion

Allegory surrounding monasteries gestures to the monastic’s call to live in a cell. The fact that a cell is also the name for a room in a prison creates associations between these places that are quickly displaced by the aerial views that come before: the empty window seat, the horizon, and thought, images that move us beyond the cell walls and above the ground itself.

In Love and I, Howe leaves readers with a sense that much is left to be explored, not only in her poems but in the world outside our own associations. Like love, so much of what we understand rests in allegory, signs, and symbols. At the end of “Monastic Life,” the speaker ponders, “What if every living part of the created world / Lifted itself up to help the next part. / What if you stood when I entered.” In the wilds of associations that Howe produces, readers are sure to find both niches of rest and, simultaneously, calls to action. But perhaps our only responsibility is to wander.

Tags:Fanny Howe, Love and I