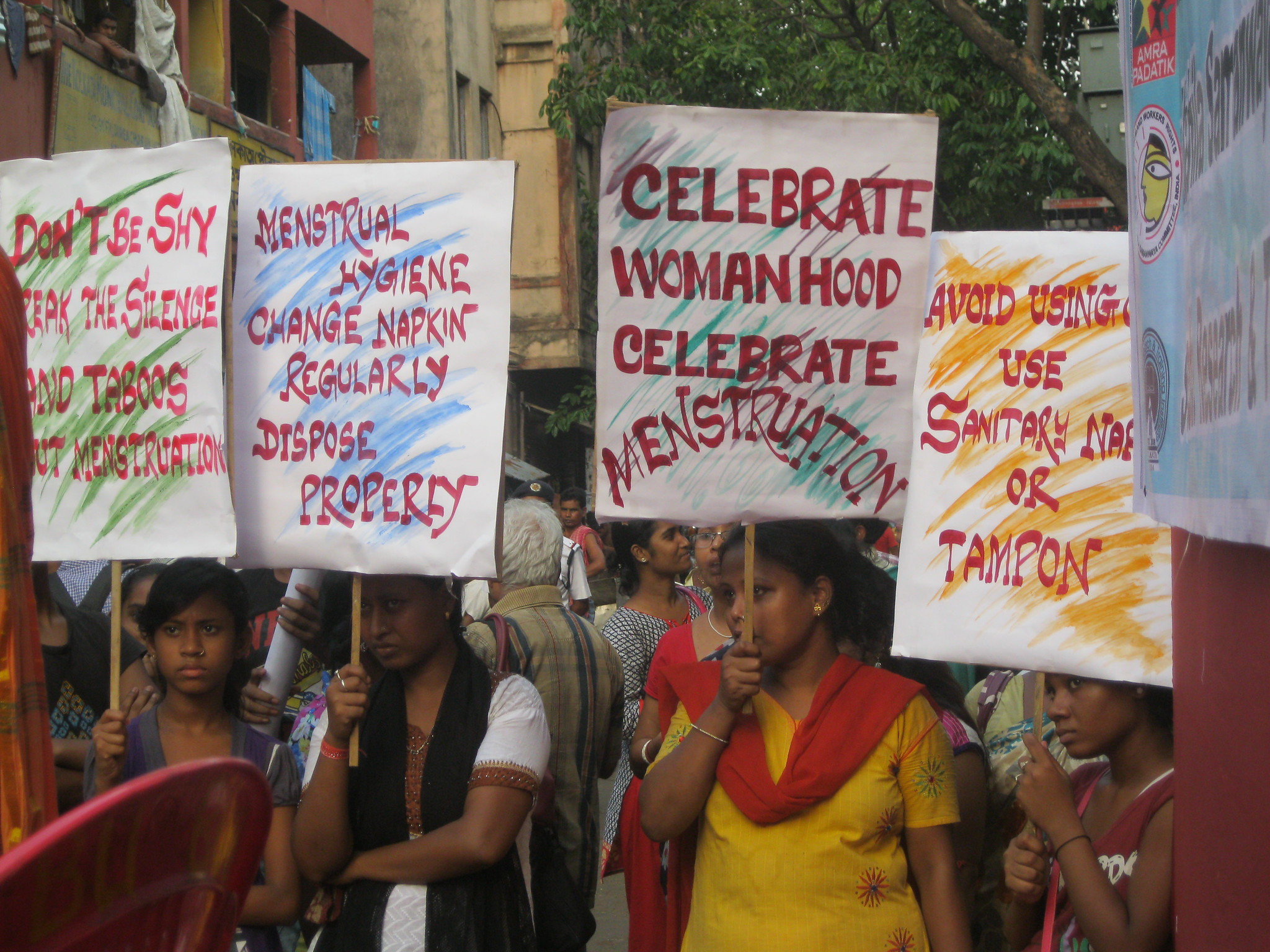 “A period is something I deal with, without thinking about it particularly, or rather I think of it with a part of my mind that deals with routine problems. It is the same part of my mind that deals with the problem of routine cleanliness.” In Doris Lessing’s 1962 novel, The Golden Notebook, the protagonist, Anna, worries about her period and how it will affect the integrity of her writing. In the early 1960s, it was unusual and brave for a work of fiction to mention menstruation, let alone explore it in such detail. Broadly speaking, in mainstream fiction, examples of menstruation are few and far between.

Until recently, the topic of menstruation has been universally regarded as taboo, shrouded in secrecy and mythology. Historically, in some cultures, men refused to acknowledge it, in order to maintain a romantic image of women. In others, it is still linked with ritual impurity and lunar madness, while in certain hunter-gatherer and mountain communities, it is viewed as a sacred time for female solidarity, associated with healing and psychic powers. These ideas and practices are reflected in those few works that deal with the subject, which incorporate themes of learnt shame and the existence of women “elsewhere” due to some form of negative transformation.

Bapsi Sidhwa, in her 1978 novel, The Crow Eaters, which is set in Pakistan, gives a clear depiction of the exile to which Putli, the wife of the main character Freddy Junglewalla, is subjected during her period:

Every Parsee household has its other room, specially reserved for women. Thither they are banished for the duration of the unholy state. . . . Putli quite enjoyed her infrequent visits to the other room. It was the only chance she ever had to rest. And since this seclusion was religiously enforced, she was able to enjoy her idleness without guilt.

It is in fact only when Putli is kept isolated in “the other room” that she finds some form of freedom. Nevertheless, she is reminded every month that, “Even the sun, moon and stars are defiled by her impure gaze. . . . She knew she couldn’t help herself to pickles or preserves for they would spoil at her touch. Flowers, too, were known to wilt when touched by women in her condition.” As much as Putli is “able to enjoy” the segregation, she knows during these days she is considered by everyone to be other: “The family was permitted to speak to her through closed doors—in an emergency, they could speak directly, provided they bathed from head to foot and purified themselves afterwards.”

In The Dark Holds No Terrors, Shashi Deshpande’s 1980 novel, set in India, the protagonist, Saru has a similar but opposite experience: while Putli is sent to the other room, Saru is banished from rooms:

It was just torture. Not just the three days when I couldn’t enter the kitchen or the puja room. Not just the sleeping on a straw mat covered with a thin sheet. Not just the feeling of being a pariah, with my special cup and plate by my side in which I was served from a distance, for my touch was, it seemed, pollution. No, it was something quite different, much worse. A kind of shame that engulfed me.

Unlike Putli, Saru resents every aspect of the experience—she associates it with becoming like her mother, whom she hates. Deshpande uses melodramatic language to show her anger and resentment: “You’re a woman now, she said. If you’re a woman, I don’t want to be one, I thought resentfully, watching her body.”

Contrast this with Pettinah Gappah’s short story “The Maid from Lalapanzi,” from her 2009 collection An Elegy for Easterly. Like Putli and Saru, during her period, Chenai is put in another space, but it is a metaphorical one: “When my period came, SisiBlandina was there to say, ‘Well you are in Geneva now, and you will be visiting regularly.’” For Chenai, “Geneva” undoubtedly connotes a foreign, distant, cold, and unfriendly place.

Throughout the story, Gappah maintains a natural rhythm in the dialogue, suggesting Chenai’s situation is the norm. Even when Chenai discusses a visit from Johnson & Johnson, in which the girls in the community are taught about their menstrual cycles by marketing representatives, the tone is matter-of-fact:

The women from Johnson & Johnson had come to the school, and separated us from the boys so that they could tell us secrets about our own bodies . . . It was an unsanitary time, they said. Our most effective weapon against this effluence was the arsenal of the sanitary products that Johnson & Johnson made with young ladies like us in mind, they said, because Johnson cared.

Similarly, in My Brilliant Friend, Elena Ferrante’s first Neapolitan novel, Elena is kept in ignorance about the menstrual cycle by her mother. When Elena gets her first period, she is “terrified by I don’t know what, maybe a scolding from my mother for having hurt myself between my legs.” The lack of shared knowledge illuminates how shame is learnt and passed on. Later, when her friend Lila begins having her period, Elena wonders whether Lila will become pretty, or ugly like herself. As it was for Saru, the onset of menstruation for Elena is fraught with anxieties about becoming something like another, or even “other.”

Miranda July’s short story “The Metal Bowl” could not be more different. Written in the first person, its narrator is candid: “Our son, Sam, trotted in sleepily, and I warned him not to get in the bed: ‘It’s all bloody.’ . . . Sam pulled back the sheets and studied the mess, smiling giddily. ‘You got your period.’ This new generation of men has been taught (by me) to feel excited about the menstrual cycle. . . . I’ve been waiting a long time to have my period cheered on.” July’s tone is cheeky: the narrator is aware she is pushing the boundaries of the modern-day limits of period-related conversation. She also, however, references “tadpoles turning into frogs or the moon that follows them wherever they go,” alluding to traditional menstrual myths: transformation, madness and sexuality.

In her fairy tale “Wolf-Alice,” from her 1979 collection The Bloody Chamber, Angela Carter uses menstruation to explore what it means to become not only a woman, but also more human. Wolf-Alice is raised by wolves and uninhibited by her nakedness and dirt. Previously only “filth, rags and feral disorder,” after she secretes “natural juices,” Wolf Alice recognizes a regular rhythm in her body: “The flow continued for a few days, which seemed to her an endless time. She had, as yet, no direct notion of past, or of future, or of duration, only of a dimensionless, immediate moment.” And then: “Soon the flow ceased. She forgot it. The moon vanished; but, little by little, it reappeared. . . . Sequence asserted itself with custom and then she understood the circumambulatory principle of the clock perfectly.”

Unlike Carter, whose imagery and vocabulary highlight the feminine, earthy qualities of menstruation, Jeanette Winterson, in her 1992 novel, Written on the Body, uses figures of speech that are equally visceral, but more masculine. The unnamed narrator here is ambiguous in gender, and says this about Louise, their lover: “When she bleeds the smells I know change colour. There is iron in her soul on those days. She smells like a gun.” Iron is an obvious reference to blood, but “in her soul” suggests a toughness, and “smells like a gun” alludes to a masculine phallic representation, both explosive and violent.

This attention to smell is repeated differently in Lessing’s The Golden Notebook: Anna is repulsed by herself and her alien smell: “I begin to worry: Am I smelling? It is the only smell I know of that I dislike. . . . And resent. It is a smell that I feel as strange even to me, an imposition from outside. Not from me.” Anna’s preoccupation with her hygiene and the wish that the days would pass quickly indicates how she is psychologically affected by her physical changes. She feels her period and its effects are not essential to her, but rather an intrusion.