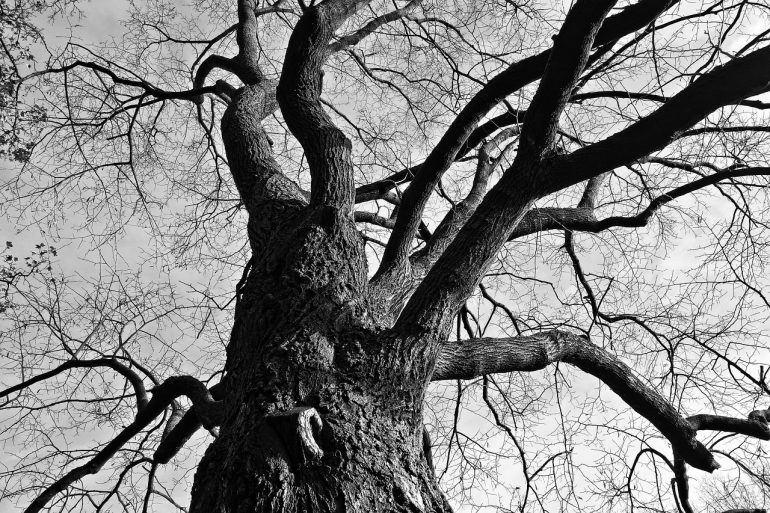 American writers have always explored, in one way or another, the influence of landscapes on the individual mind; the natural world inspires thoughts ranging from the nightmarish to the transcendent. Cynthia Ozick’s story “The Pagan Rabbi,” originally published in The Hudson Review in 1966, examines the ways in which the natural world can impact the minds of characters, changing patterns of thought and perceptions of reality.

In “The Pagan Rabbi,” nature is not a fixed, objective entity, but an animated, unpredictable, menacing presence. Set in the shadow of World War II, two characters try to make sense of a formerly rational rabbi’s increasingly surreal perception of the natural world.

“The Pagan Rabbi” opens in the aftermath of the suicide of Isaac Kornfeld, “a man of piety and brains.” The narrator, a bookseller and friend of Isaac’s, goes to see the tree in the public park from which Isaac was found hanging. He then goes to see Sheindel, the rabbi’s widow, at her home. The story is told in conversation as Sheindel and the narrator read aloud from notebooks Isaac has kept. Throughout the conversation they try to make sense of Isaac’s death; the notes, and Sheindel’s stories of Isaac, reveal a slow transformation of Isaac’s perception of the natural world.

“Our tragedy: our soul is included within us […] The soul of the plant does not reside in the chlorophyll, it may roam if it wishes […] Hence the other breeds, being largely free of their soul and able to witness it, can live in peace,” he writes urgently, in a passage from a letter addressed to “Creature.” This letter details Isaac’s encounters with nature and his effort to be rid of his soul, to witness it outside his body. He repeatedly visits a public park in which he believes he makes love to a nymph, and steps into a realm of perception beyond language: “Her sentences came to me not as a series of differentiated frequencies but […] as a diffused cloud of field fragrances.” The letter, read aloud by the narrator and Sheindel, alternately plays as comedic and tragic. In spite of themselves, the readers (and the reader of the story) are drawn into Isaac’s narration, his effusive descriptions of his visions, and his desire to be something he is not, to see his soul and know something about himself that had previously been obscured.

Central to the story is the tension between who Isaac is (a learned rabbi) and who he wants to be (a roaming, free, plant-like soul). Everything is transformed by this desire: a public park near a sewage ditch becomes a playground for dryads; on a family picnic, Isaac sees one of his daughters saved from drowning by a naiad; trees become personified, with waists and necks. Isaac’s desire is not just to be someone else, but to be somewhere else: to live in a landscape that’s inviting, animated, and benevolent.

This imagined transformation of inanimate things is paired with an image from Sheindel’s past, suggesting a possible relationship between Isaac’s delusions and a desire for safety. Sheindel’s “birth was in a concentration camp, and they were about to throw her against the electrified fence when an army mobbed the gate; the current vanished.” As the narrator observes, “she was an orphan and had been saved by magic and had a terror of it.” In Sheindel’s magical survival is the echo of the millions who were killed in identical landscapes. Perhaps in Isaac’s visions of benevolent naiads and souls free to roam outside bodies there is the impulse to create an escape route from a menacing world.

When Isaac does free himself of his soul, when he witnesses it wandering outside his body, it is not something light and free, but instead “a dusty old man […] half-bent over under the burden of a dusty old bag. The bag is stuffed with books […] He reads the Law and breathes the dust and doesn’t see the flowers and won’t heed the cricket spitting in the field.” After all his theorizations about Pan and wandering souls, after his visions of the Little People and dryads, after coming to see nature as an animate, personal, powerful entity, what Isaac finds when he’s able to free his soul from his body is that the soul he was trying so desperately to witness is the same as the self from which he tried to flee.

In exploring the boundaries between landscape and self, Ozick probes the ways in which immigration, war, and a desire to be elsewhere inform interactions between characters and nature. While the tale deals in extremes—historical extremes, extreme reaches of the mind—Ozick introduces new ways of approaching nature, the complexities of consciousness, and escape.