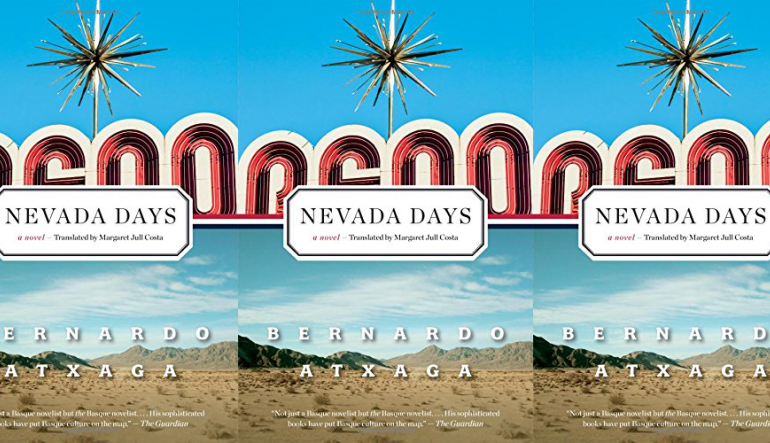 An author of novels, short stories, poems, and children’s books, Bernardo Atxaga (Seven Houses in France) pens a semiautobiographical account of nine months spent in Reno, Nevada, as a writer-in-residence at the Center for Basque Studies. He arrives August 18, 2007, with his two daughters, Izaskun and Sara, and his wife, Angela. He says,

Reno is always silent, even during the day. The casinos are airtight edifices, carpeted inside, and no noise spreads beyond the rooms where the slot machines and the gaming tables stand in serried ranks. You can’t even hear the traffic on the busiest road, Virginia Street, or on the freeways that cross the city, the I-80 and Route 395, as if they, too, were carpeted or as if the cars and the trucks were moving very stealthily.

The new, harsh landscape has an immediate effect on the narrator. Reno, to him, is a place with no peace where he exists in a state of permanent jet lag. Reno calls itself “The Biggest Little City in the World,” and as his friend Earle says, “[Nevada] is a state that flourished thanks to four things”: “[d]ivorce, gambling, prostitution and mining for gold and silver.”

The narrator tries to work, but his mind wanders and his paranoia expands. He lives mostly in his mind, not interacting much with other characters. He says, “The frosted glass eye in our front door might be able to trap the image of the casinos in the town centre, but the other eye, the Vigilant Eye, was sharper still and could even see inside the houses.” Then, news breaks of several unsolved attempted rapes on campus, which, to his horror, doesn’t seem to rattle the community in the slightest.

The narrator, aimless, takes long drives in the desert: “Suddenly, we were driving among trucks. From the other direction too it was mostly trucks, many of them with extra lights on the cabin, like the cars on carousels. We were driving home, and I felt as if I had been away for a whole month. Time was different in the desert.” Here and there he runs into bits of history about the generations of inhabitants of the West, and his reaction is a state of distant fascination: “In a passage devoted to Crazy Horse, Dee Brown explains that for Crazy Horse, the world we inhabit was merely the shadow of another world, of the real world, and that he could only get into that real world through dreams, and in his dreams he saw his horse dancing wildly, crazily, which was why he called himself Crazy Horse.”

There is not a traditional plot; rather, the book takes a diary form, and thoughts, observations, and memories bump into each other like buoys on the sea. “I felt confused. Thoughts and memories kept getting mixed up in my head,” he says. Similar to the desolate Nevada landscape, often whatever Atxaga is trying to convey that is not in the present (his memories of his Basque childhood and fleeting thoughts) feels somewhat incomplete and removed, just out of the reader’s reach. He says,

What had begun as a dream – one of those confused digressions, part-image, part-thought, that surface when you’re only half-asleep – suddenly became a febrile vision, a nightmare.

I tried to find an explanation for those images.

The most compelling element is the narrator’s relationship with Nevada. He says, “Night was falling. In the sky, it was hard to tell blue from black.”  The book’s structure is a series of vignettes (some titled “San Francisco,” “Christmas Eve,” “Telephone Call To My Mother”) or distilled moments explored rather than a continuous story. He says, “The fluorescent light in the kitchen transformed the ingredients of the gin and tonic as he took them from the fridge: the little bottles of Schweppes sparkled; the ice cubes glittered like glass; the green of the gin bottle took on an emerald tone; the yellow of the lemons gleamed like wax.”

Atxaga’s writing, “the voices in [his] memory-stuffed head,” follows its own rhythms as it inhabits these various places in time. He is an outsider, on the perimeter, even in his memories. Readers will smell the pervasive sagebrush and feel the lurking danger of the Wild West, a place where footsteps quickly disappear in the dry air and always shifting sand.