Home
»
Reading
»
“No Were There But” : Marwa Helal’s “Poem to Be Read From Right to Left” 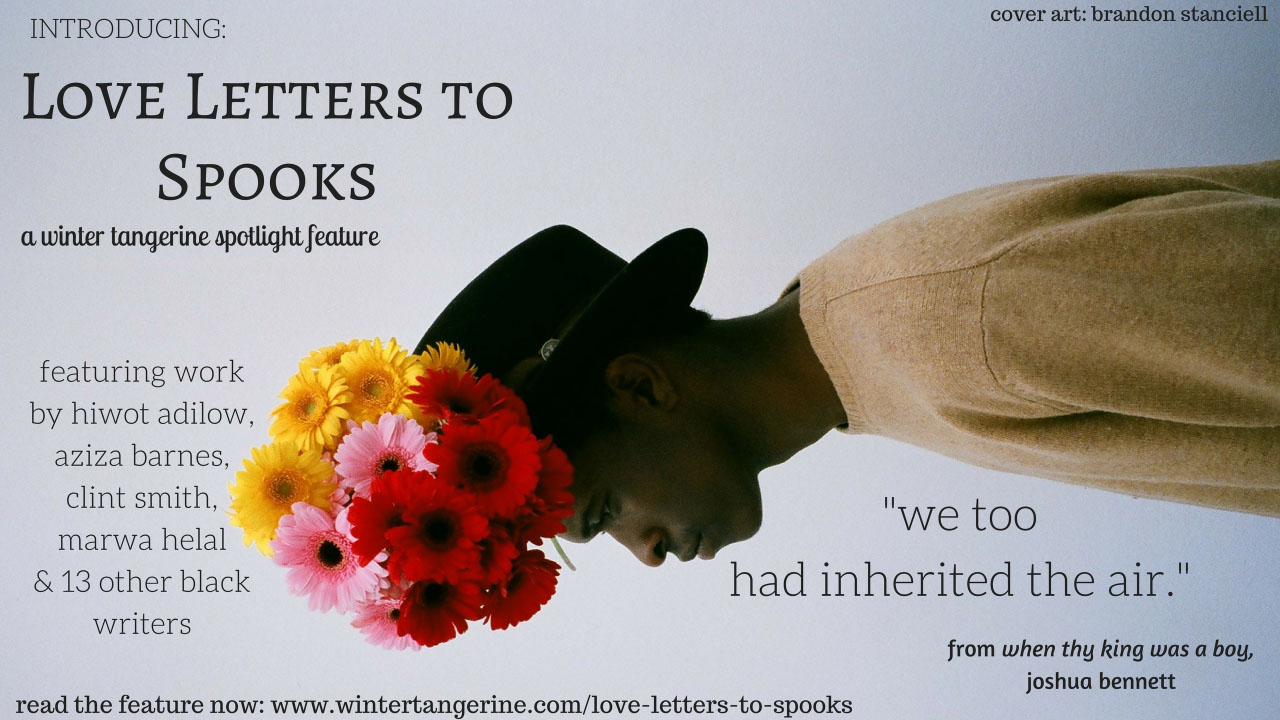 Marwa Helal creates dreamed documents, anti/ante-State dossiers, and diary entries. In “Poem to Be Read From Right to Left,” recently published in the newest issue of Winter Tangerine, Helal comes up with a new poetic form: “the Arabic.” This form, in Helal’s description, depends on a few requirements: “The Arabic is a form that includes an Arabic letter with an Arabic footnote, and an Arabic numeral, preferably written from right to left as the Arabic language is, and vehemently rejects you if you try to read it left to right.” For Helal’s poem, the Arabic footnote شمسية و قمرية interfaces with sun and moon and the letter ل , meaning “to” and “for.” This form’s “vehement rejection” of a reader’s colonial Anglophone directionality becomes its locus of fury and fierceness. In this way, the text harmonizes in ensemble with the various poems throughout this issue of Winter Tangerine titled “Love Letters for Spooks,” curated by editor and poet Xandria Phillips.  “The aim of Love Letters to Spooks was not for non-Black people to gain proximity to Black experiences,” Phillips notes, outlining a delineation of editorial refusal. “But for Black folks to have access to themselves free of non-Black projections. Not all deaths that Black people endure are physical.” This otherwise besides the physical and this otherwise of the access to oneself forms Winter Tangerine into an assembly of mostly Black and queer writers engaging in various refusals and anterior alterations, intense acknowledgements of the otherwise.

Under this suggested editorial rubric Phillips provides, Helal’s text shows that its concerns are with the spoken and written, the silent-but-spoken and the rejected-though-read. It ends with the word “another,” a word that collapses “an Other” to instead come through intimacy, offering a rejoinder that also suggests the poem beyond itself, a poem among poems, an initial gift that does not pretend to fulfill all supposed debts, answer all questions, perform itself unto exhaustion. “Another” is to say: keep going, and by leaning into what’s next, go back, learn history, start where you started all over.

opens the poem, Helal’s “language” both subject and object of this sentence as well as a flipping of subject/object in the phrase’s attention. To transcribe these lines backwards, which is to say from left to right instead of right to left, actually actively works to undo their refusal; or at least, refuses to see its refusal. Although the first sentence is meant to be, in its Arabic Anglophone mutation, read right to left, the second and third lines show, in their spirit of sparsity, how these directions already get scattered. “See see” is the same, or at least similar, despite direction, but its duress doubles down when we continue the logic of the first line: “see see” actually becomes four see’s, becomes a sea and a way of seeing, a way of sight reading, and the seeing of the I which learns first and second, and then purposefully confuses which arrives first and which second, tallying Arabic numerals into surreal formation. “Vehement rejection” of the logics of colonialist reading, whether late or early or wherever we find ourselves in the time of this poem. The poem asks “whither” without an answer, shows that there can be no singular answer—that to write an English-language poem using Arabic directionality is already to be elsewhere and here at the same time. It’s an out-of-joint violent violation of time and space and the unearthed sentence’s own refusal, as M. NourbeSe Philip reads Derrida’s Specters of Marx in the Notanda of Zong! Marwa Helal doesn’t want to regulate the reader so much as call forward how the reader’s state-sanctioned regulations—their supposed rules and inferences—do not place “language” as the central figuration of attention. They focus, instead, in recurring nightmare, upon the “i”, always attempting to seize the supposed subject to the detriment of the rest of the sentence or phrase.

Where does the poem go from here? Into a dream described by the speaker in the second stanza, which is also its last in this poem’s bifurcated structure. Helal writes, “no were there but / children other.” This “other” anticipates the “another” of the poem’s conclusion, while also mirroring the linguistic “other-ness” Helal describes as an English as a Second Language patronizing utterance. What’s felt in the “no were there but” is a nonperformance, in dialogue with the final sentence of Helal’s description of the poem: “As if it was a kind of weakness, nah.” “No, nah, never, not”—“Poem to Be Read From Right to Left” continually sustains, its undercurrent and overdetermined “absolutely not,” recalling that any exoneration must be instead treated as exorcism, an exercise in language re-ritualizing and demanding un-learning. The poem refuses to mask mistakes, rejects capture, and with “moon and sun to” uses cosmological positioning to sense sound among analogies of “lamb[s]” and “fox[es].” This dream imagines otherwise, imagines what is already before us. Helal’s poem in Winter Tangerine disperses and jumpstarts a storm.

Post-script:
I’d like to give one more part of the code of this poem away—there is a nod of acknowledgement to Arabic readers here—through our “sun” and “moon” letters. Only those who have studied the language would understand this. Depending on the placement of the sun and moon letters, they are either silent or pronounced.

It is strange now to think about the silent laam as I write you this. A painful and strange reminder of when I went mute during my first days of Head Start when I was suddenly immersed in this new language and world. My parents took me for hearing tests. How surreal everything felt. I came out of this muteness being bilingual. I was three years old. I don’t know how we learn language but I’m glad we do. Dreams within dreams, code within code.

Tags:Love Letters for Spooks, Marwa Helal, Poem To Be Read From Right to Left, Winter Tangerine