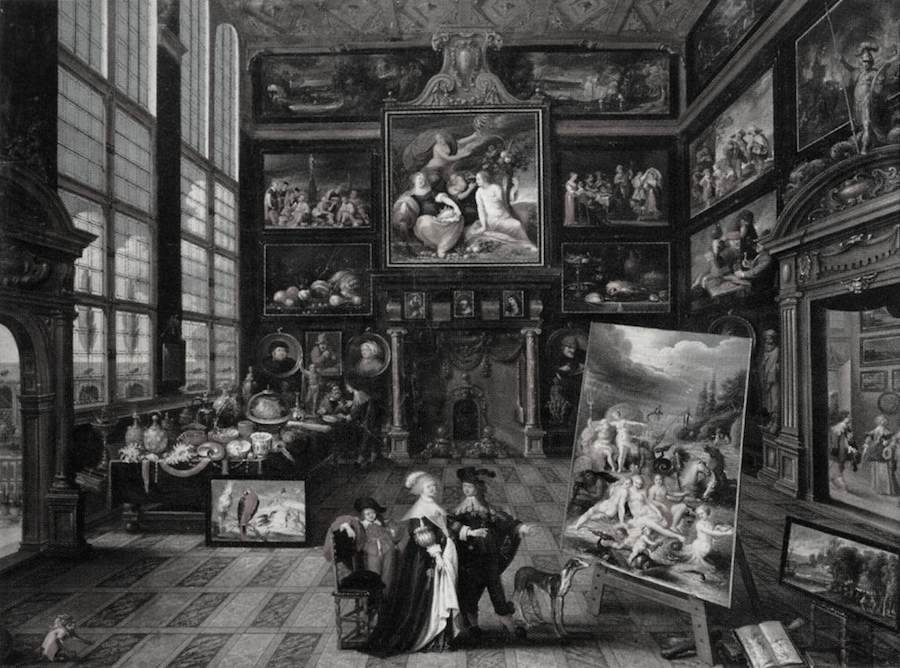 Paintings of people looking at paintings, like this one, can make me fall into a dizzy sort of hole. Gazing at the painting to find, there, painted people gazing at a painting, suddenly I’m not quite sure where I’m actually standing, where the line between me and the painting is. It’s the same effect I get from reading about characters who are reading—an effect that fascinates me. I love the strangeness, the disorientation of finding myself echoed that way.

That writers are drawn to dramatizing the act of reading isn’t surprising. Writers, after all, are readers who loved reading so much that eventually the love got too big, took possession, and demanded to become action. Beneath every powerful piece of writing is a deep well of reading (broad, too, often—though not necessarily) that fed it, and its writer. Some fiction just puts this well front and center and dunks its characters right in.

The acts of reading and misreading can actually be dramatic enough to form a story’s central action. The best example of this I know, probably, is Nabokov’s Pale Fire, a novel in the guise of one character’s commentary on another character’s poem. As Dr. Charles Kinbote “analyzes” the last great work of his neighbor, the genius poet John Shade, he shows himself to be a very particular kind of reader. Depending on your point of view, he’s either very dense, or an exaggerated example of reading’s ability to create a magical point of connection between minds: he uses the text as a lens for looking at his own preoccupations, not the poet’s. In annotating Shade’s lines, he springboards quickly into analysis, or fabrication, of his own history, and the tribulations of the king of a land called Zembla (these will end up intersecting in surprising ways):

Line 275: We have been married forty years

John Shade and Sybil Swallow (see note to line 247) were married in 1919, exactly three decades before King Charles wed Disa, Duchess of Payn. Since the very beginning of his reign (1936-1958) representatives of the nation, salmon fishermen, non-union glaziers, military groups, worried relatives, and especially the Bishop of Yeslove, a sanguineous and saintly old man, had been doing their utmost to persuade him to give up his copious but sterile pleasures and take a wife…

The poem Kinbote reads is not the poem Shade intended to write. But his own experience of reading it swallows him—and us—whole.

Nathan Englander’s “The Twenty-Seventh Man,” too, shows us the power of a central act of reading (or in this case, technically, listening). Stalin has rounded up a collection of Jewish writers for execution, and as they await their fate—and converse with one another, and learn, and break one another’s hearts—the least among them in literary stature, Pinchas Pelovits, composes a short story in his head. He recites it for his audience of fellow writers just ahead of their joint death-by-firing-squad, and somehow even in that moment, so close to the end of their real lives, these men are all absorbed in the project of imagining the lives of the characters Pinchas has created. After he has finished, Pinchas speaks to the writer he admires most, wanting to know how he’s done:

“Did you like it?” Pinchas asked.
“Very much,” Zunser said. “You’re a talented boy.”
Pinchas smiled again, then fell…

“The Twenty-Seventh Man” is a tale of horrific loss and waste—of the killing of storytellers for the kinds of stories they have told, and may yet tell. Somehow it seems both a tribute and a powerful demonstration of that tragedy to pause, within the story, to dramatize the enjoyment of a story, and to make that enjoyment spill into these writers’ death-scene.

Reading operates differently in Edith Pearlman’s “Inbound”—no specific act of reading is actually put in scene for us in the story. But questions of what it means to read, who reads what, and in what way end up forming a kind of framework, inside of which each of the story’s main characters takes his or her place. Two Harvard-educated parents have brought their two daughters—seven-year-old preternaturally gifted Sophie, and two-year-old Lily, who has Down syndrome—on a trip to see their college haunts. They take the subway to visit the library; Sophie’s doting, proud father expects her to love it, but in fact it alarms her, because there are “Too many books! Too many even if the print were large.” Then they head toward a restaurant for lunch, but along the way, Sophie gets separated from the others and lost. Everyone is terrified. While Sophie’s parents try desperately to find her, she seeks shelter at a kiosk full of foreign-language newspapers. Looking at the words, she has a vision of her future:

…she let her eyes cross slightly, the way she wasn’t supposed to, and she melted into the spaces between the paragraphs until she entered a room beyond the newsprint, a paneled room lit by candles, walled in leather volumes, the way she had wanted the fifth-biggest library to look. Though more books had been written than she could ever read—she had realized that as soon as she saw Section 4 East—she would manage to read a whole lot of them, in golden dens like the one she was seeing. She would read as many as her parents had read. She would grow as large as her parents had grown…
…Lily would learn some things. Mostly she would learn Sophie. They would know each other forward and backward. They would run side by side like subway tracks, inbound and outbound. Coextensive.

Fast upon the heels of her realization about her destined time in the “golden den,” Sophie also realizes that this den won’t admit everybody. Because this door—and some others—will be locked against her sister, she herself will have to learn a very different kind of reading, as well, outside. This reading too will have its challenges and its rewards.

Reading has a different part to play in each of these stories. Pale Fire unfolds through a dramatized act of reading; “The Twenty-Seventh Man” uses reading to underscore loss, and honor it; “Inbound” uses its characters’ relationship to different kinds of reading to capture them for us. Each of these stories, in its own way, harnesses the drama of reading to its own narrative. For a usually silent act, reading does contain great reserves of drama, as any reader can tell you. Seduction plays a role in that, and risk. And the funny, tricky way a book can have of becoming, suddenly, a mirror.