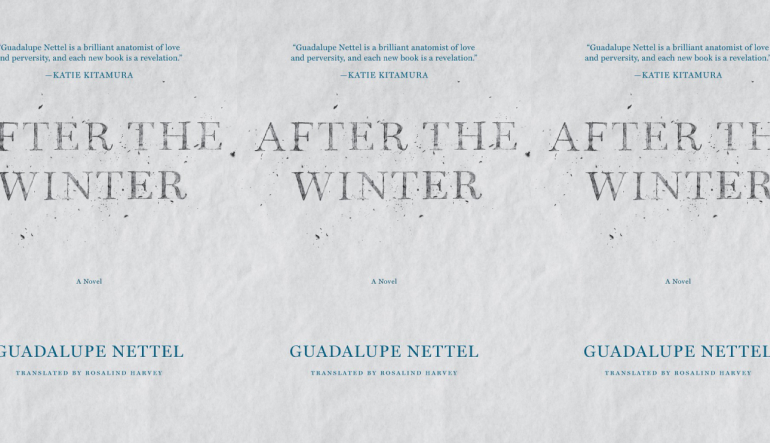 Guadalupe Nettel’s novel After the Winter, her third book of fiction translated from Spanish into English, is a trenchant, subtle story about two people struggling with companionship and isolation. The novel is narrated in short, alternating chapters by the Cuban-born Claudio and the Mexican-born Cecilia, who tell us about their compulsions and relationships (or lack of relationships). Eventually their narratives intertwine, with surprising results. The novel moves with ease between New York, Paris, Havana and Oaxaca. Nettel, born in Mexico, has spent much of her life abroad, though she’s currently based in Mexico City. Her writing, in an excellent translation by Rosalind Harvey, is spare, occasionally eerie and always elegant. Her investigation of love and solitude, and what these two states can mean, is shaded by her protagonists’ unconventional behavior, contributing to the novel’s distinctive exploration of its age-old subjects and its moving interplay of humor and sadness.

At the novel’s start, Claudio is in New York, having left Havana years before. On the first page, we learn that his Manhattan apartment is a “stone corridor very much like a prison cell” and that living things inspire in him an “inexplicable horror.” Late in the novel, he makes a confession. “I want to be an infallible machine!” he shouts in a crowded restaurant, to the consternation of his companion (his sole male friend in New York). Claudio is in crisis at this point, but his declaration is a natural extension of his austere, rigid lifestyle. An egoist, he is dismissive and manipulative in his treatment of others, including his older lover, Ruth, who he refers to as “the old thing.” Claudio’s narrative, deftly handled by Nettel, has a sharp comic edge. For example, Claudio, who avoids the slightest contact with his neighbors, remarks: “Politeness can also serve as a gateway to intimacy and, needless to say, there is no shortage of opportunists in the world.” However, the book’s humorous streak masks dark truths. Late in the novel, revelations about Claudio’s Cuban youth suggests his self-discipline has a repressive function. Some of the novel’s more vivid sections depict his early romantic encounters in Cuba, which begin when another family is sent by the Revolution to share his family’s house.

Cecilia’s narrative forms a counterpoint to Claudio’s, creating a richly textured, braided work. Whereas Claudio is strict and intense, Cecilia is pensive and often uncertain. “I was the spectator of a film whose beginning I could no longer remember,” she tells us. At the beginning of the novel, oppressed by the “constant clamor of Mexico,” she obtains a French study grant and escapes to Paris. She knows no one in the city, and though she befriends a female student with a Cuban father and French nationality, she slips gradually into a reclusive life. She is obsessed with graves (she finds a Parisian apartment across from a cemetery), and she grapples with antisocial tendencies. The novel follows her as she starts a tentative relationship with an ailing Italian-born man. The pleasures of Cecilia’s narrative are, in part, the pleasures of a precisely detailed, meditative account of a peculiar consciousness exploring Paris. She describes “being made a casualty of the city’s resounding rejection.” And after regularly watching the cemetery across the street, she discusses how “each funeral has its own personality and style.”

When Claudio and Cecilia meet, about halfway through the novel, the encounter proceeds in a manner that’s deeply enjoyable, with distinct and revealing accounts by each narrator. Because Nettel has so skillfully mapped her characters, the unfolding of the relationship feels both unexpected and inevitable. The meeting has a far-ranging effect on one of them. However, it has a superficial impact on the other. This may disappoint some readers, but it’s a testament to the strength of Nettel’s vision. Her novel is more interested in fidelity to her characters than a neatly consequential plot twist.

Because of their position as foreigners and because of their personalities, Claudio and Cecilia are consigned to being outsiders. This is reflected in their names, both of which suggest abnormality: “Claudio” is associated with the Latin word for “lame.” Likewise, “Cecilia” traces to the Latin word for “blind” (Claudio, enchanted by Cecilia, identifies her name with the blindness of love). Critics have mentioned Nettel’s focus on the marginal and abject. In the autobiographical novel The Body Where I was Born, her second work of fiction translated into English, the narrator feels a kinship with cockroaches. Nettel was born with one eye that was smaller than the other; in her childhood, she only had ten percent vision. She has said this is why the theme of normality/abnormality interests her so much.

Nettel has discussed her admiration for the Argentine writer Julio Cortázar, who like her lived in Paris. In an interview, Nettel said, “I share the idea with Cortázar that the fantastic constitutes a part of our daily life and that it is possible to discover it or, at least, glimpse it if we are alert at its doors.” On the surface, After the Winter seems to have little connection to Cortázar’s strand of the surreal. Yet Nettel’s hypnotic writing infuses the everyday worlds of her characters with a similar resonance. Claudio talks about New York’s “nocturnal murmur,” for example, while Cecilia, in Paris, explains that absence prevails “like a toxic rush of water spilling over uncontrollably, soaking everything.” In After the Winter, Nettel has fashioned a powerful and luminous novel, one that portrays absence, presence and human imperfection with a unique and penetrating voice.