There is no better way to pass the coldest season of the year than by cozying up with a good book, and 2015 has started off with a bang. Here are our picks for this winter’s best literary offerings. 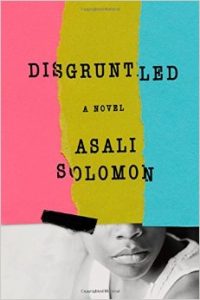 Meet Kenya: acute observer, recurrent sleepwalker, a young woman who feels the shame of being alive. Growing up in West Philadelphia in the 1980s as the daughter of a man obsessed with Frank Lloyd Wright’s butler, Kenya straddles her father’s subversive world and the more stable life her mother desires. After the abrupt dissolution of her parents’ relationship, Kenya attends a mostly white girls’ prep school where she’s forced to learn how to navigate a world she doesn’t have the freedom to call her own.

As she grows, Kenya’s mother and father take turns rescuing their daughter and needing to be rescued by her. Her imprisoned father doesn’t send a single letter; instead he entrusts her with the beginning pages of his novel. Her mother becomes increasingly oblivious as Kenya dodges the lecherously cheerful eye of her stepfather.  She falls for a young artist who is only interested in white girls, she takes a chance and befriends an estranged sister, and she learns the weight of a gun in her hand and the shock of pulling the trigger.

A cutting and contemplative coming-of-age story, Disgruntled deftly charts the lonely terrain of self-discovery and the impenetrable bonds that ever beckon us homeward. 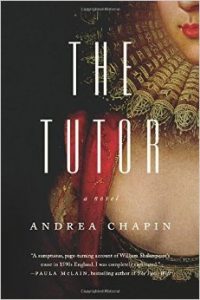 Calling all Shakespeare fans! If you enjoy stories about the Bard, historical fiction, or novels about the act of writing itself, then The Tutor by Andrea Chapin needs a top spot on your TBR list. Set in 1590 when little is known about Shakespeare’s whereabouts, The Tutor draws us into the world of Katherine de L’Isle, a thirty-one-year-old widow whose literary acumen and forthright sensitivity catch both the eye and the quill of history’s most beloved playwright.

Young Shakespeare bursts on the scene at the Lufanwal estate with such mercurial charm, the reader can’t help but love and mistrust him in equal measure. When the family’s beloved priest is murdered as a result of the rampant Catholic persecution set in motion by Queen Elizabeth, Shakespeare steps in to tutor the estate’s children. But soon Kate easily schools him as she edits countless drafts of his narrative poem Venus and Adonis, a ballad that grows to reflect the texture of Kate and Will’s fierce and tumultuous relationship.

The Tutor is much more than a tale of forbidden love; it’s a peek into the mind and heart of an ardent young woman who inspired a literary genius to chase down his own greatness. Even more so, Chapin’s novel is a celebration of those ephemeral connections that transform ink and parchment into immortal works of art. 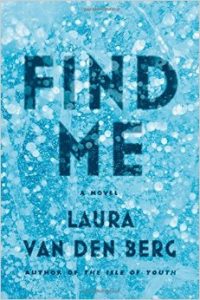 When deadly memory loss sweeps the nation, Joy—a loner with a past that includes a slew of foster homes and a Robitussin addiction—finds herself immune to the disease that’s killing almost everyone around her. She abandons her hapless life in Boston when she gains admittance to the Hospital, a place in Kansas committed to recruiting the immune in order to find a cure. But a life populated by locked doors, eerie medical procedures, and a staff with secrets of their own soon reveals that a sterile existence at the hospital is no less dangerous than the infected world beyond its walls.

Joy breaks free and begins a labyrinthine journey to Florida in search of the mother who deserted her twenty years before. The lean, post-epidemic world unfolds around her, stocked with criminals for hire, eccentric scientists, and clairvoyant sojourners in rabbit’s masks and angel’s wings.  As Florida draws near and the surrounding psychological climate turns from strange to lucid and back again, Joy is forced to reckon with her own memories that she’d rather forget.

A masterful novel that reads like a fever dream, Find Me is a hypnotic meditation on memory—what’s at stake in losing it and what is lost in keeping it. 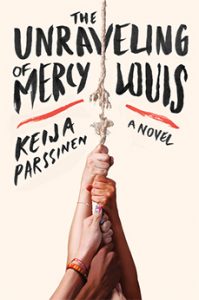 The Unraveling of Mercy Louis

Something eerie has settled over Port Sabine, TX, and it’s more than the fallout of the oil refinery accident four years ago. The summer before her senior year, Mercy Louis prepares for her final high school basketball season while hysteria swells around the spiritual apocalypse her grandmother swears is coming at the end of the year. When a deceased fetus is found in the garbage and the town grows hungry for a culprit, it doesn’t take long for each of the girls at the public high school to turn from student to suspect.

It’s tough to be a girl in Port Sabine. Young women must remain pure, look pretty, work hard, and keep their sins hidden. Who wouldn’t crack under the scrutiny? After the school year begins, a mysterious body tremor strikes one girl, then another, then another, and the outbreak begins with Mercy. Without a mother and with the whole town counting on her to bring home a winning season, Mercy needs to find someone she can trust. Is it Illa, the wallflower who is always watching, or is it Annie, Mercy’s self-involved best friend? Or maybe it’s Travis, the young man who causes Mercy to question her two first loves—religion and basketball—but makes her feel alive for the first time.

The Unraveling of Mercy Louis is a page-turning oracle of a novel and a chilling reminder of the consequences rendered when young women are exalted as pillars of perfection and demonized for daring to be human.