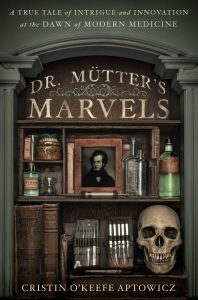 As a schoolchild in North Philadelphia, Cristin O’Keefe Aptowicz went on class trips to the Mütter Museum in Philadelphia, which housed a collection of medical artifacts and oddities, many of which had been amassed by Dr. Thomas Dent Mütter, a physician at the turn of the nineteenth century. Aptowicz, a poet who is also the author of another nonfiction work (Words In Your Face, a history of the spoken word movement), became intrigued with Mütter, and researched his story.

And what a story it was. Orphaned young, he traveled widely and acquired skills. He faced up to the establishment of the time, overcame opposition and became one of its most celebrated members, only to die tragically young.

The subtitle, “A True Tale of Intrigue and Innovation at the Dawn of Modern Medicine”, indicates Aptowicz’ dual focus in her book. She offers a tale of Mütter’s life and his innovations, both in close-up and in panoramic views, telling a compelling story of medicine during a transitional phase, and of one person’s enduring influence, by combining extensive research and deft expression with the pacing and detail of a densely plotted thriller.

That Mütter is to be credited with innovation is clear. Aptowicz contrasts Mütter’s medical practices with those of the Philadelphia he’d arrived in, fresh from studying with pioneering plastic surgeons in Paris. In Philadelphia, doctors sometimes performed several surgeries in succession without washing or changing; operating in a coat smeared with the previous patient’s blood was considered macho. And surgery, from minor to the most difficult, was performed without the benefit of anesthesia, other than a swig of alcohol to buffer the pain. Among his other conclusions that ran counter to accepted practice, Mütter stressed the importance of cleanliness of the surgeon’s hands, garb, and instruments. He was an early advocate for the use of anesthesia in surgery. A gifted and generous teacher, Mütter also treated his patients as people, not objects.

Aptowicz discusses Mütter’s innovations in context of the world he lived in and paints a vivid picture of that era. Though exhaustively researched, the book never becomes academic or dry because of the author’s vivid style. The reader stands in the amphitheater, craning with the rest of the medical students, while Mütter performs complex surgeries so quickly it’s difficult to follow, especially as he’s ambidextrous and uses both hands. The author then shifts perspective to the burn victim patient, praying for a positive outcome so she’d no longer be shunned as a monster, girding her strength to sit still for the gruesome procedure.

The author makes good, too, on her promise of “intrigue”. She adds suspense and conflict to her tale by her treatment of Mütter’s longtime rivalry with an established medical leader of the day, Dr. Charles Miegs, whose personality, philosophy, and procedural practices were diametrically opposed to those of Mütter. An example of this can be seen in her description of a demonstration Miegs was wont to perform for his students. A strong opponent of anesthesia (in part because he believed pain, particularly of that of women in childbirth, was God’s will), Miegs was known to lead a sheep into his operating theater, and, with all of his students assembled, etherize the animal until it died. Aptowicz tells of one such demonstration where Miegs had given the sheep ether, and was waxing eloquent about the lethal nature of the anesthesia.

And as he looked into faces of his students and saw them enraptured, he felt the power of his position—a position he deserved and had earned.

And it was in that moment that it happened: a slight moan, barely audible, rose from the back of the amphitheater. It was low and almost human.

Miegs froze as he tried to place the sound and trace it to its origin. The only movements in the room were Meig’s eyebrows slowly gathering at the center of his face.

Cristin O’Keefe Aptowicz brings a keen sense of drama, as well as her poet’s imagination and specificity of language, to her tale of Mütter’s life, and offers fascinating information about the practice of medicine at a crucial juncture between magic and science. Her enthusiasm for the man and his work shines on every page of her book, and by the end, she’s entertainingly provided ample evidence for her thesis that Mütter was a major medical innovator.