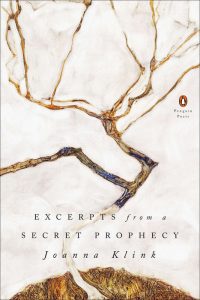 As a stopped clock is right twice a day, so book blurbs are right a few times a year. On the back cover of Joanna Klink’s fourth book, Terrance Hayes declares, “As soon as I finished this beautifully unassuming and assured book, I began reading it again,” and for once this familiar hyperbole turns out to be just; the collection feels so whole and cohesive that on finishing one immediately goes back to read the opening poems with more attuned eyes. Likewise, the jacket copy’s phrase about “a self fighting its way out of isolation, toward connection with other people and a vanishing world” describes the energy of these poems accurately, if a bit melodramatically.

The wholeness and cohesion come about by a variety of means. The turns in the figurative language consistently surprise without ever seeming strange for the sake of strangeness, always mysteriously right:

no light of the fixed stars, no flashing in the eyes,
only heather pared by the dry air, shedding
a small feathered radiance when I looked away,
an expanse whose deep sleep seemed an unending
warren I had been given […]

Images (moon, sea, snow) recur, and five different poems are titled “The Graves,” but the unity is mainly a matter of sensibility and tone: a lyric sensibility almost painfully alive to beauty, stretched tight by an intellect that simply will not relax—the tone of some of Laura Riding’s poems of the twenties, or of Jorie Graham’s of the eighties, or of the Rhoda sections in Woolf’s The Waves (which provides Klink’s epigraph).

Or of Eliot. The book’s first poem, “Elemental,” echoes Four Quartets, that great poem of arriving at middle age to find it brings neither serenity nor security but richer confusions, more urgent and more unanswerable questions. “I brought what I knew about the world to my daily life,” the poem begins, “and it failed me.” The “I” in the book is mobile but reads as a single, unified consciousness that in the middle of life’s journey found itself in a dark wood: “I walked for hours in those forests, my legs a canvas of scratches, / trading on the old hopes—we were meant to be lost.” Connection is sought but proves elusive, whether it be to the natural world—“Terrebonne Bay” is a despairing poem about the Gulf oil spill—or to the “you” of the poems, who seems at times to be a partner whose relationship with the “I” has come to a crisis (in “Aubade” and “Report on Fire”), but often seems to be a second self, perhaps a past self, an internal other who may hold some key to understanding the present self:

“To be another / person than the one / you were before means / more than I can understand,” Klink writes, in a voice plainer than Eliot’s, but sharing his bafflement at the enigmas of the passage of time.

Eliot turned to Christianity for an anchor. Excerpts from a Secret Prophecy does not, as Four Quartets does, invoke Mary or the Paraclete, but the imperative mood that occasionally turns up in the early poems (“If there is rarity in me, signal the course”) by the end sounds a bit more like the subjunctive mood of prayer (“If there is a world, let me be in it”), and in the closing poems we hear a power to affirm (“I believe I am here”) that, attenuated though it is (like the Egon Schiele tree branch on the cover), feels earned.