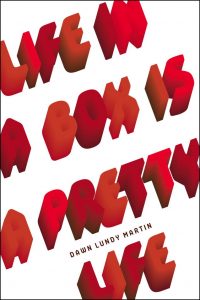 Dawn Lundy Martin’s two previous collections, A Gathering of Matter / A Matter of Gathering (2007) and Discipline (2011), were remarkable both for the rigor of their investigations of identity (family, ethnic, political, gender, and sexual) and for the formal risks she took in conducting those investigations.  Martin’s poetry is a high-wire act, a combination of audacity and control, and she likes to work without a net.

Her new book’s title raises the specter of confinement—a circumstance that occurs throughout her text, not only in imagery drawn from slavery and incarceration, but also in the citing of discourses designed to contain and set limits. Hegemonic voices periodically run vertically down the page, like prison bars:

“The Irish, the
Iberian, and the
Negro are of
low
prognathous
type,”

is paralleled elsewhere by a diagnosis of “nymphomania.” The text’s first-person voice wants to believe there is an elsewhere, but the way to it is hard to find: “We labor in our attempts at rebirth. Remain inside enclosure, wood box.”

This is interesting enough, but Martin raises the stakes. The book as a whole engages artist Carrie Mae Weems’s “Framed by Modernism,” a series of photographs that critiques the relationship of male artist and female model while at the same time reproducing it: a critique that acknowledges its weird complicity in what it analyzes. Once we realize that we are marching our bodies through socially scripted performances, do we then have a chance of freeing ourselves? Lundy does not take it for granted that we do. When she declares that “A boy is not a body. A boy is a walk”—that “boyness” is not an essence, not an inalterable natural fact, but a performance—a liberating possibility opens. But realizing the possibility can be elusive:

As the title ironically suggests, sticking to the known and recognizable sometimes seems easier, less effortful. Why not go along to get along, settle for that pretty life? But it won’t do, really—“we inhabit the brutal. We are shattered every day”—and the hard work of resistance and re-invention has to go on.

A body is a piecemeal accumulation. It’s already fraught. We attempt to construct a wholeness. No debris. No breaking off eastward.

To button up in a tight gray sweater what has been released.

The surprise of the dry humor at the end of the passage—we get a realization, followed by a resolution, followed by the deflating awareness that it’s getting cold outside and we need another layer—may be Martin winking at us from her high wire.