Home
»
Book Reviews
»
Nonfiction
»
REVIEW: Belief is Its Own Kind of Truth, Maybe by Lori Jakiela 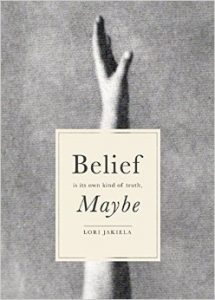 “The doll in the woman’s hand looks a little like my daughter—blonde, rosy-cheeked, green eyed,” Jakiela writes, “—which means she looks like me, too, and probably like my sister and probably my birth mother and so on.”

The doll strikes her as a metaphor, “a tiny sarcophagus, a little hollowed out self” that “fits into another tiny sarcophagus, a series of tiny sarcophagi tucked into other sarcophagi, selves into selves, until they end up with a larger self that looks whole but isn’t.” Through such metaphors and a fragmented, lyrical style that reflects the writer’s background as a poet, Jakiela communicates the sense of a fragmented self experienced by many adoptees with little information about their origins. “An adopted person’s story is someone else’s secret,” says Jakiela, the author of two previous memoirs. A laugh-out-loud funny writer in much of her earlier work, Jakiela shows herself to be equally at home in this compelling and poignant story of her search for her birth family and for her place in the world. Jakiela launches the search for her birth mother after her “real” mother dies, with the goal of getting information about family medical history. She recalls a childhood as a much-loved daughter who nevertheless didn’t quite fit in: “I am not a model orphan. I am moody and outspoken. I lack gratitude. . . . I have been known to eat the last piece of candy in the box.” She wonders about the origin of her own love of language, which sets her apart from other members of the family in which she grows up. Nevertheless, as she embarks on her search, her expectations are low: “Sometimes stories are happy, like on TV. Sometimes they’re not. Most times, not,” she says. And Jakiela, who is honest about her own imperfections and self-doubts as a mother, also courageously confronts the less happy aspects of her journey, the anger and cruelty she encounters from members of her birth family and her own anguish. As she compassionately attempts to reconstruct her birth mother’s story, forges bonds with birth siblings, and recognizes the strength of the connections she has made for herself in the family she has created, Jakiela begins to come to terms with her background. And throughout, her love of language remains uniquely her own, enabling her to weave a beautifully-crafted tapestry of image and insight that ultimately enables her to string together a fragmented self.