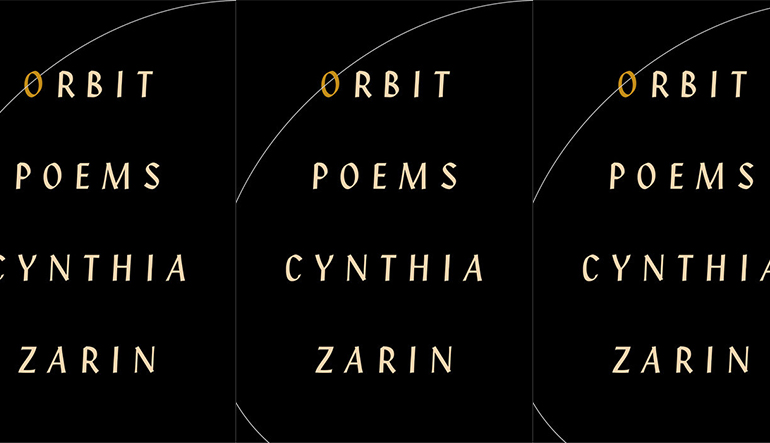 An object in orbit has a velocity and trajectory of its own, but also responds to the pull of the gravitational field of another object. It is suspended, in a sense, but also in motion—a handy metaphor for many aspects of our lives, which sometimes feel like a headlong plunge into the unknown future, and other times seem obedient to the pull of the past—of memory, of home.

The title poem of Cynthia Zarin’s Orbit is a sequence of fourteen sonnets that engages its astronomical metaphor in several ways. On the one hand, to write (or to read) a sonnet is to feel the tug of tradition; form has its own gravitational field. But Zarin’s sonnets embody a dream-logic that obeys a physics of its own:

Shellacked with ice, the street a cracked snow globe
whose magic pool drips serum. Mystery or venom?
Reading aloud in our cocoa-cum-coffee cloud,
Miss Stanton, stepdaughter of Woking, Surrey,
drops her veil. It’s not sorrow she feels, but terror,
then comedy—the bull butting his maze
of twigs, the baboon rattling the bedroom door,
Is love labor?

The sonnets speed along, as here, at something approaching escape velocity, leaping from association to association, but at the same time feel held by objects recalled, books read (A Girl of the Limberlost, Mrs. Dalloway), by their own sounds (“Where I am / met is meat”).

Zarin’s sentences often use absolute constructions to pack in detail—e.g., in the quoted passage, “the street a cracked snow globe,” “the bull butting his maze,” “the baboon rattling the bedroom door.” As non-finite clauses, absolute constructions are not pinned down in time to past, present, or future. They peculiarly suit the sequence’s evocation of the gone-but-here, vanished-but-powerful images that somehow still hold us. The sequence ends with a flurry of them:

Where are my happy loves? Right from wrong,
the simple past, asperity a rough
Venus, a mermaid and her twin seal
self, the blood red wax that stamps the letter
a welt on her fern tail, an x marking
the spot where the light was.

History creates another kind of orbit. “The past’s fantasia cannot hold or let / us go,” is the line that begins “The Muse of History,” another sonnet sequence, its individual poems all bearing epigraphs from Psalm 137, about the anguish of remembering Jerusalem while in Babylon. Love, the subject of several of the poems in the last third of the book, likewise creates its own recurring patterns, as though partners were each other’s satellites.

The volume has its own points of gravity that, comet-like, it revisits as it moves forward. The selkie, for one, the North Atlantic folklore creature that goes between sea and land, seal-form and human-form; for another, the spirograph, the art-toy that creates astonishing designs by circling within circles. One such design appropriately serves as frontispiece to Orbit, testifying to the extraordinary cumulative effects of our patterned departures and returns.